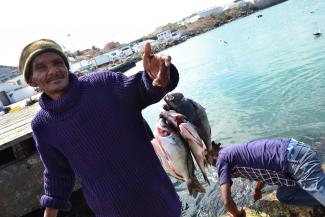 Traditional knowledge is rooted in Indigenous lifeways and relationships with the environment and is valuable not only to Indigenous Peoples, but to all societies. It must be protected and supported and emphasis must be placed in transmitting Indigenous knowledge to future generations. It is no coincidence that 80 percent of the world’s biodiversity is found on Indigenous territories. Indigenous languages, skills, and techniques provide valuable information to the global community and serve as a useful model for solutions to contemporary issues.

UNESCO, in the framework of joint work with the Internal Council of Science, has proposed to define traditional knowledge as “a cumulative body of knowledge, know-how, practices and representations maintained and developed by peoples with extended histories of interaction with the natural environment. These sophisticated sets of understandings, interpretations and meanings are part and parcel of a cultural complex that encompasses language, naming and classification systems, resource use practices, ritual, spirituality and worldviews.” Often transmitted orally from generation to generation, traditional knowledge is collectively owned and includes stories, songs, folklore and proverbs; cultural values, beliefs, and rituals; community laws; local languages; agricultural, horticultural, hunting and fishing practices, forestry and environmental management.

This year’s theme at the 18th session of the United Nations Permanent Forum on Indigenous Issues (UNPFII), which took place April 22–May 3 in New York City, was “Traditional Knowledge: Generation, Transmission and Protection.” Discussions at the Forum highlighted the urgency to protect, promote, and revitalize Indigenous languages as they are rapidly disappearing, and the need for States to protect Indigenous Peoples’ traditional knowledge systems as they directly contribute to sustaining biological diversity, food security, conflict resolution, and cultural diversity, and are key in fighting the impacts of climate change.

The following are excerpts of interviews conducted by Cultural Survival’s Indigenous Rights Radio producers with delegates on the topic, condensed and edited for clarity. Listen to our radio programs with Indigenous leaders at cs.org/rights.

• Our Existence Is Dependent on Us Being Land Caretakers
Les Malezer

• Media as a Means to Transmit Indigenous Knowledge
Kenneth Deer

• The Intellectual Wealth of Indigenous Communities Is Being Misappropriated
Elifuraha Laltaika

Listen to our Indigenous Rights Radio Programs on Traditional Knowledge:

Many Indigenous Voices, One Message: Traditional Knowledge Protects Mother Earth!
We are living in a time of crisis. Scientists, farmers, Indigenous Peoples, and even the United Nations all agree that humanity’s impact on the world’s ecosystems and natural resources has brought us to a turning point. If there is no intervention, the planet faces the mass extinction of up to 1 million plant and animal species due to pollution, habitat loss, and climate change.

This program consists of commentary from Indigenous leaders such as Les Malezer, advocate for the rights of Aboriginal and Torres Strait Islander Peoples of Australia; LaDonna Brave Bull Allard,  Lakota historian;  and Ben Ruli from the Gimi people of Papua New Guinea.

Though collaboration is crucial to finding solutions for climate change, Indigenous People must be able to maintain, protect, and control their cultural heritage, sciences, and technologies. The UN Declaration on the Rights of Indigenous Peoples provides a legal framework for intellectual ownership by Indigenous communities of their traditional knowledge. However, many additional cultural barriers to equal-footed climate change collaboration exist, such as the automatic devaluation of Indigenous science by Western science practitioners.

Top photo: A small scale fisherman of Khoi descent holds a fresh catch, Saldanha Bay, West Coast, South Africa. Fisherfolk have been on the frontlines of climate change, and traditional knowledge
has helped many communities mitigate its impacts. Photo by Shaldon Ferris.