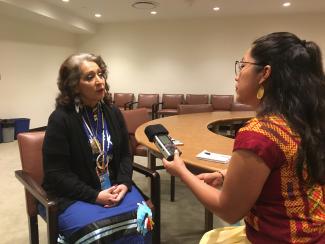 I am from Cannon Ball, North Dakota, and I live right above the Cannonball River, which connects to the Missouri River. We live at the mouth of the river in a place that has been inundated by the Army Corps of Engineers when they flooded our land. We have had to move from our bottom lands onto the hills.

We understand what survival is. In 2014, we were notified that the Army Corps of Engineers was going to build a pipeline right on our land to the Missouri River. We are still trying to recuperate from them moving us from our homes up into the high areas. We lost our gardens, our forests, our trees. We went into an economic decline because they closed all of our businesses, our stores. We are trying to survive from that as we are still a hunter-gatherer people. We still gather all our medicines, all our plants. We know how to live on the prairie. We know how to live in a climate where it’s nine months in snow and cold. When the government comes in and does things to the environment, it is devastating not only for our people, but for all the wildlife.

We decided it would be a good idea to fight; we had no other choice but to stand. And so we started with our young people who taught us how to do social media, who taught us what we needed to stand up. They came into our communities and showed us how to do direct action with non-violent resistance, how to de-escalate situations. We did a lot of training and a lot of education before 2016 when the camps were built.

The camps existed for almost 10 months before the state, the police, and the military came in and removed the people by force. In between that time, people who stood up in song, dance, and prayer were being attacked by live rounds, tear gas, percussion grenades...they had machines that took out our phones. We were surrounded by a whole military entity. We watched our community as they killed the buffalo, they killed the eagles, they killed all the animals in their path.

My people are not asking for any special rights; we’re just asking to live. We have a right to live. After the camps closed, one of the first things we did was we went down to where the camps were located and we did massive cleaning. We go every two months to do prayer ceremony. There were native flowers and plants that hadn’t grown in the area for a long time because there were cattle in there. The land reclaimed itself. It was the first time I thought, ‘Humans have a right to live here if we live with respect for the earth.’ The places where we had the compost, squash and melons grew all over. We carried out truckloads from the camp to deliver them to the communities. With that, we thought, ‘We can do this.’

We have developed community gardens. We have delivered woodstoves to get people to stop using fossil fuels. We are telling people to grow their own food. We are taking young people to go out to gather our traditional foods, our traditional medicines. We’re also teaching young people how to dry the food, how to prepare it. We dry meat, vegetables, our medicines. On January 15, in the community in Cannon Ball that was located right above the camp, they flipped the switch to the solar farm that has been developed and now their community will be solar. And at Sacred Stone, which continues to thrive, we developed portable solar trailers that have wind, solar, and water purification systems. We can pull them in and plug in a house. There are many people who can’t afford electricity nowadays on the reservations, so we can provide electricity. We are working on developing ecofriendly straw bale homes. We have lots of wind and it’s cold, so our traditional homes are made to stand in that kind of weather. We’re encouraging people to go back to their traditional homes because they’re healthier to live in and they work with the environment.

I have been encouraging people to live with the earth. Pick up trash in your waterways. We did 140 acres of shoreline garbage cleanup along the rivers. We brought all the children in to pick up garbage, and we took two semi loads of glass out. If you just pick up garbage, it’s a simple thing to change the world. We’re going to do a huge tree planting because we lost so many trees when they flooded us, when they built the dams.

To change the world, you put one foot in front of the other and you do the work. I learned a lot from this. I learned that we cannot wait for no government, no program, no Tribal governments. We have to do it ourselves. I’m developing a model, Community Working with Community, inviting people to come do a cleanup, to sit down and talk with each other, to tell stories. Our stories help us with morals and values and how we should live our lives. In the wintertime we have these huge round tents and yurts, and people come in and just tell stories about life a long time ago, living on the river, talking about life when I was young, to help the kids be a part of the community. We are hosting workshops on how to make ribbon skirts, how to dry meat, how to make drums, how to make tobacco, soap. If we continue to talk about it, it’s not going to get done. We have to just do it. As Native people, we learn better doing it, working with our hands, rather than somebody sitting there talking about it.

One of the things that I learned about what happened at Standing Rock is who controls the media, controls the world. We have a whole group of young people teaching us and learning how to produce and edit their own videos and put them out there so we can actually show our lives to people that are outside. People forget that we live. We become invisible in the rest of the world. When our young people take control of the media, people can see that we are alive. We are living beings.

The other thing that I learned was there is no separation of people. When all the people came to stand with us, from the tip of Argentina to the tip of Canada, I was honored and blessed to see with my own eyes  prayers and ceremonies from every one of the Tribes. People bringing water to my river to clean it. The gathering of people in one place, with one mind and one heart, I’ve seen it. I know it can be a reality. I know we can do it. I’ve also seen all these religious groups, Muslim, Hindu, Sikhs, Catholics, Protestants, Buddhists, stand in one prayer. To me, that was the most amazing thing, despite all the things that they did to the Water Protectors. I’ve seen amazing healing. I’ve seen young folk come with purpose and understanding about who they are. The first time they were able to sing ceremonial songs. The first time they ever said a prayer. The first time that they felt like they belonged. Because sometimes our young people, because of all the historical trauma, live very hard lives. When they were there, they felt like they had purpose.

We told everybody who came in, the first thing we would say as they passed through security, ‘Welcome home.’ When I was young I used to say my grandma, ‘All I want is a home, a place.’ She would say, “What are you talking about? The minute your feet touch the earth, the roots grow right out of your feet. You are home. This land is our home. You have always been home.” We told everybody who came into camp,‘You are home.’ To find that connection, that’s the whole key to what we’re doing, bringing that connection back to the earth, back to the water, so that people will stop abusing the earth and the water. The first act of sovereignty is to grow your own food. Care for yourself. Don’t wait for somebody to come save you, because it’s not going to happen. We must stand up and save ourselves. We have a right to live.