Media as a Means to Transmit Indigenous Knowledge 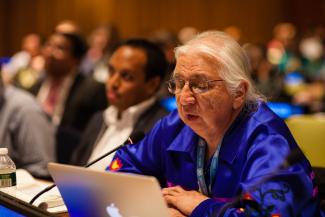 Media can be one of the means to transmit this Indigenous knowledge from elders to the younger ones. We have a tremendous opportunity to record our knowledge because in the past, it was always transmitted orally and by showing people. Indigenous people are very visual people. We always keep that in mind when we transmit knowledge, that sometimes we have to do it visually, because in previous centuries we didn’t have writing. Now we have this opportunity to use modern media to do it in a different way. You can do it in print, you can do it through audio and video recordings. What we have to be careful when using the internet, that knowledge becomes public domain. We have to be very careful about what we put on the internet. If you put a sacred ceremony on the internet, then everybody has access to that sacred ceremony. They can use it, they can mimic it, so there are some things that should be restricted. If it’s sacred to you, it should only be shared with certain people.

Indigenous knowledge is important and it needs to be documented. On the other hand, there is also a challenge for protection. Take Indigenous medicines: our elders have certain medicines, they know certain plants and herbs that are beneficial and that’s something that’s been handed down from generation to generation. If they put that on the internet, then the pharmaceutical companies can take it and patent it. They’ll make millions of dollars and you’ll get nothing. You have to be very careful about how you transmit that information.

One of the biggest challenges we’ve had is the loss of language. This is the year of the world’s Indigenous languages, so there’s extra emphasis on languages this year. For decades now, we have been trying to save our language because our language (the Mohawk language), the Canadian government has tried to destroy and undermine it. When I went to school I was not allowed to speak the language and it had a tremendous impact on me. This policy has done a lot of damage, and the Mohawk language is still an endangered language. For decades now, we have been teaching it in our schools. We have Mohawk immersion programs from nursery school and Kindergarten up to Grade 6. We even have adult immersion programs now for people who want to learn the language. We’re doing a lot to protect the language.

Our biggest concern is the loss of traditional knowledge from our elders. Every time an elder passes on, a little bit of that knowledge is gone, like the language . . . maybe that elder has a few words that only he or she knows, that when they pass on, that’ll be gone. We have to get our elders, our knowledge keepers, to teach us all that they can, and we should be there to listen to them and make the decisions about how we’re going to pass that on. Make sure you get all the information you can out of your elders so you can pass it on to your children and your children’s children.