“NO” to the Companies Within our Ancestral Territory 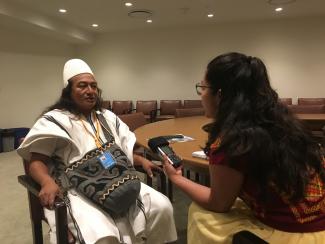 I belong to the Arhuaco community of the Sierra Nevada of Santa Marta, Colombia, but there are three other ethnic groups that also live in the northern part of Colombia in the Sierra Nevada of Santa Marta at 5,800 meters above sea level: the Wiwas, the Koguis, and the Kankuamos. There are problems of jurisdiction, as we do not belong to any of the departments. There are three Indigenous resguardos that face the problem of mining in the Sierra Nevada. The Indigenous Peoples of the Sierra in 1973 advocated, together with the Mamos, who are the Spiritual Leaders, to be recognized as an ancestral territory, a matter that ended in a victory and established sacred sites in the four cardinal points.

Our town has a total of 57,000 people, but where we work consists of 12,000 inhabitants. The Forum is a small Indigenous organization that works in the Arhuaco sector. I work and advise in the traditional recovery part on laws and policy with the special jurisdiction for the Indigenous Peoples of the Sierra Nevada, specifically the Arhuaco. The legal cases that I see the most consist of asking for protection for leaders
who have been threatened; the others have to do with the illegal actions of the mining industry on our lands, which are required to obtain prior consent.

Nowadays, as the urban centers have entered our territories, we are fighting to have the sacred places recognized and respected by the departmental authorities. There are 36 rivers that are born from the Sierra Nevada and that run through the entire resguardo and all the ancestral territory. Hydroelectric dams affect us. We are saying a resounding ‘NO’ to the companies within our ancestral territory. The ancestral territories should not be for mining or for quarries, and yet the companies do not make prior consultations and violate the fundamental rights of Indigenous Peoples.

Climate change affects us all around the world. We see it here. The Sierra Nevada has four thermal levels; the products we grow are divided by climatic zones. In the lower area there are sugarcane, plantain, cassava, beans, corn, avocado, cocoa, and coffee. In the middle area we also have coffee, cocoa, cane, beans, and guandu. The top is all that has to do with vegetables, potatoes, chives, and herding some small sheep. The crops are greatly affected, they rot. Today, yucca, bananas, and corn are growing where they were not before, the trees are dying, and other trees that are of the tropical climate are being born.

If these changes affect the highlands, the lowlands are also affected with the decrease in the river levels. The Mamos say we have to continue planting trees that are consistent with the environment. This is how we challenge climate change, which greatly affects our crops. We see new diseases in our trees, plants that we know as medicinal plants are dying, other plants are being born that are different, new animals appear like the blackbird and finchefoy bird, and the old ones disappear.

The water levels decrease in rivers and the Sierra Nevada is thawing. Traditional knowledge is transmitted by Mamos. We have several lineages. One takes care of the blood, the red; another takes care of the white seeds; another is in charge of the yellowish fruits—this is the lineage that takes care of everything that occurs under the ground like the tubers. Each lineage is responsible for caring for their mission because they are a team that is aware of their respective missions. We have a temple where the Mamos learn for nine years. They learn ancestral knowledge to guarantee that this knowledge continues. The issue is we are a minority; nobody supports this cultural part and it is up to us to continue our efforts.

Traditional knowledge is not only that piece of cultural mystique or mythology, but it collects all the cultural heritage that has to do with languages, traditions, dress, ways of thinking, behaving towards the world, how it projects the future of the world. All that context is the central knowledge linked to the sacred, to the territory, to the rivers, or to the environment, because it is part of an integral whole, of what we call “ecosophy of life.”