Our Existence Is Dependent on Us Being Land Caretakers 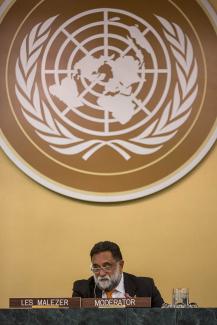 Traditional knowledge in relation to care for the country or management of the environment is definitely important and needs to be shared. There may be some things that are associated with ceremony that Indigenous Peoples may not want to transfer, but at the same time, being respected and part of the management of the biodiversity of the natural environment is a critical part of Indigenous Peoples’ identities and responsibilities. It’s very strongly felt in Australia where I come from. As Aboriginal people, we believe we are born from the land, we come from the land, we return to the land, our spirit is in the land. The land is alive, its spirit is alive. We don’t see a distinction between those things that are living and those things that are geographical features. They all have a spiritual representation and a role. Our existence as Aboriginal people is very much dependent upon us being able to manage a caretaker role.

That knowledge is very useful to the wider populations, the world, and good practice. In Australia, for example, our natural environment depends upon seasonal fires. Aboriginal people have used those seasonal fires and the plants have grown accordingly so that they can’t regenerate until the fire goes through. In other instances fire is needed to remove threats to the Indigenous environment—those sorts of practices are important. Another big one is water management. For the most part, rivers represent the path of what we call the Dreamtime Serpent; waterways are treated with great respect. In Australia, which is mostly arid country and very dependent upon seasonal rainfalls, there can be long drought periods of up to 10 years or more. Most areas receive a very small rainfall every year.

For that environment to survive, to stop desertification, there needs to be good practice in terms of the management and use of waters. This has been seriously affected since colonization by pastoral and agricultural industries irrigating. We are currently having a crisis in Australia caused by complete river systems drying up and fish dying in quantities of millions because traditional knowledge, Indigenous knowledge, has not been respected in relation to the handling of those waters. Waters are being treated in the model of economic development and not in relation to the health and well being of nature and Mother Earth. That knowledge is generally available, but it’s important to understand how that knowledge is imparted; it’s not just a case of being able to write it down and then pass it on. It comes with ceremonies that we do, it comes with social interactions. In our traditional way we would have gathered at certain seasons in certain places. That sort of knowledge is built into our lifestyle, not just something that we would present in a classroom or text.

These things are able to be shared, and I think the people want to share this knowledge and information, because the management and caretaking of the environment has been overtaken by the State in all its forms. Indigenous Peoples still hold responsibility for management, but need the state to work in cooperation and conjunction with them to deal with waters, to deal with fires, to deal with plantings, to control animal populations. The survival of native species is needed to maintain the hierarchy and range of species that we have in Australia. All of that knowledge, it’s in the interests both Indigenous Peoples and the State to get the value from that. In general, that knowledge has been ignored and overlooked, in the name of economic development, to exploit lands and waters and environment, rather than to build and protect those areas.

The Permanent Forum has been going for 18 years. During that time, delegations of Indigenous Peoples have been trying to pass on this message of how important it is that they be able to continue their cultural identity, to continue their traditional association with their territories, and maintain important practices. But of course, this has been a difficult message to get across to States and to get respect for it. As Permanent Forum members we are trying to build that relationship and trust that should exist between States and Indigenous Peoples. Particularly in this session, we’ve put a lot of effort into better communication, better mechanisms to resolve disputes and improve dialogues.

We’ve seen some change on this. We see that States are more prepared to accept that Indigenous Peoples should be in partnership, but there’s still not enough being done to make that happen. A big part of that, which shouldn’t be ignored, is that there needs to be a capacity for Indigenous Peoples. Because many of our communities are struggling for survival, facing poverty, facing poor health, poor accommodation, lack of food and subsistence, and even connection to country to continue the ceremonies that they need to do in order to continue to transmit their knowledge through the generations and across communities.

The challenge at the moment is to build capacity of the communities so that they can do the things that they would normally have done and want to do: to be caretakers, to continue their lifestyles and relationship with their territories. Particularly important are those communities that live in a subsistence way in the territories, relying upon resources of timber or fish or animals. That has been part of the survival of the biodiversity in the world. We know where Indigenous Peoples live is where most of the biodiversity exists. Indigenous Peoples are now being credited with having protected and saving those territories. And in the current discussions at the international level, credit is being given from people involved in climate change, people involved in the Convention on Biological Diversity, to the important role Indigenous Peoples have and the necessity for them to continue those roles.

Having 2019 as the International Year of Indigenous Peoples’ Languages has brought forth the significance of the transmission of knowledge in the languages. There’s been a lot written about Indigenous Peoples’ knowledge [in relation to language]. It’s important to keep languages alive in order to keep transmitting that knowledge, particularly from generation to generation. Also associated is how Indigenous Peoples are structured socially to deal with each other and with responsibilities. Language will provide a lot of structure for keeping communities together, harmonized, and able to distribute and carry out their responsibilities. I think we’ve seen some very good advances just in this year alone to recognize that traditional knowledge and the associated customary practices, laws, rules, and so on that Indigenous Peoples live by, are all part of that knowledge and its survival and transmission.