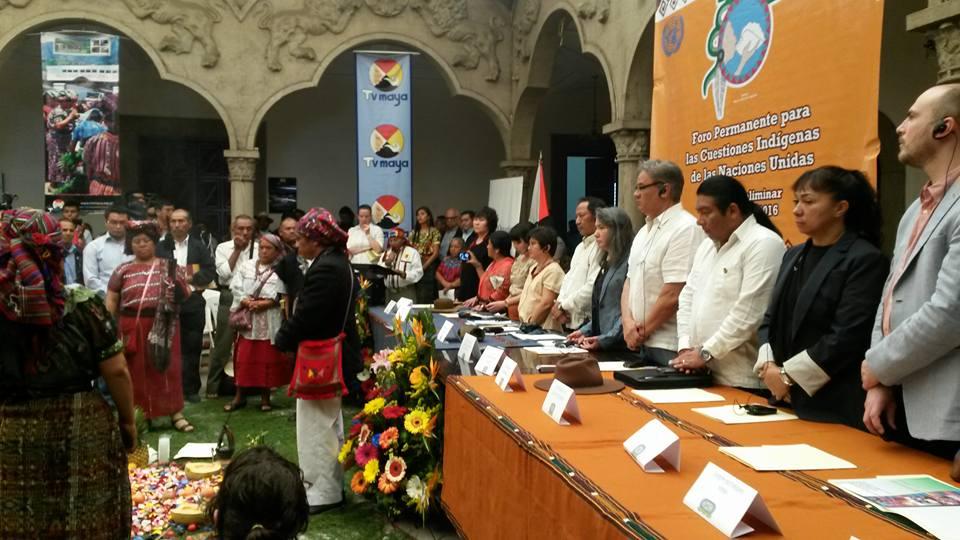 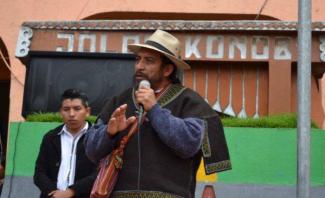 Rigoberto Juarez Mateo, a long-time Indigenous community activist from Santa Eulalia, Guatemala was arbitrarily arrested on March 24, 2015 in Guatemala City, while he was denouncing human rights violations against himself and his community. Rigoberto Juarez is a representative of the Pluri-national Government of the Q’anjob’al, Chuj, Akateka, Popti and Mestizo peoples, of Huehuetenango. Juarez, along with many other Indigenous leaders in Guatemala, are being systematically charged with arbitrary crimes and held in prison, removing them from their role as community leaders and organizers  who support communities in activism  defending their natural resources and ancestral claims to land.

At the time of the Juarez’s 2015 arrest by agents of the National Civil Police, an arrest warrant was not shown.  During the arrest, the police assaulted the Mayan lawyer Ricardo Cajas when he asked police to identify themselves and show an arrest warrant.  Later he was charged with a dozen crimes, ranging from conspiracy to kidnapping, none of which have any basis in factual evidence.  Meanwhile, Juarez’s trial dates continue to be delayed and authorities continue to release him on bail.

Members of the Q’anjobal Maya community in the northern region of Huehuetenango have been repeatedly harassed in recent years military, national police, private security of  transnational companies, and often hired thugs or hitmen.  These threats and acts of violence come in direct response for their activism to ensure community’s right to give or more often, withhold consent for the exploitation natural resources in their communities.

In 2012, Andres Francisco Miguel, was shot by security guards of the company Hydro Santa Cruz, in Santa Cruz Barillas, Huehuetenango.  In 2013, teacher Daniel Pedro Mateo, was kidnapped while on his way to a community meeting training environmental defenders in 2013, and found later with signs of torture. In 2015 17 year-old Pascual Basilio, was shot after attending a peaceful meeting between community members and those in support of another hydroelectric project in Q’anjobal territory, Proyecto Hidrico de Desarollo in Santa Eulalia, Huehuetenango. He died later of his wounds.

“The state of Guatemala has allied itself with companies to use the justice system to persecute and criminalize our leaders and Indigenous authorities who defend our lands, our human rights, and our rights as Indigenous Peoples… Just in the case of the Q’anjob’al peope in the last 4 years  six of our leaders have been assassinated, 41 have been wounded, 63 currently have warrants for arrest, 31 have been jailed, and  7 currently remain unjustly imprisoned,” he declared.  “Companies involved in extractive industries on our lads have accused our brothers and sisters of various crimes, including terrorism, illicit association, kidnapping, conspiracy, and even murder. Our relationship to mother earth, as our space to develop our cosmovision, es fundamental to our being, it is where we develop our sense of identity, our history, our livelihoods, and yet our lands are not protected under the law.”.

After their week long visit came to a close on April 16, 2016, Members of the UN Permanent Forum responded by issuing a sobering list of recommendations to Guatemalan authorities:

“The Permanent Forum calls for the immediate release of the Indigenous leaders and activists presently incarcerated and to ensure their access to due process, justice as well as impartial defense.  This request is the only way to ensure the equal application of the rule of law.  All Indigenous individuals and peoples must have specific measures for their personal security and access to justice.”  The recommendations also highlight the stark inequality and racism between Indigenous Guatemalans and other members of society:

"During the meetings held this week, with stakeholders, we have observed that a root cause of many, if not most of the problems facing Guatemala’s Indigenous peoples, is the concentration of land ownership, especially fertile farmlands, in few hands. According to recent National Agricultural Census, Guatemala’s Gini coefficient for land distribution is 0.84. This condition has left Indigenous peoples excluded from effective access to their homelands and one of the key means of production of the country. According to a current World Bank country overview, Guatemala is one of the few countries in the region where despite a growing economy, poverty has increased in recent years, from 51 percent in 2006 to 59.3 percent in 2014. Most affected by this are Guatemala’s Indigenous peoples. This poverty trap generates critical consequences on their quality of life, such as, low life expectancy and an 80% malnutrition rate among Indigenous children, and limited access to quality education. Staggering differences in socio-economic indicators shown in Guatemala between indigenous and non-indigenous populations, including a 13-year gap in life expectancy, are difficult to understand in the 21 st century. While Indigenous peoples are denied their rights to lands, territories and resources, the private sector, namely the extractive industries, hydropower and agribusiness are provided easy access to these resources, leading to further marginalization,environmental, and health problems for Indigenous peoples," the report concludes.  Read the full text of the Forum member's recommendations, here.

Profile of an Indigenous Human Rights Defender as  Political Prisoner

Rigoberto Juarez is a long time Indigenous leader who has been active in community work for decades.  He has worked in the Commission for the Defense and Promotion of the Rights of the Maya People Wuqub’ N’oj, Asociacion Mujb’ab’l Yol, and member of the National Council on the Principles of the Indigenous Development Fund of Guatemala, as well as on the board of directiors for the Academy of Mayan Languages of Guatemala.  In 1999 Rigoberto Juarez co-founded community radio station Snuq’ Jolom Konob in his hometown of Santa Eulalia, alongside Domingo Baltazar and Daniel Pedro Maya.  Of the handful of men who founded the radio station, 2 are imprisoned and 1 has been murdered.  The radio station has gone on to be a strong voice of the Q’anjob’al people doing investigative work on extractive industries on Indigenous lands in Northwestern Guatemala, despite being forced off the air for over a year due to threats from local officials, the station just reopened for broadcast on April 29, 2016.

In 2006 Juarez participated in the organization of a community consultation in which the Q’anjob’al Maya people expressed in absolute terms their profound opposition to mining and other extractive industries on their lands.

In 2013 Juarez, in his role as an ancestral authority of the Q’anjob’al nation, formed part of a commission that established a roundtable discussion with then Guatemalan President Otto Perez Molina and Minister of Government Mauricio Lopez Bonilla.  After a peaceful political revolution in Guatemala in the spring of 2015 that brought the resignation of Perez Molina from power, Both Perez Molina and Bonilla now face charges of corruption.

However, despite the removal of ex-military president Molina, the politically repressive atmosphere in the country he establshed has remained constant. Newcomer President Jimmy Morales has merged ideologically with the country’s  military elite- retired members of the same military who were instrumental in the planning and execution of brutality in Guatemala’s 36 year genocide that ended in the 1996 Peace Accords.

In a recent interview with Intercontinental Cry, Juarez’s lawyer Edgar de Leon, of the Mayan Lawyers Association, explained, “the old military tactic of decapitation is still being used byt he government. The only difference now is that they’re cutting down community organizing instead of community members.’’