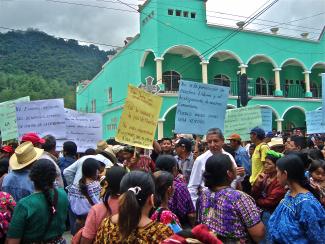 In the quiet forested valley of Santa Cruz Barillas, Huehuetenango, three men were walking home from the town’s annual fair alongside the bubbling Q’am B’alam River. The river, which means “Yellow Tiger” in the local Q’anjob’al Mayan language, has been at the center of conflict in the community since the Spanish company Hidralia Energia began prospecting the area in 2009 for the building of a dam.

On that evening of May 1, 2012, an incident occurred that would prove to be the last straw in a conflict that had been raising tensions for years. Two uniformed security personnel from Hidralia Energia appeared along the road. Without provocation, they fired shots at the three men, killing one and seriously injuring another before driving off in their company pick-up truck. The victims of the attack had been outspoken opponents of the installation of the dam in Santa Cruz Barillas.

Pablo Antonio Pablo, whose hand was nearly shot off, had refused to sell his riverside land to the company. He had been receiving threats since 2010, which he had reported to a local human rights ombudsman. Andres Francisco Miguel, the fatal victim, formerly held a position as a local elected official and was considered a leader by his peers.

Hundreds of people in Barillas mobilized in response to the attack. Their first action was to seek out those presumed responsible at a local hotel where Hidralia Energia employees were being housed. Finding it empty, they assumed that the energy employees were under the protection of local military and so stormed the military base, demanding an answer for the death of their leader. Astonishingly there were no further casualties that night.

By sunrise on May 2, 500 military and 350 national police equipped with army tanks and anti-riot gear had invaded the town. The newly elected president, former military general Otto Perez Molina, proclaimed the municipality an estado de sitio (state of siege), in effect declaring martial law and suspending all civil liberties.

Over the next several days, the military raided over 20 homes while seeking leaders for capture. Residents say that soldiers acquired a list of over 100 names of community leaders, many with photos and some with mobile numbers. It was clear that the government’s declaration of martial law was not a reaction to the death of Andres Fransisco Miguel, but to the events thathad followed. The military had intervened to protect the interests of the company, not the people.

There are conflicting narratives as to what happened on that night of May 1. Government officials blame the victims, claiming the shooting happened because the three men walking home were intoxicated. Government official Mauricio Lopez Bonilla explained that the estado de sitio was a response to the series of events that had made the situation “ungovernable,” adding, “This town has always been troublesome.”

President Molina justified the militarized state by suggesting that the conflict originated with gang members “interested in promoting drug-trafficking and organized crime, which explains why they are seeking the removal of military from the region.” On May 3 he announced that “We have identified 100 people involved [in the drug trade] that have attempted to protect the interests of drug trafficking and organized crime.”

Bonilla admitted that Hydro Santa Cruz, Hidralia Energia’s local subsidiary, had asked the government for increased military presence on various occasions, but indicated that the declaration of an estado de sitio had “no relation” to the dam. The company has denied any responsibility for the death of Andres Francisco Miguel, instead blaming the community leaders for “causing confusion.” The company’s public statement claims that all employed security forces were on
vacation at the time of the shooting.

No Right to Refuse
On June 23, 2007, the community of Barillas organized a referendum on which citizens voted unequivocally to reject transnational projects within their municipality. Despite the vote, Hidralia Energia arrived in Barillas in 2009 to explore prospects and subsequently initiated the Cambalam hydroelectric project. Community leaders in Barillas soon began organizing to protest the company’s plans.

Hidralia Energia responded to the people’s discontent by levying legal complaints against community leaders and local residents who refused to sell their land. In 2009, 10 community members residing along the banks of the river were charged with incitement of violence and defamation and were illegally detained. In turn, town officials held a meeting with community members and resolved to halt the construction of the dam. Immediately following this resolution, Hidralia Energia sought legal action against the town of Barillas.

The local judge ruled in favor of the company, enforcing the stance that the town has no right to refuse the construction of the dam. In June 2011, armed security forces appeared along the banks of the river —the same forces that would eventually take the life of Andres Miguel.

The guards prohibited the local residents from accessing the falls surrounding the river as well as their agricultural fields. Citizens filed complaints with authorities to no avail. Instead, 23 arrest warrants were issued for members of the community.

In January 2012, newly elected leaders of Barillas tried again to find asolution by entering into negotiations with Hidralia Energia. Despite their efforts, heavy machinery arrived at the site five days later.

The Earth Is Not an Asset
Huehuetenango is a department in northwest Guatemala that extends to the border of Mexico. Its forests are home to the highest numbers of native plant species anywhere in the country. Situated on the northern slope of the Cuchumatanes mountain range, it contains four watersheds, which comprise about
75 percent of the area and provide water for over 200,000 people. A UNESCO study marked the area of Barillas among the highest priority for conservation efforts within Guatemala.

The Q’am B’alam River, which flows along the outskirts of Barillas, has three sequential waterfalls. Members of the community (the Q’anjob’al Maya) use the river for washing, bathing, recreation, and as a sacred ceremonial site; the runoff water is used for irrigation of agricultural crops. The dam could have devastating effects on the waterfalls and surrounding environment.

Hydro Santa Cruz insists that the dam is a small project with a planned output of only five megawatts, but for the Q’anjob’al people, the significance is much greater: the Cambalam hydroelectric project represents yet another instance of a foreign company manipulating an Indigenous community and leaving conflict and destruction in its wake. A community group in Barillas declared: “The state of Guatemala continues to give concessions and licenses to foreign companies without taking into account the views and opinions of the local population that live in the area, violating Convention 169 of the ILO and the UN Declaration on the rights of Indigenous Peoples…the earth is not an asset to be sold, but is Mother Earth, and sustains the existence of all of those who inhabit her.”

Within Huehuetenango alone, at least 49 concessions have been granted to transnational companies for mining and hydroelectric projects. People have been horrified to witness the destruction in communities like San Miguel Ixtahuacán in neighboring San Marcos, where Guatemala’s first large-scale gold mine, the Canadian-run Marlin Mine, has ravaged the community and left disease in its wake.

To a community that is already suspicious of the transnational business model, construction of a dam poses another issue: according to the Q’anjob’al elders, the Q’am B’alam River was so named for the glints of light that could be seen in the surrounding waterfalls from gold deposits in the river. “Our grandmothers and grandfathers knew that there was gold in the river,” says Barillas resident Josepha Andres. “Today there exist three villages that surround the waterfalls, now called Recreos A, B, and C. It’s not a coincidence; these villages were created by our ancestors to protect this sacred site,” she explains.

The community is determined to protect the river, no matter what the costs—and the costs have been high. Twenty-three community leaders were detained in the three weeks that the community was under siege; another hundred who are believed to be on President Molina’s blacklist of accuseddrug traffickers fled to the mountains. A group of community leaders who prefer to remain anonymous out of fear for their safety explain: “Allies of the company are handing in lists of activists and the army is coming to take them away, just as the military did during the country’s civil war. They are invading public buses, demanding ID cards in the streets.”

The town of Barillas was hit hard during Guatemala’s 36-year civil war. Underneath the military base is rumored to be a mass grave where the bodies of victims of military violence were thrown; similar mass graves have been found elsewhere in the country. The generation that lived through those times sees this invasion as a continuation of the violence and repression that claimed many of their family members. The return to power of President Molina, a former general, means that the repression is now being led by the same individuals who were responsible decades earlier.

Raids were concentrated in the communities of Santa Rosa and Recreos A, B, and C, the towns surrounding the Q’am B’alam River. In an interview with Manuel Augusto Lopez Ambrosio, director of the military operation in Barillas, he affirmed that the siege was an opportunity to make arrests of “protagonists in previous conflicts” relating to protests against the dam.

The Fallout
On May 19, nearly three weeks after Miguel’s death, President Molina finally lifted martial law in Barillas. Military forces began to withdraw, but up to 150 military personnel remain in the town “to guarantee security and avert new disturbances.”

And there are other remnants of the siege: nine men from the community remain in detention in the national prison in Guatemala City. One of the detainees, Saul Méndez, had filed a complaint against Hydro Santa Cruz with a departmental ombudsman for making threats against him. Alberto Brunori, the UN high  commissioner for human rights in Guatemala, confirmed that he had been informed of the human rights violations and threats of violence prior to Méndez’s arrest.

Carlos Manuel Marroquin, a local lawyer, has taken on the case of the nine detainees. At a press conference in late June, he paged through a stack of papers. “In all of this information, there is not any legitimate investigation that implicates the nine accused men of crimes committed,” he said. What Marroquin has found are numerous human rights violations and disrespect for the legal process of detention. “We believe that this case is very grave for the state of Guatemala, because it demonstrates that when those arrested are Indigenous campesinos, their individual rights are not respected. The guarantees of rights are not applied to them . . . and that just cannot be allowed,” Marroquin said.

One month after the siege ended, on June 18, the community held a meeting in the town’s central plaza on the Mayan day of Oxlajuj Ix, a day believed to confer high levels of energy and wisdom. The meeting was a call for unity and solidarity among the community, Indigenous Peoples across Guatemala, and grassroots organizations around the world. Some supporters traveled for days to stand with the community that afternoon.

An inter-denominational prayer was offered for the well being of those currently under arrest, as well as for those who are still being persecuted for protesting the energy companies. Sixteen years after the end of armed conflict, dozens of community leaders again find themselves forced to flee their homes for asylum in the surrounding mountains, or even Mexico.

In an editorial published by one of Guatemala’s major newspapers, Juan Luis Font concluded with a petition of justice for those arrested: “The constitution states that the State should be organized for the primordial purpose of defending human life. The defense of private property comes second. It’s not the other way around.” While the people of Barillas continue the struggle to assert their rights, Hermalinda Simon, president of a local organization for women and children, implores the community to have faith: “To the wives of those who are being persecuted: do not despair. We will make sure that your husbands return home as soon as possible.”