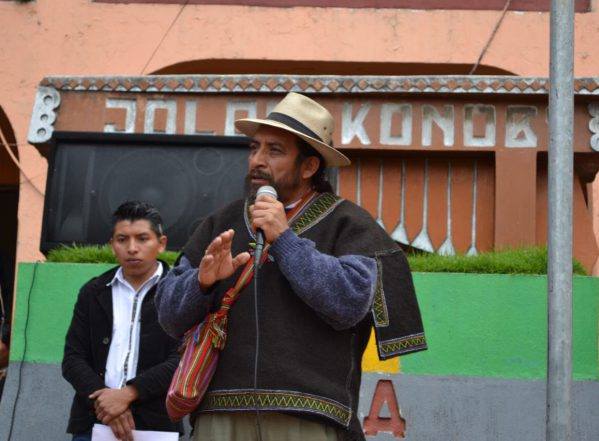 Rigoberto Juarez Mateo, a long-time Indigenous community activist from Santa Eulalia, Guatemala was arbitrarily arrested on March 24, 2015 in Guatemala City, where he was denouncing human rights violations against himself and his community. Rigoberto Juarez is a representative of the Pluri-national Government of the Q’anjob’al, Chuj, Akateka, Popti and Mestizo peoples, of Huehuetenango. Juarez is criminalized, along with many others who have been active in defending the natural resources of their communities.

At the time of the arrest by agents of the National Civil Police, an arrest warrant was not shown. Along with Juarez, Domingo Baltazar was also arrested, both whom are members of the traditional authorities of Santa Eulalia, Huehuetenango. During the arrest, the police assaulted the Mayan lawyer Ricardo Cajas when he asked police to identify themselves and show an arrest warrant.

Members of the Q’anjobal Maya community in the northern region of Huehuetenango have been repeatedly harassed in recent years by a transnational company  looking to exploit natural resources without the free, prior and informed consent of local communities.

Juarez and Baltazar had traveled to the capital, Guatemala City, to denounce human rights violations committed against community leaders and radio journalists on March 19, during a public event for the re-opening of the community radio station Snuq’ Jolom Konob.  Santa Eulalia's local mayor, Diego Marcos Pedro, has aggressively opposed the radio station and it's coverage of environmental protests regarding plans for hydroelectric and logging concessions. In January, a confrontation between the mayor, his supporters and community groups resulted in the death of 20-year old Basilio Pascual and another wounded.  Juarez and other community leaders have received multiple death threats.

Juarez’s arrest adds to the list of now 15 Q’anjobal Maya activists from Huehuetenango who have been arrested without evidence since 2012.  These arrests form a pattern exposing a strategy by the government and businesses to disrupt communities’ peaceful and organized opposition of the people against transnational companies and the destruction of the environment.

Cultural Survival stands with the Q’anjobal community in demanding the release of Juarez and Baltazar.  The continued arbitrary arrests of community leaders is deplorable and a grave violation of the UN Declaration on the Rights of Indigenous Peoples, the UN Declaration on Human Rights Defenders, Convention 169 of the International Labor Organization, and numerous other documents that establish Indigenous Peoples' rights to their lands, the right to defend their land, right to self-determination, and the right to peacefully assembly.