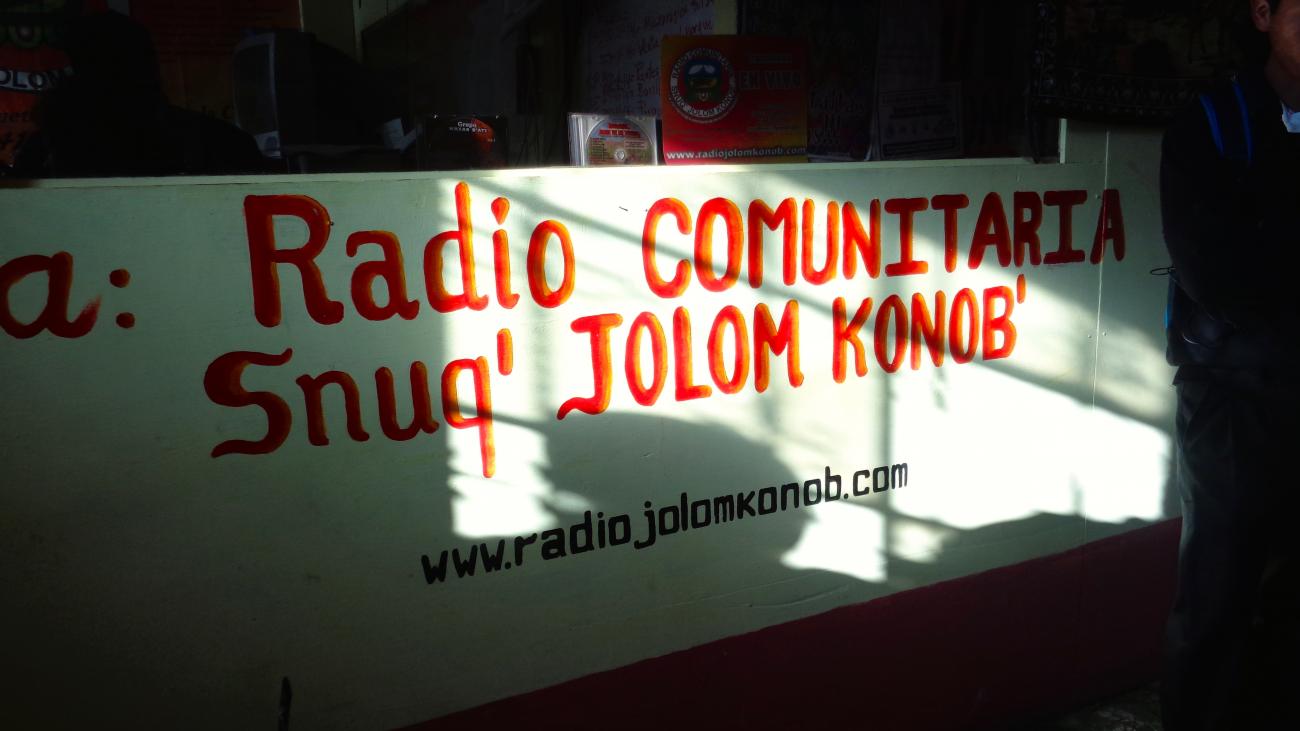 On January 20, 2015, the town of Santa Eulalia Huehuetenango, Guatemala became the center of an unfortunate and too common violent sequence of events against community journalists. The local community radio station was reporting about the national police terrorizing local residents during their search for “agitators.” The local authorities responded by shutting  down the radio station while the town’s mayor fired a gun at citizens, including volunteers who work at the station.  Guatemalan community radio stations are frequently targeted in police raids.

Over the past few months, the residents of of Santa Eulalia had been the protesting against a hydroelectric company, Proyectos de Desarrollo Hídrico (PDH) which was developing plans for a dam on Q’anjobal Maya traditional lands. The situation escalated quickly early on the morning of January 20, as the townspeople got word that almost 400 agents of the National Police were approaching the town with tear gas bombs and firearms. As the police entered town, they began raiding homes, accompanied by workers from the hydroelectric company who were identifying  community leaders that were involved in the protests against the company, including local community radio station operators of Radio Snuq Jolom Konob.

Adorned for its recent 15 years anniversary celebration the antenna of Radio Snuq Jolom Knob can be seen from several places in the community of Santa Eulalia.

As the police arrived in Santa Eulalia, they began firing tear gas into several homes, harming women and children.  The police arrested bothers Jesus Mateo and Casimiro Mateo. Casimiro is a community leader and member of an opposition group to the proposed hydroelectric dam. They were both taken at about 9:40am on a plane towards the city of Huehuetenango to be incarcerated. Both brothers had been involved in a confrontation on November 23, 2014 with PDH workers, for which they were being charged with attempted murder, claims that community leaders denounce.

Given these acts of repression and criminalization against the population by the State of Guatemala and evidently in favor of the mining and hydroelectric companies, as of 3:00 pm on that same Monday there was a meeting with the Coordinating Unit of the Center for Justice Administration in Santa Eulalia at the request of the representatives of the social movement. The meeting lasted until early Tuesday morning until the community felt that their demands were being met. As community members were heading home after hours of peaceful negotiation to have the Mateo brothers released on bail, the mayor of Santa Eulalia Diego Marcos Pedro, along with a gang of 16 others, fired shots at the group.  Two community members were wounded, Basilio Pascual Pascual Diego (age 17) and Armando Mateo Pascual (age 38). The mayor and his gang then moved to the premises of Radio Snuq Jolom Konob, which, by this time at 5:00 AM, was just about to start it’s morning broadcast. Radio Snuq Jolom Konob, located within the town hall building,  and has been a vital source of information for the town of Santa Eulalia and surrounding rural communities for over ten years. The radio had been broadcasting all events and covering the protests against hydroelectric companies which had upset the mayor and his supporters.

At around 5:00am Lorenzo Mateo Francisco, the station manager, arrived with a coworker and were confronted by the a crowd. “As  I approached the cabin, the crowd grabbed me, pushed me, and stopped me from entering,” said Francisco.  They told him that enough is enough, the information the station is reporting on the radio goes against the mayor and his work. “I was shocked and didn’t know how to respond,” said Francisco.

The crowd cut the power to the station and also trapped two youth volunteers Maria Victoria and David Diego Marcos, who were both heavily beaten and threatened. Radio Snuq Jolom Konob remains closed and all station volunteers have been denied access to the premises. “We need the intervention of organizations and authorities that protect human rights in order to get this information out. It is obvious that our authorities won’t do anything to protect us,” stated Francisco. “We ask all of those that support us to help keep us safe, because many of our friends and coworkers are traumatized and scared. Five people were beaten pretty badly and we don’t know what will happen to us,” he added.

Radio founder and defendor Lorenzo Francisco speaks out against the violations made by the government of Guatemala to his indigenous community and community radio Snuq Jolom Konob.

Radio Snuq Jolom Konob faced problems in the past with the mayor. In September 2014, the mayor cut power to and closed down the station facility to stop a broadcast covering an event of Indigenous community leaders in Santa Eulalia. Under pressure from the surrounding communities, the mayor reinstalled the station and an official complaint was filed to the Office for the Prosecution of Crimes Against Journalists in the Public Ministry. However, no further action was taken.

Members of the community radio movement in Guatemala and human rights defenders are concerned that this violation of the freedom of expression will go unnoticed and create an even tougher human rights situation in Guatemala. “At this time, unity is necessary, we can not allow the right of freedom of expression to be violated," said Ileana Alamilla of the independent media group CERIGUA. Cesar Gomez, of Sobrevivencia Cultural, explained that other community radio stations cannot be deterred from their important work, “This is another situation where as a media community we must make a decision to be at risk and continue to speak out. Radio Snuq Jolom Konob has served its community for over 15 years! This is a clear violation to our rights as Indigenous People.”

Guatemalan government authorities, the judicial bodies, and the human rights lawyers are being called upon to immediately begin investigations and criminal prosecutions into this case. Anselmo Xunic, legal representative of the association Sobrevivencia Cultural declared, “As an organization that aims to protect the rights of Indigenous Peoples and freedom of expression in Guatemala, we are shocked that the government continues to ignore us. We can only continue to petition the State and the international community to spread the word. Our authorities here aren't doing anything– we must now rely on our allies abroad to put pressure on the Guatemalan government.”

Show your support for  freedom of expression in Guatemala. Sign this petition (in Spanish) in solidarity with  Radio Snuq Jolom Konob! https://secure.avaaz.org/es/petition/Municipalidad_de_Santa_Eulalia_Huehuetenango_Guatemala_Libertad_de_Expresion_a_Radio_Comunitara_Snuq_Jolom_Konob/?lcvkUgb&pv=0 Or help us by donating to Cultural Survvial here!