After the COP21: How Bangladesh Can Move Past Coal and Why Rich Countries Must Help 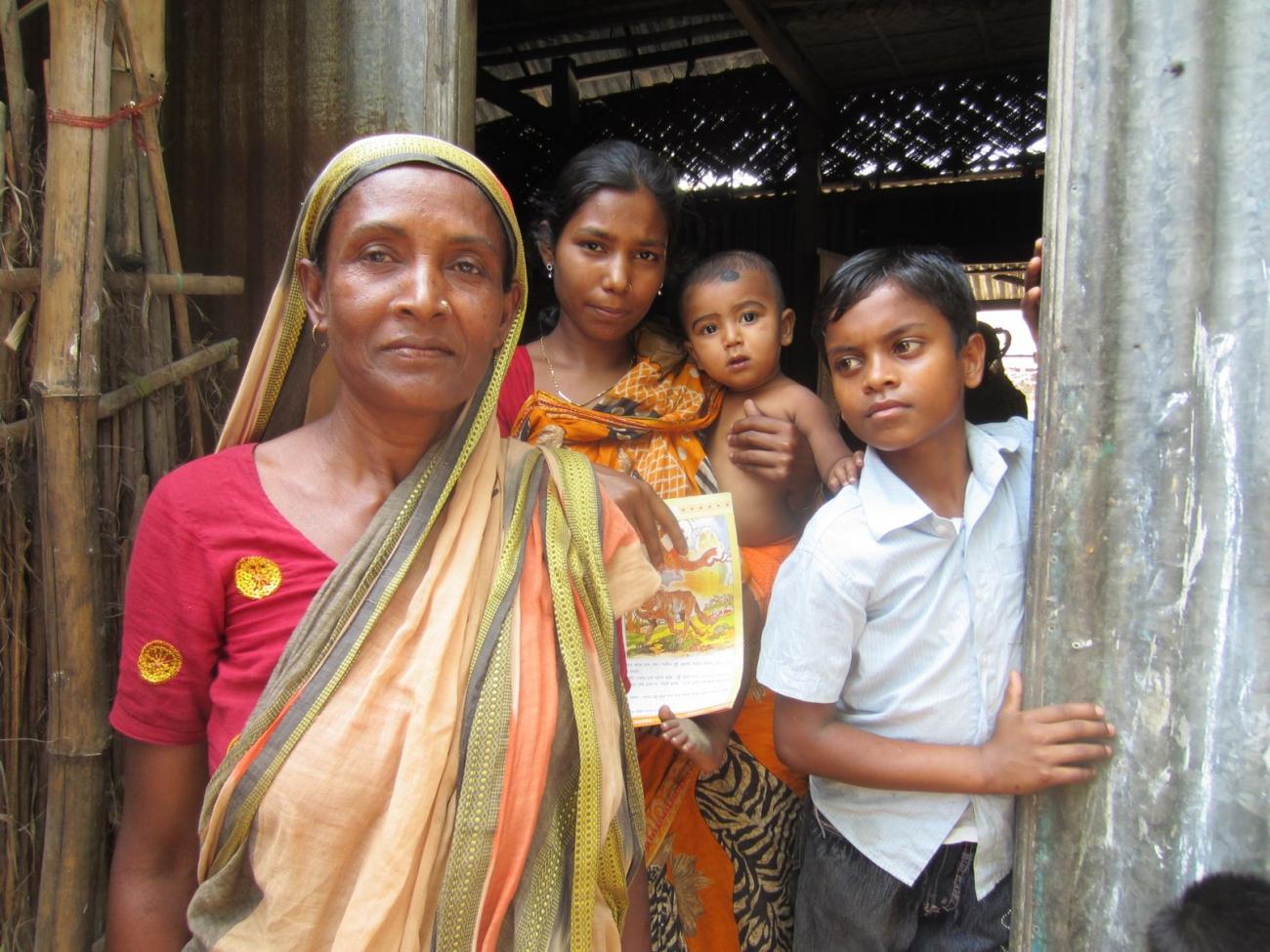 Community members in Manikganj, Bangladesh, struggling with River Bank Erosion and Flooding due to Climate Change. Photo by One World UK.
December 2015– The COP 21 brought 195 countries to the table to commit to decreasing their carbon emissions to keep global temperature rises at a maximum of 2 degrees Celsius above pre-industrial levels. It is novel in that where the Kyoto Protocol only required certain countries to cut emissions, the Paris Agreement brings everyone to the table, requiring both developed and developing countries to take action, albeit recognizing their differing situations and circumstances.  The question on the table now that the goal has been set is, how to we get there, and who will pay for it?

We know that the richest 10 per cent in the world produce half of the world’s carbon emissions, while half of the poorest are responsible for just 10 percent of emissions.

Two weeks of sticky negotiations in Paris had much to do with this question: to what extent will the richest countries cover the financial burden for the scores of poorer nations who are experiencing the effects of climate change, but lack almost any of the historical responsibility for creating this mess, as well as the capital needed to fix it?

Furthermore, if limits are set on developing countries’ emissions, who will cover the costs of leapfrogging over existing inefficiencies in energy production, towards renewable energies?

Each country has now submitted its own nationally determined climate action plan, called an INDC. Yet a report released last month by the Civil Society Review analyzing each country's INDC has found that the ambitions of major developed countries fall well short of their fair shares.  For example, the United States and the European Union’s pledges, which include not only domestic action but also international finance, address only about one fifth of their ‘fair share’ that they were responsible for creating. Rich countries have the potential to do much more, as small adjustments to rich countries’ pledges can have major implications in reducing carbon emissions globally, but are lacking the political will. This is climate injustice.

Meanwhile on average poor countries are anteing up at least as much as they are responsible for, if not more. Bangladesh, for example, carries responsibility for less than 0.35% of global emissions. Bangaldesh’s INDC may be promising to cover enough of its fair share to cover it’s responsibility, but the nation’s energy policy over the next 5 years is still heavily dependent on coal, rather than renewables. Less developed countries have a major opportunity to skip past some of these least efficient forms of energy production, just like many countries in Africa did when they skipped telephone land lines and headed straight to mobile networks.

In fact, doing so is imperative: an analysis by the Climate Action Tracker presented at the COP 21 found that attempts to keep global warming to 2 degrees will be wildly off course if existing plans for coal-fire plants are carried out, as coal is the world’s single biggest contributor to global warming. Just by allowing the 2,440 coal-fired power stations that are currently planned would cause emissions rates four times higher than the 2-degree target by 2030.  Without a single new coal plant, allowing existing coal plants to continue operating would lead to emissions rates 150 percent higher than what is consistent with a 2-degree target.

But Bangladesh, like India and other nations making up the Group of 77 coalition of developing nations (G77), argue that their citizens cannot be expected to forego access to basic services like electricity in their homes.  In 2012 more than 20 percent of the Indian population lacked access to electricity. In Bangladesh that number is 40 percent.

Harjeet Singh, a New Delhi–based ‎international climate policy manager for ActionAid, explained that India doesn’t want to have to expand coal, but cannot currently afford renewables. “Coal is not an obsession for India, it's a compulsion," he said at the COP 21.  Despite being on board with emissions reductions globally, India has plans to double its own coal production in the next five years, and Bangladesh is also hoping to increase its coal production by 2030.

One of the coal projects that has been promoted by the Bangladesh government is the Phulbari Coal Mine, designed as a massive open-pit coal mine to extract 572 million tons of coal in Northwest Bangladesh.  But the mine is a devil’s deal: if implemented, it would destroy over 14,660 acres of fertile agricultural land that produce three food crops annually, trading electricity needs for increased hunger in a country in which nearly half of all people currently live below the nutrition poverty line. Seven UN human rights experts have called for an immediate halt to the project, on the grounds that it threatens the fundamental human rights of hundreds of thousands of people, including entire villages of Indigenous Peoples, and poses "an immediate threat to safety and standards of living." Still, parent company GCM Resources in London is aggressively moving forward on its plans implement the project despite massive local and international protest.

The Government of Bangladesh has lately shown hesitancy in granting approval to the project, but in its INDC, includes continued coal extraction as an objective in mitigating carbon emissions.

G77 countries have argued that their countries can only cut back on the energy sector if money is made available from rich counties to boost renewable energy development. At the COP 21, “[A]sked whether India would cut back on coal if the Paris agreement ensures it receives international support that brings down the cost of expanding renewable energy, Ajay Mathur, the director of India's Bureau of Energy Efficiency, told AP reporters, : "Absolutely…Solar and wind is our first commitment. Hydro, nuclear, all of these non-carbon sources are what we will develop to the largest extent we can," he said. "What cannot be met by these would be met by coal."

In 2009, developed nations set a goal to contribute $100 billion per year by 2020 to finance climate change mitigation and adaption. Adaptation would include investments in renewable energies like solar to help leapfrog countries like Bangladesh past projects like the Phulbari Mine and towards alternatives. But in reality, these countries haven't come close to contributing that amount.

Bangladesh is one of the few countries that has benefitted in receiving some of that climate financing, through UNDP’s green climate initiative. But the majority of this funding goes to mitigation projects, rather than adaptation to new technologies.  With a highly exposed coastline, Bangladesh is already experiencing trauma due to rising sea levels and changing cyclone patterns. The World Bank, known for its more conservative estimates, released a study in 2013 noting that an expected rise of 2 degrees Celsius (now the targeted goal under the Paris Treaty) will make Bangladesh among the most affected countries in South Asia, threatening food production, livelihoods, infrastructure, and poverty levels.

If Bangladesh wants to keep its coal in the ground, which is urgently necessary in order to reach the already lofty goal of 2 degrees Celsius, while still bringing much needed electricity to many of its rural areas, it will need much stronger investment from developed nations.

Robert Watkins, UN Resident Coordinator in Bangladesh, called for this investment in an op-ed after the COP 21. “Now is the time for markets to invest in the low-emission economy and to move away from fossil fuels in order to minimise the loss and damage from climate change. The Paris Agreement represents a unique opportunity for Bangladesh and the rest of the world to move towards a global transformation that will help to safeguard our planet for generations to come.”

So, in the end the question lies with taxpayers in rich developed nations like the US and the EU. Will we pony up and vote to fund climate change adaptation technologies that will help clean up the mess we created for developing nations?  Or will we continue to force the world’s poor to shoulder our burden?