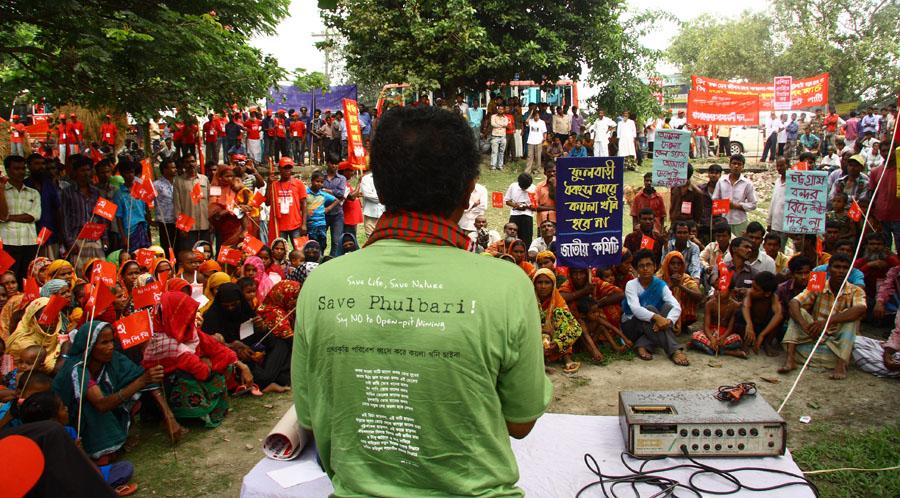 London-based multinational company, GCM Resources Plc, is desperately moving to implement an immense open pit coal mine in northwest Bangladesh, forcibly displacing an estimated 130,000 people and destroying the homes, lands, and water sources of as many as 220,000 people.  On November 26, 2014, the company’s CEO, Gary Lye, attempted to conduct consultation with locals in Phulbari and was met with angry crowds.  “He had to leave the town in two hours. Locals have attacked his car and ransacked his office,” related Anu Muhammad, Member Secretary of Bangladesh National Committee.  “The whole self of Phulbari is fighting for their land, homes and lives. People of all classes including farmers, business entrepreneurs, rikshaw-pullers, teachers and house wives have taken to the street… The Mayor of the Phulbari Borough, the Chairman of Phulbari Upazilla and the Business Entrepreneurs have all come to consensus that they will fight against GCM’s proposed project… [this] suggests that Asia Energy’s [GCM’s local subsidiary] day has ended in true terms. Phulbari has embraced to resist open pit mine,” he continued.   Activist groups in London are planning a solidarity protest on December 9th.

If the open pit coal mine is implemented, it will destroy over 14,660 acres of fertile agricultural land that produce three food crops annually, threatening to increase hunger in a country in which nearly half of all people currently live below the nutrition poverty line. Locals have protested the project for seven years by forming powerful human chains and rallies. In August ofBang 2006, three people were killed and over 200 injured when paramilitary troops fired on a massive protest of some 80,000 demonstrators in Phulbari.

Seven UN human rights experts have called for an immediate halt to the project, on the grounds that it threatens the fundamental human rights of hundreds of thousands of people, including entire villages of indigenous people, and poses "an immediate threat to safety and standards of living." Still, GCM is aggressively moving on to implement this open pit coal mine ignoring the human rights and environmental degradation the project would leave.

Scientists have determined that extracting and burning the world’s remaining coal reserves would tip the scales towards irreversible climate change.  Coal is the world’s single biggest contributor to global warming. Whereas most of the developed world has abandoned coal, governments in poorer countries like India and Bangladesh are trying to squeeze out what they can out of the natural resources, despite damning effects on air contamination that have already made their cities among the most polluted and unlivable in the world: Delhi’s air is already three times more toxic than Beijing’s; Dhaka city’s air was measured to have the highest density of lead in the world.  Despite this, and the fact that many countries are announcing policies to reduce future emissions at the COP20 UN Climate Conference in Lima this week, India is unveiling a plan to double its own coal production in the next five years.  Bangladesh is also hoping to increase its coal production by 2030.

Phulbari Solidarity Group, an activist organization, founded by eye-witnesses to the 2006 killings, is hosting a demonstration outside the company’s London headquarters at their annual shareholders meeting on Tuesday, December 9th. The group is calling for the company to be de-listed from the London Alternative Investors Market, a move supported by a number of British MPs and financiers including the Barclays.

If the open pit coal mine in Phulbari were to move forward, it's not just bad news for Indigenouos peoples, local businesses, and Bangaldesh; it's bad news for the entire planet.

Please join us at the demonstration at 10:30 am on Tuesday, December 9th at 4 Hamilton Place, London, W1J 7BQ. Download the flyer here.

If you can’t make it to the protests in London, follow @Phulbari_News on Twitter and help spread the word .