“Annexed:” The Rights of Indigenous Peoples in the UN Climate Change Conference 2015 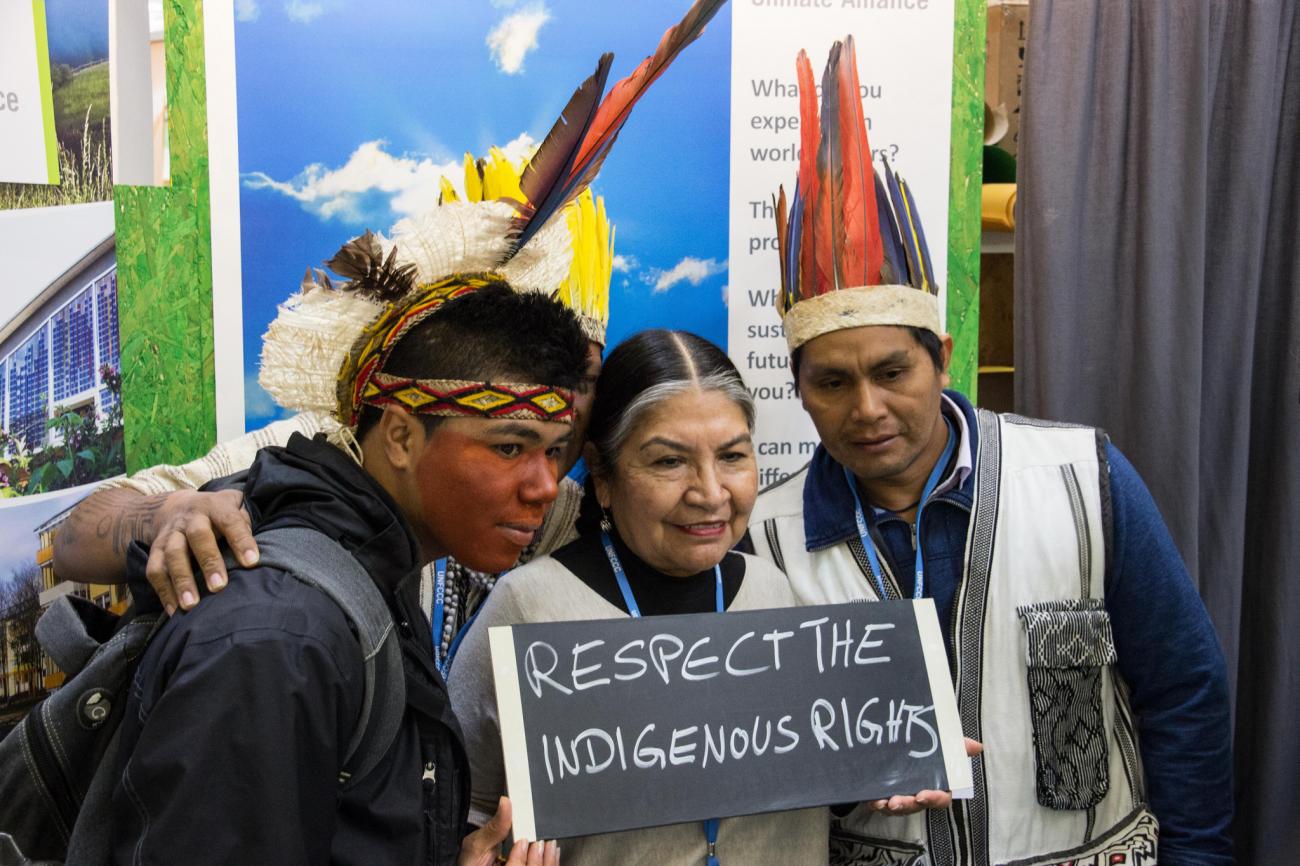 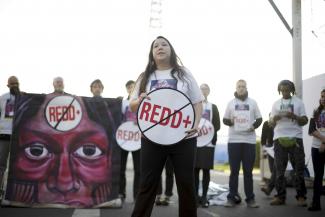 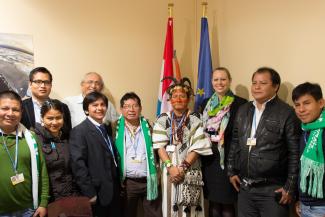 On December 12, 2015, after two decades of climate talks within the UN Framework on Climate Change (UNFCCC), world leaders from 195 countries in Paris came to a consensus on a legally binding agreement on climate change, with the aim of keeping global warming below 2°C and reducing carbon emissions across the globe. The two-week long Conference of Parties (COP 21) process also brought together some of the world’s largest corporations, environmental and human rights organizations, and grassroots activists to hash out international energy goals, standards, and implementation. Over 250 Indigenous delegates were present and advocated for the inclusion of Indigenous rights in the Paris Agreement.

Earlier drafts of the agreement included the protection of Indigenous rights in Article 2.2. But in the second week, this reference was annexed from the operative text – the part of the text that is legally binding – under direction from the European Union, Norway, and the United States. The European Union and the US have been poised as two key players in the fight against climate change – but their lack of support for Indigenous rights will leave Article 2.2, and consequently, Indigenous Peoples, without binding legal or political clout. References to the protection of Indigenous rights was finally included in the preamble to the text, which crafts the framework for interpreting and implementing the operative section.

UN Special Rapporteur on the Rights of Indigenous Peoples, Victoria Tauli-Corpuz wrote, “The references to human rights and Indigenous Peoples rights are found in the Preamble of the Decision and of the Paris Agreement...I think these paragraphs will be very useful for Indigenous peoples. The reference to human rights is still rather weak, with the use of the phrase ‘...consider their respective obligations on human rights...the rights of indigenous peoples..’ The verb which should have been used is to fulfill or to comply with their human rights obligations. Anyhow, it is still a given that since most governments ratified the International Human Rights Conventions, they must comply with their obligations to respect, protect and fulfill these.”

Semantics in the text point to further watering down of Indigenous rights. For example, any obligations following the verb “shall” are legally binding, however those following “should” are not. “The final agreement says in the preamble that states ‘should’ respect, promote and consider these rights among others in carrying out climate related activities,” said International Indian Treaty Council Executive Director Andrea Carmen. However, Carmen pointed out that this is the first time that the rights of Indigenous Peoples have ever been included unqualified in a legally binding UN treaty.

Indigenous protesters demonstrated their disapproval of the exclusion of their rights from the document by organizing in a kayak flotilla on the Bassette de Villete in Paris on December 6.  This peaceful protest garnered widespread attention from the public, the press, and social media with the hashtag  #canoe2paris. In addition, the Indigenous Peoples Forum on Climate Change (IPFCC) requested that “respect for human rights, including the rights of Indigenous Peoples in climate change policies and actions,” be included in the legally binding operative part of the text as well as the preamble.

One of the world leaders who surprised the world by fighting for the inclusion of this amendment in the operative section was newly elected Justin Trudeau, Prime Minister of Canada. He stated on November 30 in Paris,“Indigenous peoples have known for thousands of years how to care for our planet. The rest of us have a lot to learn and no time to waste.”  In British Columbia, Canada, climate change has already proven disastrous for Indigenous groups. The devastation caused by the mountain pine beetle threatens the migrating salmon as water temperature rises, and many Indigenous groups living on islands in the Pacific Northwest will be at risk for losing their ancestral lands.

Indeed, Indigenous Peoples across the globe are those on the frontlines of the humanitarian disasters caused by climate change. Rising ocean levels, droughts, flooding, and deforestation are most damning to the communities who rely on the earth for their daily survival.  At the same time, Indigenous Peoples are doing the most to protect the precious forests and natural resources that do still exist.

A study presented at COP 21’s Global landscapes forum showed that Indigenous People oversee around a fifth of the world’s carbon stock, in the form of tropical forests. Altogether, 168 billion tonnes of carbon are stored on Indigenous lands — around three times the world’s annual emissions — and this is in danger of being released if the societies looking after these lands are not strengthened, the study found. Currently, only 18% of Indigenous lands are titled and acknowledged by States.  UNDP Administrator Helen Clark reflected in her opening remarks to the 2015 Equator Prize ceremony at the COP, “When Indigenous Peoples and local communities don’t have secure land rights, or their rights are weak, their forests become more vulnerable to deforestation. That in turn worsens the climate change challenge, and impacts badly on livelihoods and human well-being. But when communities’ rights are legally recognized and protected, then deforestation rates are lower and our forests can play their vital roles.”

The COP 21 brought together over 250 Indigenous leaders from all corners of the planet, yet many of them were excluded from official negotiations. Chief Bill Erasmus, 28-year elected leader of the Dene Nation voices his frustration: “We have our own land, our own language, and our organizations and laws. We meet the criteria of a nation. We are a nation. Why are we not in that [negotiation] room?” Considering the challenges that climate change presents to Indigenous Peoples and the land and water-based responses required, Chief Erasmus’ argument strikes a chord. Though there are over 370 million people worldwide that identify as Indigenous, their leaders are widely excluded from decisions that affect them, and Indigenous communities are continuously refused their right of stewardship, as outlined in the UN Declaration of the Rights of Indigenous Peoples.

Eriel Deranger, member of the Athabasca Chipewyan First Nation, points out another reason why Indigenous leaders should be included in the talks: “At the moment the rights of Indigenous peoples all over the globe are being violated by ‘green climate projects’ – such as hydropower dams – in the name of ‘climate mitigation.’ If such violations are happening now, imagine what will come with a legally binding document where the rights of Indigenous peoples are not guaranteed.” The final result, says Deranger, is “… in the middle of the road. The rights of Indigenous Peoples were mentioned three times throughout the bulk of the decision document, and the Paris Accord itself.” However, the mention of protection of Indigenous Peoples’ rights was excluded from the operational text. Despite this frustrating omission, Deranger points out: “There is mention of the necessity of the inclusion of the knowledge of Indigenous Peoples in looking at adaptation measures, and interestingly, there is mention of climate justice and Mother Earth in the preamble. These are all really interesting language choices.” Deranger is positive about the role of Indigenous activists in the negotiation process. “This isn’t just about what happened inside of the negotiations on COP21, but all those people that stood on the streets en masse today in Paris and across the world demanding things like climate justice, demanding the respect for Mother Earth, and demanding that the rights of Indigenous peoples be included in the document.” Deranger notes that, “While this accord is just one step, we have a lot of work to do. We must continue the push, we must make these governments accountable, we must hold them to the fire and move forward.”

Preambular Paragraph 8 (PP8) in page 1, states ‘Acknowledging that climate change is a common concern of humankind. Parties should, when taking action to address climate change, respect, promote and consider their respective obligations on human rights, the right to health, the rights of indigenous peoples, local communities, migrants, children, persons with disabilities and people in vulnerable situations and right to development, as well as gender equality, empowerment of women and intergenerations equity. "

PP 16 in page 2: states "Agreeing to uphold and promote regional and international cooperation in order to mobilize stronger and more ambitious climate action by all Parties and non-Party stakeholders, including civil society, the private sector, financial institutions, cities and other subnational authorities, local communities and indigenous peoples."

Page 19 V. Non-Party Stakeholders. Paragraph 136, "Recognizes the need to strengthen knowledge, technologies, practices and efforts of local communities and indigenous peoples related to addressing and responding to climate change, and establishes a platform for exchange of experiences and sharing of best practices on mitigation and adaptation in a holistic and integrated manner."

Page 20 PP 12, "Acknowledging that climate change is a common concern of humankind. Parties when taking action to address climate change, respect, promote and consider their respective obligations on human rights, the right to health, the rights of indigenous peoples, local communities, migrants, children, persons with disabilities and people in vulnerable situations and the right to development, as well as gender equality and empowerment of women and intergenerational equity."

page 24: Article 7: Para 5. "Parties acknowledge that adaptation action should follow a country driven, gender-responsive, participatory and fully transparent approach, taking into consideration vulnerable groups, communities and ecosystems, and should be based on and guided by the best available science and, as appropriate, traditional knowledge of indigenous peoples and local knowledge systems, with a view to integrating adaptation into relevant socio-economic policies and actions, where appropriate."