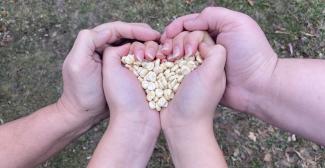 The Indigenizing Philanthropy series is a five-part article series accompanied with a webinar on December 15 and toolkit to provide a framework in how to transform and Indigenize philanthropy. Galina Angarova (Buryat) and Daisee Francour (Oneida/Haudenosaunee) have unique experiences as Indigenous women, having both worked in philanthropy as program officers for private foundations and as fundraisers for NGOs. They offer their dynamic expertise and shed an important light on how philanthropy can take a serious, introspective look at its colonial roots and take authentic actions to remedy its future in a way that is aligned with natural law and responsible ways of being and knowing. Philanthropy plays a significant role in the U.S. economy, accounting for several trillion dollars in assets and with annual giving rising each year, and even more across the globe. In 2019, Americans gave almost $450 billion. So, how do we harness the power of philanthropy to better serve Indigenous Peoples and communities of color?


In many Indigenous cultures, the world is viewed as female: Mother Earth, Pachamama, ohútsyaˀ, and others. In fact, some of the most powerful living things in our world are part of the sacred feminine, which plays a central part in the cosmovision of many Indigenous cultures and is expressed through our relations, stories, and ways of life. Many Indigenous worldviews hold that every being carries the qualities of both the sacred feminine and the sacred masculine, and cultivating these energies in a balanced way is our sacred mission. They also instruct us to recognize the convergence and different sacred expressions of these energies, including Two-Spirit, non-binary, queer, and others.


Colonization has twisted our collective worldview to view men, and the masculine energy, as the dominant powerful force, requiring the utmost respect. The sacred feminine has been degraded, neglected, harassed, attacked, and violated, and we are continually facing the consequences of this imbalance. Today, we live in a world where the masculine and the feminine are out of balance, and this imbalance has resulted in the worst injustices with respect to gender and racial inequality, hunger, poverty, and of course, environmental destruction and climate change. The equilibrium between the masculine and the feminine is the foundation of well-functioning societies and we need to restore this balance. Our planet, our soils, and our environment are the ultimate manifestation of the sacred feminine. We all come from her womb, the sacred feminine, and it is our duty to respect and protect it. Restoring the sacred feminine individually and collectively is essential to regaining balance in the world.


Many Indigenous communities, including ours in the Americas and Russia, come from matrilineal cultures where women are the backbone of our societies and economies. This did not take away from the power and divine importance of men and masculine energy in our societies; rather, it reinforced the equal role of all energies in this web of life. Indigenous Peoples instinctively know how to live in harmony and balance with our environments and each other, and that balance is reflected in our creation stories, original instructions, traditional knowledge, values, and cosmovisions. Indigenous prophecies like those from the Hopi and Māori say that women will regain their places as original healers and will lead the way into a higher consciousness. Terms like “feminism” and “equality” do not exist in Indigenous languages, as these concepts were already embedded in the cultures, relationships, and governance of Indigenous Peoples around the world.


The Haudenosaunee Confederacy deeply influenced the women’s suffrage movement, which has now transcended into feminism and women’s rights. Haudenosaunee women provided a model of freedom for EuroAmerican women who possessed few rights in early American history. Some of these rights included decisive political power, control of their bodies, control of their own property, custody of children, the power to initiate divorce, the right to satisfying work, and a society generally free of gender-based violence. Haudenosaunee culture reflects balance between the masculine and feminine energies through balanced decision making. The Great Law of Peace (the Haudenosaunee constitution) recognizes the power and influence of women and their unique roles and responsibilities, which serve as the foundation to Haudenosaunee governance and economies.


For the Buryat people, a matrilineal society, the sacred feminine plays a central part in their cosmovision. Angarova comes from generations of powerful women who were regarded as some of the best hunters and warriors; the spirit in them has survived through colonization and 70 years of communism. The same spirit that makes these women the guardians of their clan makes them original story tellers, caretakers, and nurturers. Buryat grandmothers are jewels of their multigenerational households and maintain balance inside the home, throughout their communities, and across the nation. The moments they spend with their  grandchildren are sacred, as this is when the sacred feminine is in full force, patiently weaving its way to pass traditional knowledge and language to younger generations.


How Rematriation Can Be Applied to Philanthropy

Rematriation is a process of going back to balanced relationships, to understanding and living our original instructions of protecting and honoring the sacred feminine, of honoring our grandmothers, mothers, and daughters, and trusting that they will make best decisions to benefit our families, communities, Mother Earth, and all human and non-human relatives for generations to come. Compared to repatriation, which is individualistic and gendered, implying that only the masculine energy is in control of returning and receiving, rematriation is an act of returning, or aligning with the collective under the stewardship and leadership of women. Shifting towards rematriation better reflects the natural laws of reciprocity and equality, given that the sacred feminine is what nourishes and sustains all living things.


As we know, modern philanthropy is deeply rooted in colonial systems of academia, finance, and banking. We need to mindfully unpack, self-reflect, and recognize its flaws in order to reimagine the future of philanthropy. A money-based economy has changed our relationships with one other and to Mother Earth, as scarcity is inherent to the concept of money, which in turn results in extractivism, hoarding of resources and power, and degradation of our ecosystems and our relationships. Shifting to the mindset of abundance, even within the existing system, restores the sacred feminine and rematriates the proposed remedies. Indigenous Peoples offer the insights and solutions to our modern day crisis, including philanthropy and the nonprofit industrial complex. We must question our assumptions, decolonize, and Indigenize ourselves and our workspaces.


To do this, we must first and foremost center, develop, and sustain Indigenous women, Two-Spirit, femme, and non-binary leadership in all forms of decision making because they are the most underrepresented groups in leadership positions across all sectors. Philanthropy, too, needs to embrace the leadership of Indigenous women and Two-Spirits, and foundations should seek to embrace and elevate Indigenous women’s leadership in their board and staff and in their grantee partner organizations. This means intentionally giving them a space to speak without fear, intimidation, or tokenization, to seek out their expert opinions and perspectives, and support them with adequate, self-determined resources and connections.


Indigenous women in our cultures have always been the sources of creation and redistribution. According to UNAC, women reinvest 90 percent of their incomes back into their families, compared to just 35 percent by men. When we invest in women’s rights, health, and well being, it creates a positive ripple effect that lifts up communities and entire countries. A woman multiplies the impact of an investment made in her future by extending benefits to the world around her. By creating a better life for her family, she builds stronger communities. Among foundations that support women’s issues, Indigenous women are often left out of their portfolios. Support for women’s rights and issues also means supporting Indigenous women and Indigenous rights. While human and women’s rights are about one individual, Indigenous rights are collective, communal rights.


To invest in Indigenous women’s leadership is an act of decolonization. Philanthropy has begun to embrace decolonization but lacks the vision and appropriate leadership to carry out those efforts. Indigenous women are the best leaders for this as we are original healers, and many of us carry our traditional ways of healing, ceremonies, and prayers. Healing is fundamental to decolonization and should be an institutional priority for philanthropy, not only reflected in a generous budget line item, but as a central value and principle for the organization. While philanthropy embraces learning as a priority, this should include healing and decolonization, with additional resources to support healing work for their grantee partners, too.


Indigenous women, femmes, Two-Spirit, queer, and nonbinary people bring a bountiful gift to the world, and our leadership, knowledge, and understanding of how to live in a reciprocal way with Mother Earth, among one another, and with our environment upholds both the spiritual and ecological integrity of the land and all living things. In most, if not all, Indigenous languages the world “philanthropy” does not exist. What does exist are our original instructions given to us from the Creator and our ancestors, which outline our values and principles and inform our actions and behavior. Our actions and solutions are deeply rooted in our worldviews, which are informed by our millennia-old relationship to the land. It is Indigenous women’s leadership’s implementation of our original instructions, values, and principles that will serve as a basis and a roadmap to make the profound and necessary change that philanthropy, and the world, needs and craves. 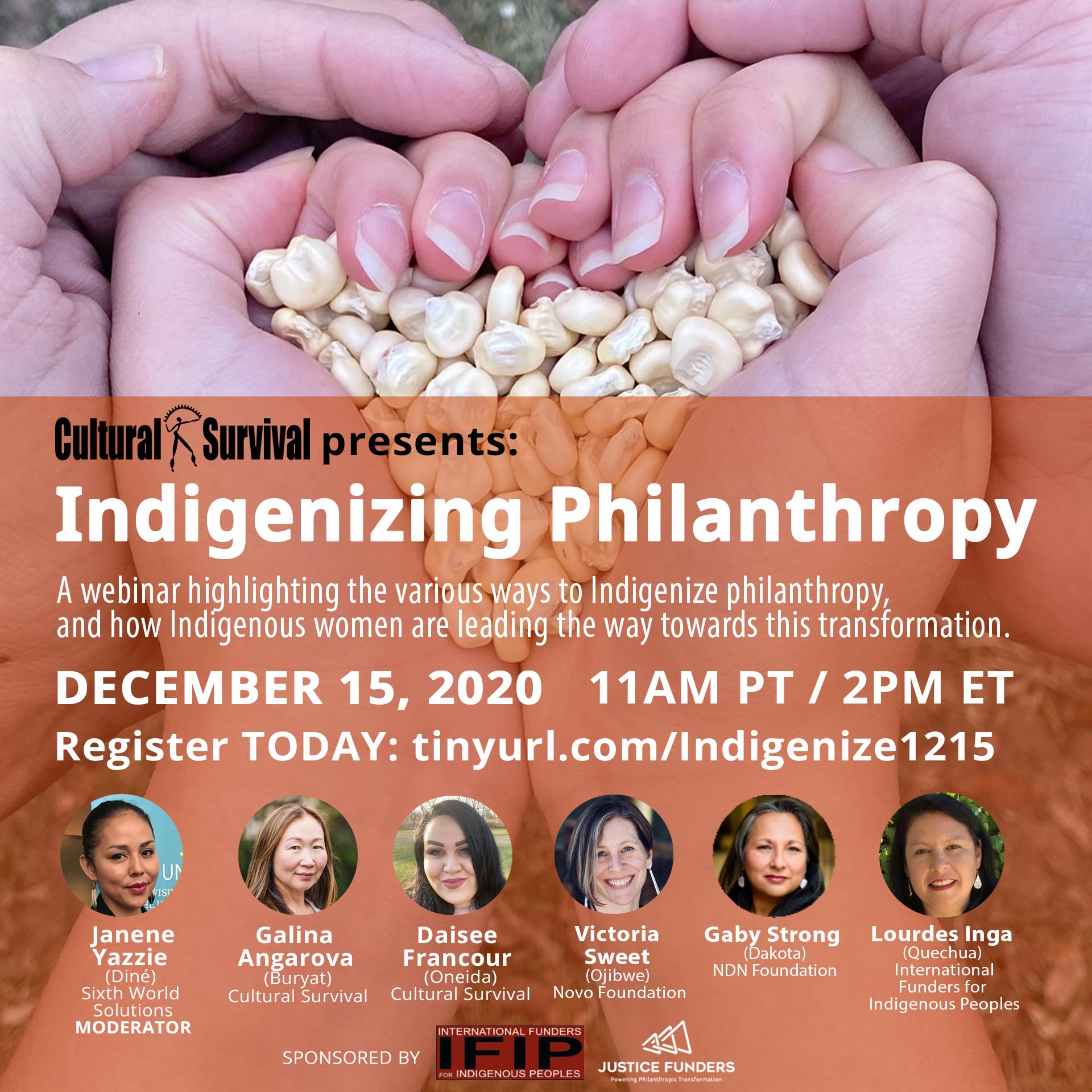 Like what you learned? Consider making a gift to sustain the work of Indigenous leadership and grassroots solutions today!