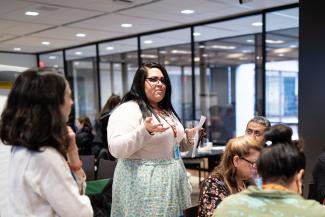 Shekoli swakwe·ku, Daisee ni yukyats. Ukweh·u·wé niʔí. Wakenyʌ́ htʌ niwakiʔtaló·tʌ. Hello, relatives, my name is Daisee Francour. I am a Haudenosaunee woman, a proud member of the Oneida Nation of Wisconsin and turtle clan. My journey to help transform and “Indigenize” philanthropy was one that I did not plan or anticipate. But I do believe the Creator called on to me to work collaboratively with other Indigenous Peoples to transform colonial systems like capitalism, finance, and philanthropy. Prior to working in philanthropy I spent the last decade working in nonprofits, NGOs, and my Tribal government as both a grassroots organizer and a direct service provider. My work involved supporting and serving the most vulnerable groups of Indigenous Peoples, including Native Americans with disabilities/special needs, domestic violence victims, the homeless and mentally ill, and the formerly incarcerated.

I was fortunate to launch my philanthropic career at the Christensen Fund, where I was privileged to support the sustainability and preservation of biocultural diversity in the San Francisco Bay Area along with Indigenous stewards’ livelihoods, cultures, and well being. My work now focuses on Indigenizing philanthropy as a philanthropic advisor, strategist, and fundraiser. Going from one side of philanthropy as an organizer that relied on philanthropy to sustain the organizations I worked for, to then being in a position of power where I independently decided who would get funded and how, has resulted in me being in a new position of influence and expertise as a consultant. Along this journey I’ve learned much about how the history of the intersection of wealth, race, and gender in the United States is deeply tied to the history of philanthropy and formal charitable giving worldwide.

The notion of giving, or offering gifts, is a common practice across most peoples and cultures, and has existed for generations. But with systems like capitalism, an economic model that is foreign to the traditional economies in our Indigenous communities, this offering and exchange has shifted from a reciprocal practice to a transactional act. Because capitalism is unsustainable, it must constantly rebrand itself to maintain its validity; that includes finding new ways to hoard resources and control and maintain privileges affiliated with socioeconomic status. It should be noted that most wealth that is fueled by, and contributes to, capitalism, has been built off the backs of Indigenous Peoples, including our lands, territories, and natural resources.

In the United States, charitable giving became more formalized through various tax laws that have enabled the continued hoarding of wealth via foundations. In most cases, private foundations need to spend a minimum of five percent of their endowments via grants and other charitable expenses, which includes their own administrative expenses. It is clear that foundations, and particularly private foundations, have exploited a loophole and become a tax haven enabling the hoarding of resources, which stems from the extraction and displacement of Indigenous Peoples and our environments.

While much of the field of philanthropy reinforces an unsustainable model of economy like capitalism, there are a handful of foundations, philanthropists, regranting intermediaries (like Cultural Survival), and affinity groups (like International Funders for Indigenous Peoples), who are going against the current and changing the status quo of “charitable giving.” Amongst most of these prevalent game changers are Indigenous women. While it is certainly not easy to land a job in philanthropy, more and more of our women are stepping up and ensuring that our representation and participation are present and ongoing in such systems. Much of the fuel to our fire in these spaces stems from the phrase, “nothing about us, without us.” I’ve been fortunate to have worked with many of these system shakers. I attribute all of my success in this field to the many Indigenous women in philanthropy who have mentored me, inspired me, and taught me the ins and outs of this field. Like our women who are standing tall and strong on the frontlines to protect our lands and waters from extraction and contamination, it is also Indigenous women who are leading the transformation within philanthropy.

I often find myself struggling to describe my feelings and thoughts about philanthropy. This can be somewhat attributed to using English to describe such things, because much of its words do not fully capture the philosophies, cosmologies, perspectives, and realities of Indigenous Peoples. For some time I used to think that using the term “decolonize” over “Indigenize” was more appropriate when it came to enabling a shift in this field. But I learned that decolonizing a system that is inherently colonial is impossible. Rather, we must Indigenize a system first, if we want to truly transform it. When we use terms like decolonize, we often approach a system and ourselves by pointing out the colonial attributes, which reinforces a disconnect between ourselves and the natural world. When we choose to Indigenize something, we instead focus on those connections, relationships, and innate value systems our ancestors taught us, which still run deep in our blood memories.

I believe that philanthropy must start with the acknowledgement that a foundation’s resources in some way are tied to the extraction and exploitation of Indigenous Peoples and their lands, territories, and natural resources. It is undeniable that every dollar or form of currency that is connected to capitalism is, in fact, dirty money. This recognition of how these financial resources have been obtained will allow philanthropy to move toward transformation in a good way. Secondly, this recognition will enable philanthropy to reflect on its past, which will provide clarity in how it intends to build better future practices around giving. This reflection will show that the values systems that philanthropy holds are deeply tied to the values of capitalism—colonial values like divide, control, and conquer. Indigenizing philanthropy means there should be a shift in a value system that serves as a North Star in how they carry out their work. This new philanthropic value system can be of one that better reflects the values of Indigenous Peoples, which includes relationships, respect, responsibility, reciprocity, and self-determination.

While recognition, reflection, and a renewed value system are integral to Indigenizing philanthropy, the process to transformation doesn’t end there. In fact, those initial steps support a transition to Indigenize philanthropy. My Oneida people taught me to always use a good mind, a good heart, and a strong fire in any and everything I do in this world. One of my Haudenosaunee relatives, a Mohawk elder, once taught me that a good mind is about knowing where your thoughts are going before they get there. It means to have pure thoughts and good intentions, which is absolutely necessary when allocating resources into communities where those same resources have been used to cause harm at one point. This ties back to the value of responsibility, one that many foundations don’t quite understand in their grantmaking practices, unfortunately.

To Indigenize philanthropy means to also completely shift the processes of grantmaking. One way of doing this is to shift internal decision making processes to external decision making processes. Rather, these processes should be led and implemented by the communities themselves. Tying this back to the value of self-determination, communities should be empowered (with additional support for capacity building and technical assistance) to decide the who, what, when, where, why, and how behind the financial resources and grants that enter their community. Some foundations and regranting intermediaries have shown these cooperative models of giving to be very successful when supporting Indigenous communities. A few foundations have even been bold enough to tie the recognition of the origin of their wealth to honoring their grantmaking as a form of reparations and reconciliation.

It is important that philanthropy also supports more representation of Indigenous Peoples as staff, advisors, and experts in their grantmaking practices, especially for the foundations and institutions that are not ready to relinquish their control. Representation of our peoples at all levels of decision making should be prioritized in transforming their systems, let alone improving them. As we know, Indigenizing ourselves and these inequitable, and at times, inaccessible, systems requires a painful and long interpersonal journey of reflection and commitment. We are already seeing these positive changes in ourselves and the systems, much of which can be attributed to our women who stand tall and fearlessly to protect our peoples, traditions, and Mother Earth. The time for change is now, and it’s time that philanthropy supports the balance that our natural world needs and craves.

Photo: Daisee Francour leading a workshop for Indigenous delegates on
grant writing at the Ford Foundation in New York. Photo by Jamie Malcolm-Brown.