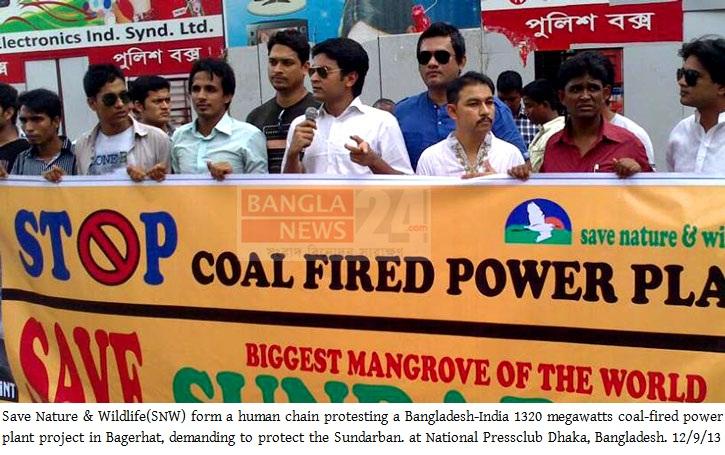 “This is a terrible tragedy and major news. It is the largest loss of life at an anti-coal protest in Bangladesh since the tragic deaths in the August 26, 2006 killings at Phulbari, Bangladesh, where three people were killed and 200 injured by paramilitaries. It is the worst overall loss of life in anti-coal protests worldwide since the killings of six people in Jharkhand, India, at two protests in April 2011,”  noted Ted Nace, the editor of Coal Swarm.

Professor Anu Muhammd, the Member Secretary of the National Committee to Protect Oil, Gas, Mineral Resources, Power and Port in Bangladesh, noted: “The villagers in Bashkhali have been loud against the destructive plans of S. Alam Group for months because the company wants to build two coal-fired power plants in the area by evicting thousands of villagers and landowners. The coal-businessmen of S. Alam Group, financed by two Chinese firms — SEPCOIII Electric Power and HTG, were fully aware of the strong opposition to the coal-power plant.”

According to the Daily Star, in December 2013, S Alam Group, struck an agreement with SEPCO3 Electric Power Construction Corporation of China to set up a coal-fired power plant in Banshkhali district of Chittagong, Bangladesh.  On February 16 this year, the government signed power purchase agreements with two private joint ventures led by S Alam Group to buy electricity at Tk 6.61 per kilowatt-hour from two projects with power generation capacity of 1,224MW.  S Alam Group  and their Chinese backers plan to initiate the power plant by November 2019 across a 600-acre site.  No consultation has taken place with communities members who would be affected.  The project will require an investment of $2.4 billion of which $1.75 billion will come from Chinese lenders.

Abu Ahmed was a witness to the police violence, himself being shot in his leg. He said that the villagers had been holding peaceful protests for days after S. Alam, the local conglomerate behind the project, started purchasing land for the plants in the village, which lies on the edge of the Bay of Bengal.  But the government did not pay attention to the village protests and the district administration remained silent for months. This led the villagers to stage a mass protest which turned into the worst tragedy in the history of coal in Bangladesh.  The government of Bangaldesh announced on April 9 that work at the $2.4 billion power plant would be suspended for 15 days, while it carries out an assessment of the plant's environmental impact, led by Bangladeshi and foreign scientists.

The plans for coal mine join a laundry list of other planned coal projects being pursued by the government of Bangladesh and foreign investors, despite huge opposition from communities, international coalitions, human rights experts, and environmentalists.  Phulbari coal project, in Northeastern Bangladesh, is one infamous case that has lead to massive protests over the 8 years since it was first proposed by GCM resources, a British-based company. Ongoing mobilizations by communities on the ground have been successful in preventing the licensing of the coal mine, and resulted in plummeting financial loss for GCM, who failed to conduct adequate social and environmental impact studies and gain the free, prior, informed consent of the communities at various stages of the project’s life.

As a rapidly developing country, Bangaldesh has a  strong demand for electricity, but communities are not willing to accept development at the cost of losing their lands and livelihoods.

In an op-ed in the Dhaka Tribune, Professor Muhammed argued,  “Tension and resistance will be certainties if a so-called development projects like this are implemented forcefully and through fraudulent activities and corruption. People will not accept any project that goes against the locals’ interests or may harm the national interests or is taken up without maintaining transparency.”

Bangladesh has made plans to ramp up its coal production, with the goal of setting up 25 coal-fired power plants by 2022.  However this lies in conflict with its goals to curb carbon emissions in line with the climate treaty negotiations agreed to in Paris in 2015 known was the COP 21 agreement, to limit global temperature rise to 2 degrees Celsius.

An analysis by the Climate Action Tracker presented at the COP 21 found that attempts to keep global warming to 2 degrees will be wildly off course if existing plans for coal-fire plants are carried out, as coal is the world’s single biggest contributor to global warming. Just by allowing the 2,440 coal-fired power stations that are currently planned would cause emissions rates four times higher than the 2-degree target by 2030.  Without a single new coal plant, allowing existing coal plants to continue operating would lead to emissions rates 150 percent higher than what is consistent with a 2-degree target.

Read more: After the COP21: How Bangladesh Can Move Past Coal and Why Rich Countries Must Help