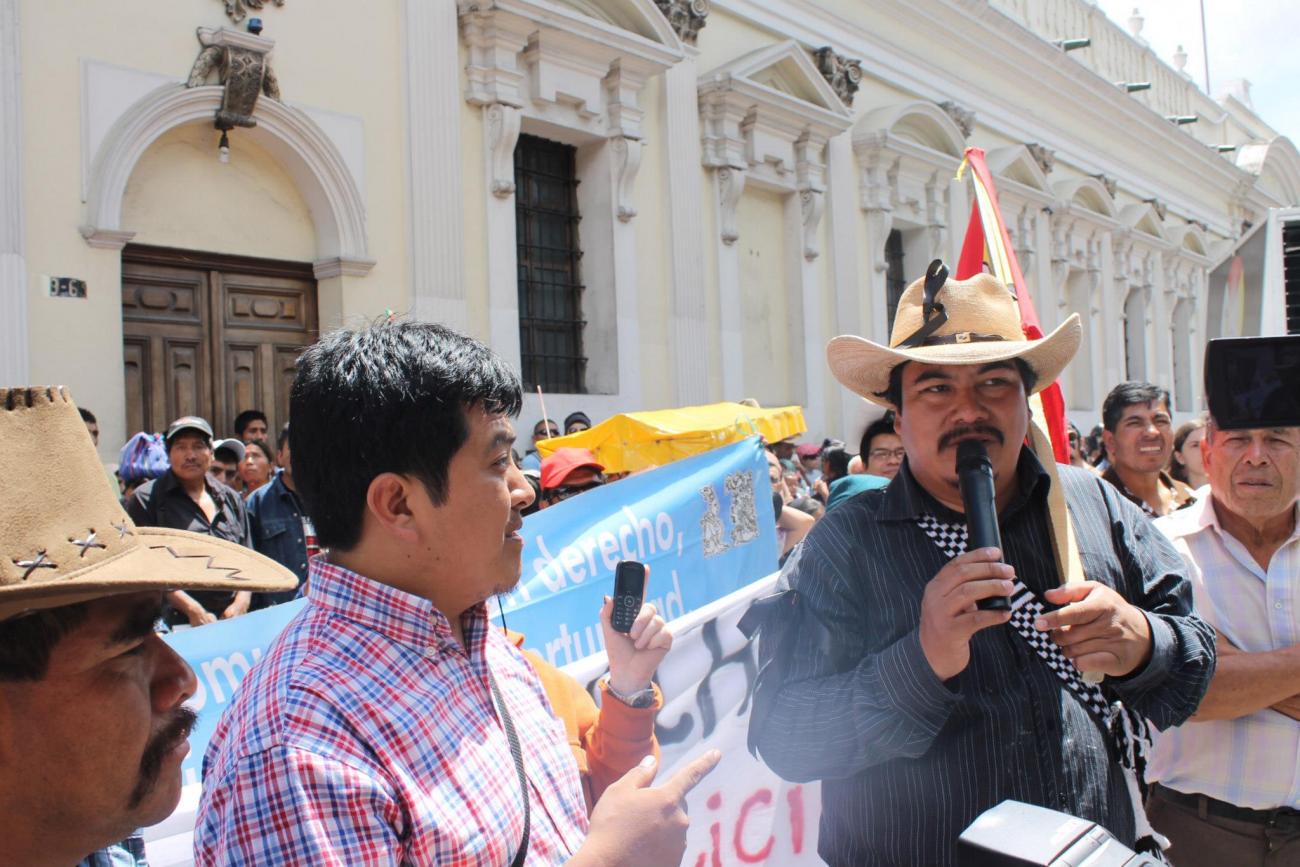 Indigenous and campesino organizations across Guatemala are on high alert as a case which has the potential to alter the course of freedom of expression in Guatemala begin hearings at Guatemala’s highest appellate court.

The case revolves around Indigenous human rights defender Daniel Pascual Hernandez, Maya K’iche coordinator of the grassroots organization United Campesino Committee, (CUC by its Spanish acronym), who is accused of libel, defamation and slander by right-wing columnist and ex-military Ricardo Méndez Ruiz, founder of the “Foundation against Terrorism” in Guatemala.

The original charges date back to  2013, when Pascual Hernández was organizing with flower farmers in the community of San Juan Sacatepequez to defend their land from the imposition of a cement manufacturing plant by company Cementos Progresos. At the time, Pascual publicly supported community leaders who had received death threats for their actions protesting the company’s installations. This was used by Méndez Ruiz to bring a case against Pasual, which has has reflected a number of irregularities of due process over the 7 years of its course thus far.

In an earlier proceeding, Pascual was denied the opportunity to make use of a tribunal established within Article 35 of Guatemala's constitution for disputes related to freedom of expression.

Rather, Judge Carmen Toaspern chose to send the case to criminal court arguing that Guatemala’s Constitutional Law on the Expression of Thought should only apply to journalists; an argument that was later denounced by the Guatemalan Human Rights Ombudsman.

In fact, the processing of libel charges as criminal charges has been discouraged by the  United Nations Human Rights Committee, which has recommended the decriminalization of libel in order to fully respect the rights to freedom of speech as recognized by Article 19 of the International Covenant on Civil and Political Rights, a treaty ratified by Guatemala since 1992.

The jurisprudence on this decision noted that Pascual cannot be identified as a communicator unless he is a trained journalist- a decision that allows for a major gap in protections for human rights defenders, community radio volunteers, and others who work as the voice of a community but may lack formal education as journalists.

In light of this, community organizations such as  Asamblea Social y Popular ASP, La Coordinación y Convergencia Maya Waqib Kej, La vía Campesina Centroamérica and  Alba movimiento, have made a call for the respect of the right to freedom of opinion and expression and in support of Daniel Pascual.

These grassroots organizations recognize the pattern of criminalization of human rights defenders and social movement leaders; of which the goal is not necessarily to win a case, but to tie the accused to a penal process that is dragged out over a number of years, removing them from their activism, and ultimately, to intimidate other activists and discredit the organization and the issues they fight for. “The criminalization and prosecution of free expression is something that is worrisome to the rest of the members of the CUC,” explained Rafael González, coordinator of the legal office for the CUC.

Cultural Survival joins grassroots Guatemalan organizations in calling on authorities to carry out a fair and transparent trial, respecting the principles of democracy, freedom of expression, and human rights, and quality before the law, particularly for Indigenous human rights defenders who have been historically criminalized, and discriminated against within Guatemala’s justice system.

Daniel Pascual began his work for in defense of Indigenous and non-Indigenous rural communities at the young age of 13. He has worked toward the fulfillment of the Peace Accords; supporting land rights for rural farmers, defending against criminalization of other social leaders, food security and food sovereignty programs, and was an integral organizer in the successful push to reject the passage of the so-called Monsanto Law allowing the privatization of seeds in Guatemala, and supported the movement to legalize community radio in Guatemala. He has participated in various activities with the Food and Agriculture Organization and the United Nations and has organized a number of peaceful marches garnering national and international attention.  He was featured as a main character profiled in the documentary film “500 years” by Pamela Yates, about the Indigenous rights movement in Guatemala.

Pascual stated during his hearing, “I consider myself a defender of human rights, and we are all aware that there are constant violations of economic, cultural, social, and environmental issues in our country. In this sense I am firmly convinced that the Universal Declaration of Human Rights of the United Nations recognizes the freedom of expression as a universal right of every person, likewise this is recognized by Article 35 of the Republic of Guatemala. Therefore I’ve done nothing more than exercise this right over the past 20 years.”

Take Action: Standing Up for Free Speech in Guatemala