Respecting Our Traditional Science and Ways of Knowing 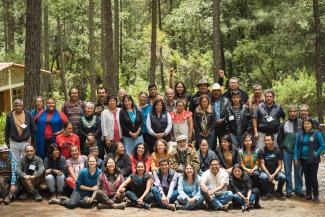 The goal of the convening was to engage in a dialogue on Indigenous perspectives of climate change from our traditional knowledge and science; how we understand, frame, and define climate change through our cultural practices and spiritual knowledge, and how we intersect with Western climate science. The causes and impacts of climate change for Indigenous Peoples and their local communities were also discussed. The meeting site, Eco-turixtlan, an eco-forestry project wholly owned by the local Ixtlán de Juárez Indigenous community, was a source of great inspiration for discussion of issues around environmental stewardship, traditional knowledge, Indigenous science, climate science, and Indigenous rights.

In the keynote address, Diné elder and Tribal leader Duane “Chili” Yazzie provided a compass for the conversations through the traditional emergence story of the Diné people, expressing the need for humankind to return to the “original instructions” of how to exist on this earth in spiritual relationship with Mother Nature. “Mother Earth started with people of four different colors settling around the world. They all had the original principles and values we should live by to sustain harmony relationships with Mother Earth and the mighty powers of the universe,” he retold.

Berenice Sanchez (Nahua, Otomí), Assembly of Indigenous Peoples for Food Sovereignty president, framed a discussion of bio-cultural impacts of climate change around the way Indigenous Peoples understand climate change; as holistic rather than parceled, rooted in place-based experiences with the natural world. In Sierra Juárez, Mexico, for example, some elders refer to climate change as “the world that is changing.” Participants discussed what we have been experiencing in our territories: the loss of plants and animals, the changes in seasons and ecosystems, the disappearance of springs, the emergence of droughts, what changes in temperatures looks like. In Mexico, as one participant lamented, “there is decreased water availability for human use and for land-based activities. We are losing seeds due to the droughts, or to the rain coming at a different time. We are also experiencing seed loss due to birds that get to the fields really hungry and take them out of the ground.”

“Our mission in life, for all of us who have accepted to defend the earth, is to bring back the original teachings.” — Suzanne Benally

Elsewhere, such as in Chiapas and Oaxaca, the coffee rust fungus has attacked shade plantations and caused much damage, endangering vast areas of forest. In California, acorns are suffering from disease related to climate change that affects the health of trees, and by extension the food base for animals and Native Peoples, as well as contributing to wildfires. And in the Arctic, Aslak Holmberg (Sami), member of the Sami Council, reported that “this summer was exceptionally warm and dry; there were forest fires. When the forest burns, it destroys the grasslands of the reindeer, affecting not only this year’s availability, but many decades ahead. For salmon fishers, the water levels were very low; the presence of salmon changes due to all this.” Cultural Survival’s executive director, Suzanne Benally, offered a summation of the conversations: “We understand climate change as the set of events and extreme alterations of the different natural phenomena related to the climate that causes drastic effects on our planet. Climate change puts us and our social, cultural, spiritual,  and economic environment at risk.”

The arrived-at consensus is that humankind’s spiritual relationship with Mother Earth has been deeply damaged in the prevailing Western neo-colonial culture, and that the separation of human beings from Mother Nature is a root cause of the current climate crisis we face. Humankind broke the sacred link with nature, and has abused and exploited the natural world that provides us with everything that we need. As one participant framed it, Western ideology has drifted far from the original teachings, from the reality. “They don’t see anything wrong in drilling for oil, extracting uranium and coal and gas, destroying the earth in the process. Internal colonialism has made it so that this Western thought is not only coming from the outside, but also from some of us. Communities get divided in front of development projects, and sometimes we get greedy and irresponsible with the Earth.”

As Indigenous Peoples, discussion is needed among our communities and our youth not only about sustainable land management, but also incorporating our traditional lifeways. Underscoring this point, another participant said, “If we are doing spring restoration, we also include cultural protocols  in the process, and we introduce stories and keep our connection to sacred springs in this process.” Changes in the climate reflect changes in our stories, our songs, our ceremonies, our dances, our spiritual traditions. Traditional knowledge has to be maintained, but it also has to be updated accordingly with new experiences.

In roundtable discussions, facilitators Daniel Pascual (K’iche), coordinator of Comite de Unidad Campesina in Guatemala and Gabriela Linares (Zapotec), member of the Union of Organizations of the Sierra Juarez of Oaxaca,  Mexico, guided conversations about the important role of land rights in Indigenous Peoples’ work toward combating climate change. The right to manage our traditional lands is an essential foundation upon which all of our lifeways,  traditional knowledge, and wellbeing rests. Other presentations gave specific examples of communities working sustainably towards food sovereignty in ways that benefit both the earth and local economies. These included shade-grown coffee, seed saving, and the promotion of Indigenous plant foods and medicines, along with networks and support for small farmers. In one such example, an Indigenous and small farmers cooperative in Tlaxcala, Mexico, who found their crops plagued by grasshoppers, solved their problem by returning to traditional practices of harvesting the grasshoppers for consumption.

“Our traditional economics is that we do not change our surroundings, but we change our behavior to fit the surroundings. Trees bring the rain, and we have a lot of traditional knowledge related to the forest. We have to keep that knowledge and conserve our forest to help the environment and help the circle of life. We believe that the model of food sovereignty is a model that must be ecologically, socially, economically, and culturally appropriate; it must be part of the right to self-determination that all peoples have,” said Andrea Carmen (Yaqui), International Indian Treaty Council executive director.

Communities continue producing their own food, preserving the seeds, and exchanging them between people.   Indigenous Peoples in Mexico are using the strengthening of tequio (collective work) and knowledge to revitalize native horticulture, including new irrigation systems and returning to organic production and the use of greenhouses with controlled use of water. “We need to recover the organic, spiritual cropping of our traditional crops, not only for their traditional value, but also for their medicinal importance and for what they represent in the general well being,” stated a participant. Some of these crops, like quinoa, cañihua, amaranth, and different varieties of tubers, have been exploited and over-priced and need to be reclaimed to our livelihoods and production systems.

Concluding the convening, a consensus-based Outcome Document outlined the participants’ perspectives and position on Indigenous Peoples’ rights and responsibilities regarding climate change, traditional knowledge, and food sovereignty. Indigenous communities are facing changes in practices and daily life, recovering, reformulating, and transforming our traditional knowledge. We relate to nature as a way to obtain our livelihoods, but the way we relate to our environment also represents mitigation and adaptation measures for climate change. We are participating in local, national, and international forums to defend food sovereignty, biodiversity, climate, and Indigenous rights. We seek not only the recognition of our ways of life and knowledge, but to be involved in the decision making processes, and to discuss ways to mitigate and adapt to the new conditions that climate change is creating.