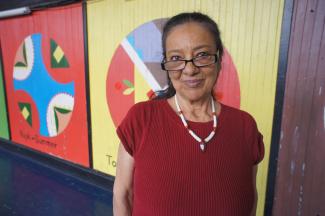 For more than 40 years, Native Americans from the Boston area and around New England have gathered at 105 South Huntington Avenue in Jamaica Plain, MA to find support and embrace their Native heritage. Formerly a girl’s detention center, the building was reincorporated in 1970. What were once jail cells are now covered in Native American adornments; murals from the 1970s are painted in hallways, and the history of New England’s oldest Native American center is embedded in every room. Originally established as the Boston Indian Council, the North American Indian Center of Boston changed its name in 1991 when it was reestablished as a non-profit. With a mission to “promote greater self-determination, socio-economic self-sufficiency, spiritual enhancement, intercultural understanding and other forms of empowerment for the North American Indian Community” and an inclusive list of services, the Center assists North American Indians in obtaining an improved quality of life.

“This is the home to Indian people, the home away from home. This is where the Indian heart is,” says Executive Director Joanne Dunn (Mi’kmaq), who first arrived at the Indian Center in 1976 and became Executive Director in 1991. “When I walked through these doors, it was very different from anything I had ever felt. These were people just like me. There are no Indian neighborhoods in Boston, not like the North End or South Boston or Chinatown; our numbers
are too small to constitute a neighborhood. We tend to be dispersed throughout the city and the suburbs. [So] I loved being around other skins. I loved seeing that beautiful brown complexion and people feeling very comfortable in their own skins and speaking their own languages and men wearing their hair long, the smudging, praying, drumming, and song resounding through the building. These are all things that are very natural here that may not be natural in other places.” Along with providing a place to celebrate Native American cultural heritage, the Center has served thousands of individuals and families over the years with programs such as child care, education, elder and family services, employment, health care, substance abuse treatment, nutrition counseling, legal aid, and transportation services.

For people like Crystal Rizzo, a computer instructor, the Center “definitely serves as a hub for those who live in an urban center. It’s a place where those who grew up on the reservation, those who were adopted out, who grew up in urban centers, can all come together and find community, find faces that look like yours, find values that are similar to yours, have your identity reflected back and strengthened, and [be] told that it’s a good thing to be Native. Especially in Boston, it’s one of the only places that you can really find that. It’s a place where we have events for the kids but also the grandparents come and the parents and older siblings, so it’s really an intergenerational place, which I think is really important in our culture.”

In 2010 the Center lost its Indian Health Service contracts due to a dispute over extending services to Canada’s First Nations, along with another four mini-grants. “The way Indian Health Service works, if you lose one, you lose them all. That’s been our biggest challenge,” Dunn says. Besides a strong, healthy, happy community, Dunn’s vision for the Center is a healthy building. She says the deteriorating windows in the gym prevent them from getting new grants; an empty grass lot in the back where powwows used to be held now belongs to the Commonwealth and is the future construction site of condos. With the support of the University of Massachusetts-Amherst and the Native Studies program, the Center will be conducting a Kickstarter campaign to raise funds for much needed renovations.

In the meantime, the Center is moving forward with new endeavors through successful collaborations with the University of Massachusetts-Boston, the Institute for New England Native American Studies, and UMass Amherst. Along with conducting a needs assessment and connecting with the Administration for Native Americans, Dunn and her collaborators are working on new service programs centering around violence against women and sexual assault. They recently offered a program to support grandparents who have become the primary caregivers to children. Now they are going after another vital piece: youth leadership. “We want the young people to step up to the plate,” she says.

Dunn speaks fondly of the era in which the Center was founded. “We used to have a hundred employees; all three floors, every floor was full, but that was in the ‘70s. That was a different time for Indian people...that was the time of AIM (the American Indian Movement), Indian activism, the Longest Walk, the re-emergence and resurgence of Indian pride— all of those things were happening in the ’70s.” But now, she says, “I don’t know if the same passion is there. I don’t want to undermine those who choose a different path because we all want security. But I certainly look forward to the younger generation taking their places and leading our people into a happier and healthier millennium. We have some very talented individuals in Indian Country and some right here in this community.”

Marilyn Francis, a community member, expressed similar sentiments of days past while reminiscing on a social media website: “My mind has been traveling back to the days of Boston Indian Council as I sit here beading. It is not only the people I’m remembering, but the building on 105 South Huntington Avenue, Jamaica Plain. I can still hear the voices echoing, the laughter, [the] pitter patter of children’s feet, doors opening and closing. The receptionist area, where we greeted, spoke and laughed coming and going to work. The Spirit of the building amazes me even still today. The parties, Halloween, Christmas, Baby Showers, grieving for the loss of a loved one, the elders, the backyard. I can still see us playing ball in the back, my Uncle Charlie pitching a game or two. BIC vans, coming in with the kids. Sammy Sapiel yelling at the young people during a basketball game, ‘move it, get that ball.’. . . My mom Evelyn with the youth group, getting ready to go somewhere with the kids. The beautiful elders, Ms. Shirley Mills, Mrs. Oleson, Ms. Rita Stephens rushing in the door from the Tecumseh Hours and so many more. And today the building still stands and serves the people with a new name, NAICOB, North American Indian Center of Boston. Thank you Joanne Dunn and everyone who con- tinues to keep the spirit alive for our People who end up in Boston and for the individuals who make Boston their home."

The Center’s employees and people like Francis keep the spirit of the community strong. As more events are held, resources expand, and support is maintained, the Center will endure. “If you’re a Native American Indian, then you should come here, even if it is just to drop by and say ‘Hello’. You will be welcomed,” Dunn says. “Whenever an Indian comes to the city, the first thing they look for is an Indian Center. That’s why we need to continue to be here. With more than 70 per- cent of Indians living off reservation, where are they going to go? We’re the oldest Indian Center in the northeast and we are still here. We are the beacon for our People. And we want to continue to be here for generations to come.”