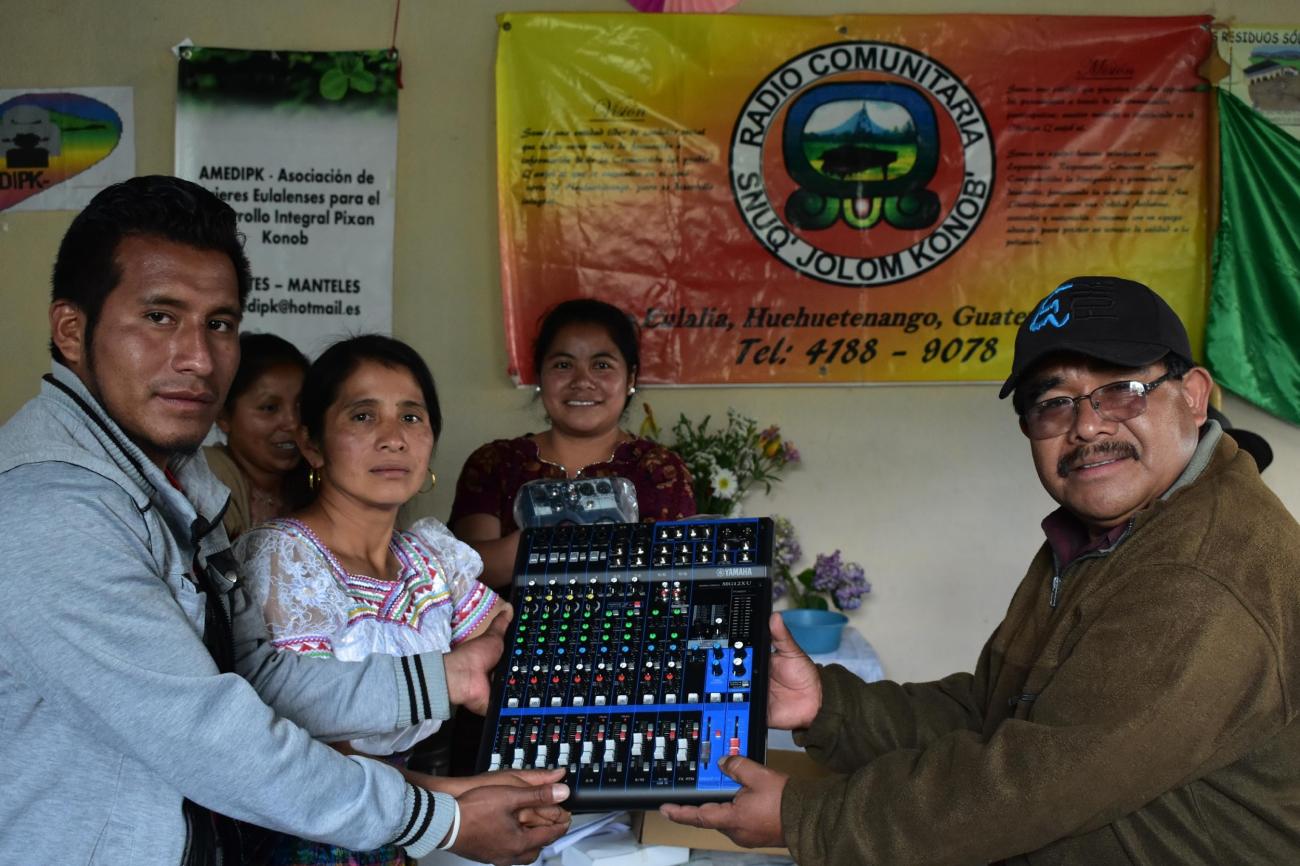 Broadcasting from the municipality of Santa Eulalia, Huehuetenango, Guatemala, Radio Snuq’ Jolom Konob’ is a community radio station run by a group of Q’anjob’al men and women communicators defending their land and territory and promoting transparency in issues that are of priority to the community. In January 2015, the previous municipality mayor, along with his supporters closed the station because of the stations’ informative broadcasting about hydroelectric companies operating in the region.

These actions were reported on a national and international level for violating the freedom of expression of the community. Lorenzo Mateo, director of the radio, expressed that: “After being closed for more than one year, on December 2, 2016, it began broadcasting again. Opening up the microphone for the people is a journey towards exercising the right of communities to access information.”

Pedro took the initiative of gathering her efforts with radio leaders to write a proposal, their objectives were similar and they discussed the need for a radio station. What activities should we promote? What are the costs? These questions got answered as the proposal came together. According to the women’s leadership: “The duties themselves have taught us that in order for our communication work to reach the political spheres of our country and the human rights entities, it is necessary that we study about communication and above all we should know a lot about the historical memory and the struggles of different Peoples.”

When Pedro got news from Cultural Survival that their proposal had been approved, they organized into different roles and began executing them. They planned: a forum with the candidates running for mayor, the purchasing of computer and audio equipment, the maintenance of the transmitter and antenna, plus four workshops on radio production. For this last one they agreed on choosing 20 persons depending on their experience and community responsibilities taking into account gender equity.

Maya Quiche journalist, Rolando Garcia, who has ample experience in community media was in charge of the training process. The training lasted four months and covered the following topics: the importance of community journalism; techniques for effective communication; techniques for interviews and news spots; analysis of the national and international legislation in favor of community radio.

When the 20 participants were done with their training they shared their appreciation with the organizers, for their support in strengthening their knowledge of community media. One of the results of the training was the production of 40 radio scripts written during the project in which they covered the following topics: citizen participation; rights of Maya women; responsibilities of regional councils of urban and rural development; Maya science and technology, amongst others important to the community.

Several changes have happened in the municipality of Santa Eulalia due to preventive measures during the COVID-19 pandemic. The president of Guatemala on March 13, 2020 announced a state of emergency in the whole country. Municipality authorities implemented preventive measures in the markets, streets, and educational centers, with the aim of reducing  the spread of the virus.

Radio Snuq’ Jolom Konob’ has made it easy to access information on COVID-19 prevention in Mayan languages and covers topics that are of interest to the community, Mateo explains: “With several of our fellow communicator peers attending the journalism training, we have covered different activities related to communication, such as: live broadcasting municipal press conferences; the creation of newspaper summary programs; live programs and with the accompaniment of the municipal transit police and the national civil police; trainings that have allowed for the monitoring of the preventive and sanitary measures; as well as interviewing neighbors and community authorities about what is happening in the community.”

Radio programs have exposed information on  the State of Emergency, curfews, COVID-19 symptoms,  who the most vulnerable to this disease are.  The station has also covered interviews with lawyers about the legislative decree 15-2020,  which contemplates benefiting the Guatemalan families with payments for basic services (electricity, water, phone and internet), approved  by the Legislative Branch but vetoed by president Alejandro Giammattei stating they were unconstitutional. This work has made other communication outlets in our municipality request to network with us to retransmit press conferences through our website. We aim to promote relevant information during this quarantine and this pandemic.

“The grant obtained from Cultural Survival allowed Radio Snuq’ Jolom Konob’ to reach a greater audience,” states Maria Pedro. The station also benefited from an equipment donation and the training enabled it to gain back its listenership and local support.

“We present our gratitude to Cultural Survival, for their important input and support during the implementation of our project: ORGANIZATIONAL DEVELOPMENT AND STRENGTHENING HUMAN RESOURCES AND COMPUTER EQUIPMENT FOR COMMUNITY RADIO SNUQ’ JOLOM KONOB’. We appreciate the help that has been given to us, where several forces came together, as likewise entities. It is a task that reinforces the importance of access to information and to Free, Prior and Informed Consent as an inherent right of Indigenous Peoples,” stated a letter written and signed at the at the end of the project by Radio Snuq’ Jolom Konob’’s Board of Directors and Association of Eulalense Women for the Integral Development of Pixan Konob (AMEDIPK).