Indigenous Leadership is Essential in Preparation for COP26 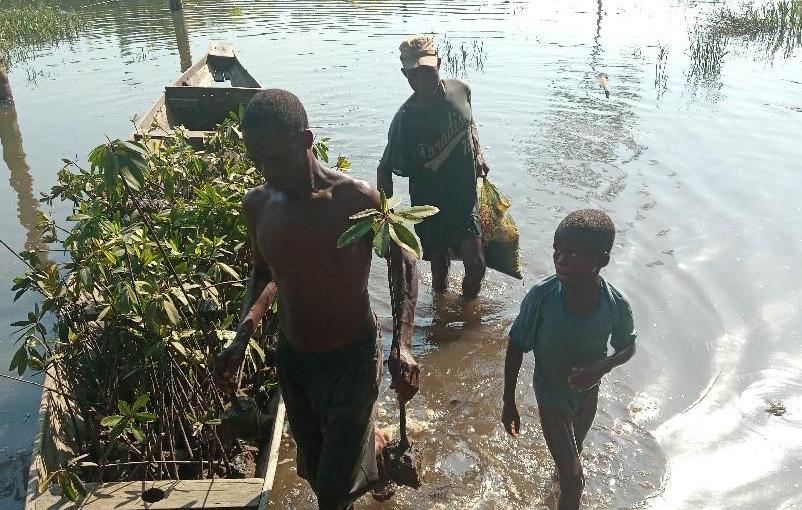 Indigenous Peoples have always been at the forefront of climate change issues, whether that is in protecting forested areas, being disproportionately affected by sea-level rise, or leading protests and movements to shift consciousness and paradigms. However, their access to having a seat at the table when it comes to international climate change negotiations and treaties has been little to none. The UN has made some progress in including Indigenous voices in these processes, and Indigenous leaders continue to leave their mark on important agreements. In the run-up to the upcoming 26th United Nations Framework Convention on Climate Change Conference of Parties (UNFCCC COP26) in Glasgow, Scotland, Cultural Survival spoke with Frank Ettawageshik (Little Traverse Bay Bands of Odawa Indians), Executive Director of the United Tribes of Michigan and President of Association on American Indian Affairs, who has been involved in international Indigenous rights advocacy for decades to learn more about Indigenous leadership and their participation at the conferences.

This year’s COP26 in Glasgow is part of the series of annual conferences hosted by the UNFCCC which aims to facilitate negotiations between national governments on meeting greenhouse gas emission targets. The UNFCCC was a treaty signed by almost all UN member states in 1992 and is the parent treaty to the Kyoto Protocol and the Paris Agreement. It is now an entity that facilitates international negotiations on climate policy through conferences like the annual COPs.

One of the key purposes of the UNFCCC and COP26 is to facilitate the implementation of the Paris Agreement. The Agreement was finalized at COP21 in 2015 and lays out a system to limit global warming to well below 2°C, with the goal of 1.5°C. On a five-year cycle, signature nations are required to submit Nationally Determined Contributions (NDCs), which state the country’s aimed reduction in greenhouse gas emissions, and their strategy for achieving this. The Paris Agreement also lays out a framework for richer countries to support lower-capacity countries through financial and technological support. These negotiations are some of those that take place at the COPs.

Lacking any formal representation within the UNFCCC, Indigenous participants in the COPs founded the International Indigenous Peoples Forum on Climate Change in 2008. This Forum organizes the Indigenous Caucus at the COPs, which Ettawageshik explained meets for two days before the beginning of the COP, and then every morning during the conference. The aim of this Caucus is to coordinate the advocacy work of Indigenous Peoples at the COP so that Indigenous Peoples can speak with a united voice and message. Ettawageshik explained that each morning, they “compare notes of what [they’re] going to do for the day, and what’s going on with negotiations.” They also decide who will attend which meetings with delegates from foreign countries as well as their own, in addition to meetings with ministers from Parties (Nation States) including the European Union. The Caucus was an important part of reducing the Paris Agreement’s initial aim of 2°C warming to closer to 1.5°C, and when Ettawageshik attended COP25, he was one of approximately 200 Indigenous Peoples at the Caucus. This Caucus is how, up until 2015, Indigenous advocates had coordinated their response to the lack of human rights and the rights of Indigenous Peoples focus in climate negotiations.

Within the Paris Agreement of 2015, the Local Communities and Indigenous Peoples Platform (LCIPP) was established. The LCIPP was included in the agreement in order to learn from traditional knowledge in combating climate change, facilitate greater involvement of Indigenous Peoples in climate negotiations, and to integrate the actions of Indigenous Peoples into national and international climate policy. After initial discussions to define what the LCIPP would look like, they established a Facilitative Working Group. Ettawageshik shared that after they “successfully negotiated with a lot of tough negotiations, that it would consist of one representative from each Indigenous region. And for Indigenous regions, even though the UN has 5 geopolitical regions, Indigenous Peoples have divided the world into seven Indigenous regions. We negotiated that each or the seven regions would itself appoint, through its own methods, one representative to be on the facilitative working group. What is important about these appointments is that this is the first time in history that Indigenous Peoples have selected and appointed their own representatives without having to submit those names to the President of the General Assembly for appointment. Previously they always had a veto over who we sent, but now we send who we want.”

Despite the resounding failure of a previous couple of COPs to be ambitious enough in terms of climate goals, or to focus at all on Indigenous Peoples’ rights and knowledge, it is hoped that as the Local Communities and Indigenous Peoples Platform becomes better established, that it will begin to have greater sway on COP climate negotiations.

One thing that Ettawageshik noted was the importance of Article 6 of the Paris Agreement. He explained that “Article 6 is about market and non-market based solutions. The non-market solutions is the shorter section. The market-based solutions section, however, is quite lengthy and very involved. It involves the process for how we’re going to implement the Paris Accord. The process envisions Nationally Determined Contributions (NDCs). NDCs are every country’s pledge of how much they’re going to reduce greenhouse gas so they can reach the goal of 1.5°... Unfortunately, the current level of NDCs only gets us to about a 3° world… The countries need to have more...ambition.  You want to have more ambition so you can reach the goal...Article 6 is important, [because] it is the mechanism by which they will compute how ambitious their NDCs actually are. Because it's going to set up the system where they can figure out the values of, say, building a dam rather than building a power plant.” Therefore, the specifics of Article 6, which are still being debated, will determine how countries calculate their NDC goals and the extent of emission reduction they will undertake.

Ettawageshik also stated the importance of being skeptical of carbon credits and financial institutions at COPs. Carbon trading is the idea of maintaining some form of carbon capture— for example not cutting down a forest—and then monetizing this “saved carbon” into carbon credits. These credits can then be bought by a polluting company to counter their own emissions. However, these trees are already maintaining a stable carbon cycle that doesn't contain fossil fuel carbon. They do not intake extra carbon simply because fossil fuel carbon is being introduced into the atmosphere. According to Ettawageshik, marked-based solutions are, “sort of like rearranging the deck chairs on the Titanic whilst it's sinking. In other words, the market-based solutions often only allow polluters to continue burning fossil fuels while getting credits for projects that give a false sense of accomplishing greenhouse gas emission reductions.”

Finally, Ettawageshik summarised the measured goals that representatives like himself and the Indigenous Caucus have for COP26: “For Indigenous Peoples, for our cultures to survive, what we need to do is to try to make sure that all of these solutions, that the nation States are reaching in doing their work to try to implement the [Paris] Accord, that the various steps they take are not done on the backs of Indigenous Peoples. In order to reach NDC goals they don’t get to build a dam and flood our traditional territory and remove a whole bunch of Indigenous Peoples when they do it and still get credits for their actions, actions that cause great harm to nature, to the environment, to Indigenous Peoples, to our rights, or the rights of the poor in their country. But under Article 6, they would get credit for a lot of that. So part of our debate as Indigenous Peoples is to be there to try to inform the process so that any process by which they get credit will end up being less onerous for Indigenous Peoples. We realize that they are going to make decisions. Our goal is to get the best decisions we can to protect against climate change. However, we may have to accept decisions that we feel fall short of Indigenous goals. When the decisions are finalized we need to do our best to limit the negative impacts on Indigenous Peoples and on all of our relations in the natural world.”

Photo: The Ogoni in the Niger Delta region in Nigeria face threats to their livelihood as the quality of their land depletes and the biodiversity of the local ecosystem deteriorates due to climate change and oil and gas extraction on their territories. Their farmlands are less fertile and integral plants are becoming extinct, escalating food insecurity. Through a grant from Cultural Survival's Keepers of the Earth Fund (KOEF) to the Lokiaka Community Development Centre, volunteers at Lokiaka worked to replenish the land by starting mangrove and fruit tree nurseries and making fuel-efficient stoves out of clay.