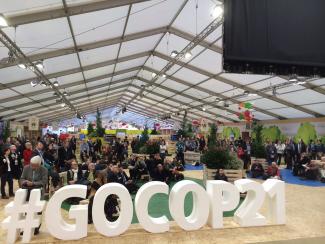 The Paris Agreement is accepted. However, we the people must push our political leaders to maintain the political will to accomplish its aims to protect our planet. The Paris Agreement, an agreement within the framework of the United Nations Framework Convention on Climate Change (UNFCCC) governing greenhouse gases emissions mitigation, adaptation, and finance starting from 2020, was negotiated during the 21st Conference of the Parties (COP 21) and adopted by consensus on December 12, 2015.

The Paris Agreement adoption is motivated by a global movement prioritizing the environment as a major factor in world decision making, fostering a deeper wisdom and a genuine understanding that our lives depend on a healthy planet. Each paragraph represents climate change issues impacting entire communities and civilizations. Now, each community, country, corporation, and civil society association must participate in the mechanisms emerged from negotiations and finalized in the Agreement to counter the climate crisis facing us all. UNFCCC Executive Secretary Christiana Figueres summarized the situation: “Climate change is for sure in this century the greatest threat we have ever faced regarding the existence of humanity.”

Indigenous Peoples and the Climate Vulnerable Forum (CVF), a consortium of concerned countries that will be most directly impacted by climate change, were the major players in the Paris COP 21 process. The 1.5°C aspiration is the heart of the Paris Agreement’s success. Intended Nationally Determined Contributions, submitted by nearly all States, create a significant mechanism to measure our carbon and initiate innovations to meet the desired measures, while human rights is recognized as a fundamental means to measure climate change in people’s daily lives. These positive principles provide the reasons for acceptance of the Paris Agreement.

The Paris Process and Saving the Planet

A little more than a month from the opening of the COP 21 session, there was a 30-page text with 5 pages of brackets to be agreed upon. Two major movements decided to host events immediately prior to the Conference to prioritize positions for the Paris process. The Climate Vulnerable Forum, held in Manila, Philippines, is a South-South cooperation platform for participating governments to act together to push for 1.5°C. Additionally, the United Nations Educational, Scientific and Cultural Organization (UNESCO) hosted Resilience in a Time of Uncertainty: Indigenous Peoples and Climate Change on the eve of COP 21.

The 1.5°C campaign (#1o5C) was coordinated by the Climate Vulnerable Forum and CARE International to encourage support for a sensible, evidence-based strengthening to 1.5°C from the original 2°C climate goal. The campaign and Manila summit are recognized as crucial components to shift countries to agree to language of 1.5°C in the Paris Agreement. Ever since Copenhagen, the Climate Vulnerable Forum were strategic to secure language in the UNFCCC process. The final paragraph of COP Copenhagen was the thumbprint of Maldives heads of state measuring the difference in the lives of people on the planet. It became the Structural Expert Dialogue 2013-2015, with a report analyzing the half degree difference between the original and revised climate goals that provided the research behind the CVF movement. Saleemul Huq, Chair of the CVF expert panel, said, “We reiterated our strategy to ask for 1.5 degrees and tell the world this is our sine quo non. If we don’t get it, we don’t agree to anything.” One of the other most significant parallel spaces was the UNESCO-hosted conference, which recognized the value of Indigenous knowledge to combat climate change and as a strong voice with a new vision for the future of our planet.

A Big Opening Day and Many All-Nighters

Bringing heads of state in at the beginning of COP 21 instead of the end was a calculated strategy. To coincide, the Pacific Islands States of the Climate Vulnerable Forum aimed to meet with President Obama to guarantee US understanding of the united position of the Pacific to aspire to achieve the 1.5°C. The Pacific Islands heads of state were able to secure the meeting and state its intention to push ahead for 1.5°C with hopeful support, or at least hope of not being blocked by the world’s superpowers.

The Pacific Islands also coordinated a full day of conferences on Islands and Climate Change at the Tara Oceans and Climate Pavilion, focusing on Indigenous knowledge being fundamental to building adaptation strategies and local solutions among islanders. The conference’s focus was to foster synergy that would result in solutions for Pacific Island States rooted in Indigenous culture.

The COP 21 parallel events, such as major annual forums, are spaces where many solutions are created. Former High Commissioner for Human Rights, Mary Robinson, was a driving force at the Development and Climate Days, demanding inclusion of the UN Sustainable Development Goals as a major process to reach the Paris Agreement. On the anniversary of the Universal Declaration of Human Rights, in the city where it was adopted in 1948, the Human Rights and Climate Change Caucus, along with other human rights-based movements and Indigenous Peoples, were committed to ensure that operational paragraph 2 includes human rights and Indigenous Peoples language specifically. Campaigns were coordinated via social media, parallel side events, embedded Pacific civil society in state delegations, peaceful protests around Paris and in the actual negotiation halls, and late night meetings directly with diplomats.

In the end, human rights made the headlines thanks to the Office of the High Commissioner for Human Rights, led by the current high commissioner, Robinson, and a delegation of UN special rapporteurs on various themes. Human rights should have been included as a cross-cutting principle in the preamble and operative part of the Paris Agreement. The Friends of the Principles, headed by Mexico Ambassador Luis Alfonso De Alba and Mary Robinson, spearheaded the diplomatic effort for inclusion of human rights in paragraph 2.

There is ingenuity behind initiatives to guarantee human rights in the face of the climate crisis. The Commission of Human Rights in the Philippines accepted the claim against world’s biggest carbon polluters submitted by 15 NGOs, including Greenpeace Southeast Asia, and directly impacted community members based on a peer review study of the 50 companies responsible for the majority of global carbon emissions.

Another important element of the Paris Agreement was the submission of Intended Nationally Determined Contributions by nearly all 195 members by the conclusion of the 2-week COP.

Intended Nationally Determined Contributions are significant and essential mechanisms to measure whether or not we reach the target of 1.5°C. Currently the math suggests we won’t reach the goal. However, the review process begins in 2016 with the 5-year review cycle for Nationally Determined Contributions as the first measure. Professor John Knox, UN Special Rapporteur on Human Rights and the Environment, said in a lecture prior to the Paris opening, “What happens after Paris is the big question. What will that mean for implementation and follow-up? How will the language be implemented?” As one French diplomat commented, “Paris won’t be the end of the story. It will be the beginning of a new one.”

Figueres summarized the spirit and substance of Paris Agreement: “Paris is actually meant to be multi-decade process with a racketing up mechanism every five years to assess where they are and be able to bring higher efforts to the table.” To usher in this new era of implementation, Permanent Missions of France and Morocco hosted the side event From COP 21 to COP 22: International Geneva’s Mobilization Continues. Helen Clark, administrator of the United Nations Development Program, said, “The Paris Agreement has the potential to put economies and societies on a path to green, risk-informed, and inclusive growth, and move our world towards a zero-carbon, sustainable future. The achievement of national climate targets must become one of the benchmarks of our success in pursuit of sustainable development.” On Earth Day, recognized by the United Nations on April 22, the Paris Agreement will be opened for signature at the UN headquarters.

ALL PHOTOS BY JOSHUA COOPER.