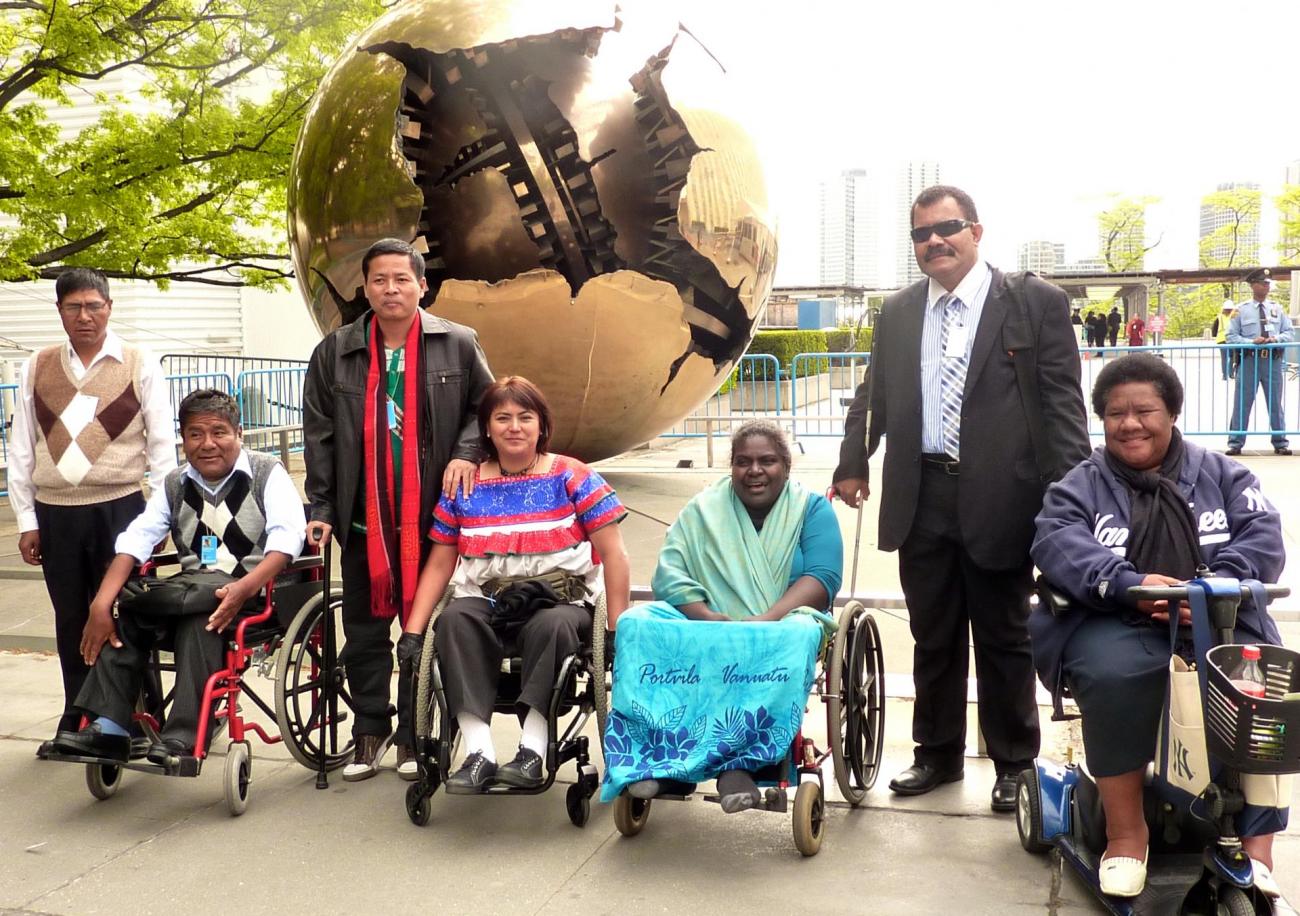 Although no global census exists, the United Nations Permanent Forum estimates that there are as many as 54 million Indigenous people with disabilities. “Persons with disabilities are a heterogeneous group. They are women, children, sexual minorities,” reflected Pratima Gurung (Gurung), General Secretary of the Indigenous Persons with Disabilities Global Network and President of the National Indigenous Disabled Women Association, during a recent International Indian Treaty Council webinar on the topic. “In a normal situation, these people are marginalized and excluded because of their Indigenous identity, their disability identity, and their other identities. In the COVID-19 situation, the marginalization and discrimination that they face in their daily life overlap… People with disabilities are invisible. Women are invisible. In the COVID-19 response? They are unheard, their voices are unheard.”

As governments, scientists, and health officials scramble to comprehend a complex and unknown virus, the ways in which they frame the problem has drastic consequences for those on the ground. Incomplete and unhelpfully aggregated data on the pandemic’s disproportionate impact on Indigenous communities obscures their elevated risk levels and stymies targeted distribution of vital aid. Climate change, sea level rise, environmental degradation, and pollution⁠—along with their deleterious effects on Indigenous people’s health⁠—become less visible, not more. Yet these factors, among others, make Indigenous peoples statistically far more likely to experience disability in comparison to the general population.

In a pandemic, invisibility and marginalization are lethal. Supplies that people need for daily life are delayed by or diverted to fight the pandemic. Rationing of saline, catheter pipes, plasma factor, and medicines of all types causes disease progression, flare-ups, and new infections. Indigenous communities are often overlooked or undercounted in the allocation of what resources exist. Quarantine provisions are often inaccessible to people with a range of disabilities, and are often not women- or Indigenous-friendly. As support workers fall ill or relocate to avoid the pandemic, their clients are left without care options. People with disabilities are overlooked in the allocation of unemployment and workplace assistance, often because of the false stereotype that disability is inability. As economies tighten and social relief dissipates, rates of violence and abuse against Indigenous women and people with disabilities is on the rise. The threats of homelessness, job loss, and poverty rise alongside them.

Even in New Zealand, which has been lauded for its successful control of the COVID-19 pandemic, people with disabilities are dangerously overlooked. One simple example among many, offered by Kera Sherwood-O’Regan (Māori) from SustainedAbility, lies in the legal framework which made people with disabilities the employers of their support workers. This means that, during a pandemic, people with disabilities were individually tasked with obtaining personal protective equipment for themselves and their hands-on care givers. With rampant national hoarding, and without access to pre-allocated supplies, people with disabilities were left in the dangerous position of either not having care or placing themselves and their support workers at elevated risk. “That was a burden that should have been borne by the government and could have been borne by the government, if they had actually collaborated with Indigenous disability services groups,” said Sherwood-O’Regan. “We cannot address inequities in health services, if we are not involved in the health system.”

Gurung noted the same pair of problems in her home in Nepal. “There is a huge lack of representation for Indigenous people with disabilities and a lack of an integrated approach between people, states, and development partners,” she said. There is no one solution that will work for all Indigenous Peoples, nor for all people with disabilities. Both categories are wonderfully diverse and, in combination, even more so. “Someone with an intellectual disability affected by COVID will need a different treatment than someone who has an auditory or motor disability,” remarked Montufar. “If we want to have something good, those who are affected need to be present in the discussion. It’s important to remember: nothing about us, without us.”

Indigenous people with disabilities deserve equitable access to quality medical care. New and experimental treatments administered within overloaded hospital systems already pose huge risks for people with functional diversity. For those who are also Indigenous, the additional alienation and prejudice they face in medical spheres is unconscionable. Moreover, mainstream medicine’s tendency to ignore or dismiss the fact that Indigenous people practice Traditional medicines is painful and deeply unproductive at best. During COVID-19, it will be the cause of preventable deaths.

Calling for a Co-Creative Framework

A collaborative, co-creative framework is vital to correcting the poor choices which have unnecessarily increased the risk to and suffering of Indigenous people with disabilities. Included on such a list would be the many life-threatening breakdowns in communication. As Sherwood-O’Regan noted, even in New Zealand “there were disabled, Indigenous people living off the grid, without access to technology. They didn’t know there was a pandemic until their support workers stopped showing up.” But it’s not just those off the grid who are locked out of the information. Screen-reader inaccessible websites and heavily designed graphic public service announcements are inaccessible. Sign language interpretation is stylishly reduced to an illegibly small size and thus rendered useless. Reliance on the mainstream media’s ability to disseminate information means that information is only disseminated in the languages the mainstream media speak. Even when successfully transmitted, information provided about COVID-19 prevention is frequently culturally inappropriate for Indigenous people’s lived experiences and unimplementable within Indigenous communities.

Communication also needs to run in two directions. It is not that Indigenous peoples with disabilities cannot speak. Artificial barriers, physical and cultural, create a series of hurdles around spaces for political participation. “Disability should not be a limitation to going to these meetings to present our issues or cases,” noted Petuuche Gilbert (Acoma Pueblo), the Indigenous World Association President, who reflected on his experiences as a blind Indigenous man. “It is important that we as Indigenous peoples are struggling to survive under colonialism. Everything that we can say or do to help each other is beneficial.”

Sherwood-O’Regan powerfully named another problem with the global messaging around the pandemic. “The narratives about COVID-19 really undermine disability rights and Indigenous sovereignty. There’s a strong narrative that, ‘It’s okay, COVID-19 will only affect those with preexisting conditions… and what that says to a lot of us in the disability community is that we don’t matter.”

“Let’s take the opportunity of this pandemic situation to reach the most marginalized,” Gurung remarked. “Let’s see those layers of multiple identities that impact people as Indigenous people with disabilities, as women with disabilities. Let’s create an example of best practices: a human rights based approach, working and collaborating with people with disabilities around the world. It’s time to act collaboratively. To prove to the world that Indigenous People have challenges and solutions within themselves to support the most vulnerable people. Learning and understanding, and leaving no one behind.”