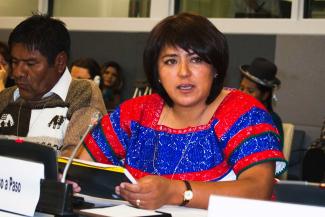 Born in San Miguel Totolapan, Guerrero, Mexico in 1969, Olga Montúfar Contreras (Nahua) fell ill with polio as an infant, and when she was nine months old her parents decided to move their family to Mexico City. During her adolescence she was raped. In spite of the violence of the trauma, it gave her the opportunity to become a mother. The event also inspired her enormous passion for defending the rights of Indigenous women and girls with disabilities.

Despite the economic burden of migration and the cost of medical treatment for her polio, Montúfar Contreras attended regular school with the support of her whole family. She finished with a degree in mechanical engineering, but even this did not guarantee her a job—a second challenge that drove her to join the growing Disability Rights Movement in 1994. She participated in some of the key events of the movement in Mexico and was recognized for her lobbying talents, having influenced various public policy developments both at the national and local levels.

During the birth of the Convention on the Rights of Persons with Disabilities in 2007, Montúfar Contreras worked with a group founded by Don Gilberto Rincón in Mexico City. She gained firsthand experience with the fundamentals of the convention, which would later become part of the basis of general law for people with disabilities.

Dissatisfied with her previous level of education, Montúfar Contreras went on to earn a master’s degree in social policy and development, which strengthened her ability to lobby for the rights of people with disabilities. She participated in courses through the US International Mobility Program, such as one offered through the Inter-American Human Rights System and the John F. Kennedy Center, as well as the training offered by the Office of the UN High Commissioner for Human Rights.

Today, despite her physical limitations and limited verbal communication abilities, Montúfar Contreras has become a key figure in raising awareness on the intersectionality of the human rights of people with disabilities and Indigenous women and girls. She spoke with Cultural Survival Indigenous Rights Radio Producer Rosy Gonzalez at this year’s session of the UN Expert Mechanism on the Rights of Indigenous Peoples in Geneva, Switzerland.

Rosy Gonzalez: The fight for the rights and the application of rights of Indigenous lands has been a constant fight since colonial times. Indigenous communities are distinctive and diverse, so their needs are distinctive and diverse. Indigenous communities have had to organize to get attention from national and international levels of governance. An example of this is the sector of Indigenous people with disabilities who, after a lot of organizing and work, were granted the opportunity to have their demands heard at the international level in front of the Permanent Forum and the Expert Mechanism on the Rights of Indigenous Peoples. Can you speak to this?

Olga Montúfar Contreras: I am a representative of a foundation called Paso a Paso, a foundation of Indigenous persons with disabilities. I am also a representative of the global caucus of Indigenous people with disabilities. We are a young movement that takes part in the Forums and the Mechanism. 2012 was the first year we did a live appearance. That year, with our presence, we were able to study the situation of disabled people in the global sphere.

In order to learn more about the subject, I took advantage of our time in New York City and met with UNICEF. We created a packet that featured the statistics of the number of Indigenous youth with disabilities, what the prospects are for our Indigenous disabled youth in the whole world. It was a major advancement considering there is no information about our disabled youth, let alone anything about our adults. Also we were involved in the dialogues at the global conference.

Making that happen took a major effort because we had neither time nor money. We negotiated with different parts of the country, working to make them notice us and send a delegation to represent us. Today we have nine [representatives] inside the World Conference on Indigenous Peoples. And now with my presence here, the recommendation is that the revision that will come out of the studies on [people with disabilities] should include the subject of Indigenous people with disabilities. I urge the Expert Mechanism to name the clause “Consulted Indigenous People with Disabilities.” Another recommendation is to form a working group that focuses on the intersectionality of the rights of Indigenous people with disabilities so they can better understand when their human rights are violated and how to exercise them. With the support of Expert Member Albert Barume, it has been guaranteed that in the next Expert Mechanism, Indigenous persons with disabilities will be represented. I believe that will be extremely positive.

Rosy Gonzalez: Everyone has their own motivations for wanting to fight for the rights of Indigenous people. What motivated you?

Olga Montúfar Contreras: Fortunately I grew up with professionals, teachers in the community. So when they realized I was disabled at nine months old, they never treated me differently. When I started school, I had a classmate who was a young boy who bothered me constantly. He made fun of me, shamed me, and one day when he told me that I was something entirely different from him I no longer wanted to go to school. I used leg braces that went up to my waist, they held me up like a doll. So I said, “I’m going to throw myself [on the ground], I am going to scream and I’m going to tell them I don’t want to go!”

I never expected the reaction my father would have. He picked me up with all of his strength, stood me up with my braces, and said, “School is never going to adapt to you, you need to adapt to school. So you will go to school and you will study.” So I turned around—back in those days you did not look people in the eyes because it was seen as a disrespect— but in that moment I did it. I turned around and told my father, “I promise you I will be the best doctor in the world and I will cure all of the children in the world who are like me. I don’t want them to go through what I go through.”

I have a different profession. I can’t cure their bodies, but I am changing their lives.

Listen to the full interview at: www.cs.org/rights