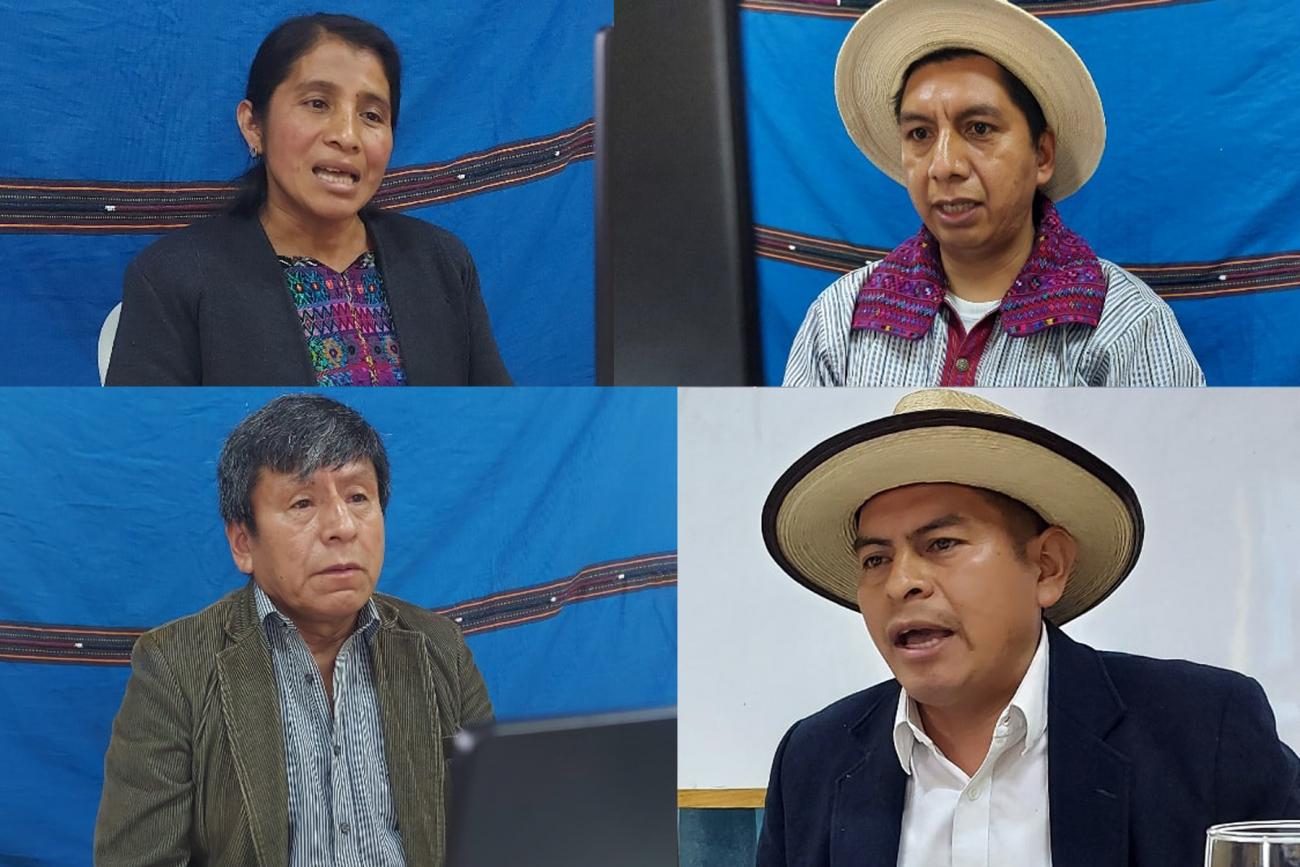 The historical discrimination of the States towards the Indigenous Peoples is summarized in the denial of their human and collective rights. In Guatemala, these violations are evident through exclusive laws such as the General Telecommunications Law decree 94-96, making the country's multilingual and multicultural multiethnic character invisible, granting privileges only to a small group of businessmen. The auction process is the only mechanism currently available to obtain radio frequencies for broadcast from Indigenous community radio stations.

“This system violates international law, [such as Article 16 of the UN Declaration on the Rights of Indigenous Peoples, which state that states must consult and cooperate with Indigenous Peoples and obtain their Free, Prior and Informed Consent before adopting and applying legislative or administrative measures that may affect them, such as the General Telecommunications Law of Guatemala,” highlighted Jose Francisco Calí (Maya Kaqchikel), UN Special Rapporteur of the Rights of Indigenous Peoples, during the June 9-10, 2021 public hearing at the Inter-American Court of Human Rights.

Anselmo Xunic, a volunteer for the Indigenous community radio station, Radio Ixchel, mentioned before the High Court that the stations are criminalized and raided. In 2006, Radio Ixchel was raided by the Public Ministry and their transmission equipment was confiscated. The station was charged with the crime of theft of radio frequencies. Although  Xunic was not in the booth when the incident happened, he was summoned to court, a year later, for being one of the leaders of the organization that supported the station. When Xunic appeared in court, the Public Ministry requested to link him to the crime, however lacking evidence, the judge did not find any crime, ruling a lack of merit.

“The work of Indigenous community radio is to bring information, education, health programs, citizen participation, art promotion, educational programs, women's leadership,” relayed Maria Pedro from Radio Jolom Konob in Huehuetenango. Pedro has worked on the drafting of initiative 4087 to legalize community radio in Guatemala, which still has not been passed as law. She is a member of the Association of Eulalia Women for the Development of Santa Eulalia and shared what they do, “we develop content on the importance of the participation of women at the community level, decision-making, care for the environment and food sovereignty.”

Rosendo Pablo from Radio Xobil Yol kman Xum in Todos Santos Huehuetenango, emphasized that “Community radio is the means that links the community with migrants located in the United States, by also transmitting on the internet, the programs that are broadcast are of interest of the population, and as the majority is monolingual.” Ninety percent of their transmission is carried out in the Mam language.

The witnesses agreed that although State institutions such as health, justice, and education centers, among others, all utilize community radio to reach local populations, the State through the Public Ministry, violates Indigenous Peoples’ right to freedom of expression, by raiding, confiscating equipment, and jailing communicators who volunteer at the stations. They also denounced before the Inter-American Court of Human Rights the fears of community journalists being criminalized after the hearing, for calling out the State of Guatemala on the multiple violations of freedom of expression, requesting that their integrity, respect for their human rights and Indigenous Peoples be safeguarded.

The expert opinions presented before the Court gave evidence how the States in the world, for decades, have supported an oligopolistic patronage regime, concentrating radio frequencies in a small group of businessmen who control the media, justifying the artificial scarcity to limit this right. Guatemala is no exception, as could be seen during the hearing where Guatemala justifies privatization as a democratic way of granting access to frequencies to all the population based on capacity to pay.

State representative Lilian Najera pointed out that there are no violations to the right to freedom of expression, equality, cultural identity within the telecommunications law and that the government should not be held responsible for alleged violations of human rights.  Other State representatives indicated that the government follows international recommendations on telecommunications, which stipulate the use of the spectrum in a rational and effective way,  and according to their interpretation it is by limiting the number of the frequencies and the space of the spectrum to a minimum.

Likewise, State representatives repeatedly justified that the General Telecommunications Law “at no time intends to discriminate or exclude Indigenous Peoples or a specific group,” and that the law grants the right to any person to participate in public auctions promoting free competition. The fact that “an economic criteria does not justify classifying any discrimination, since the fact that some have more or less possibilities to enter a contest is a circumstantial, eventual, or unpredictable issue, which does not discriminate, therefore, the opportunity to participate is for all that have the interest.”

In light of the commitments undertaken by Guatemala in the 1996 Peace Accords, international human rights conventions and treaties, the American Declaration on the Rights of Indigenous Peoples, as well as international standards on freedom of expression, it is inconceivable that the country keeps avoiding from their responsibilities. The American Convention on Human Rights makes it clear in its articles 1, 2, 13, 24 that the State is obligated to respect rights, pass legislation in accordance with international law, respect, protect and fulfill the right to freedom of thought and expression, and the right to equal protection.

“The commitments assumed in the 1996 Peace Accords became law when the Framework Law 52-2005 was approved,” emphasized Jose Francisco Cali. “Guatemala has legal obligations, by virtue of the numerous international instruments that it has ratified, the American Declaration on the Rights of Indigenous Peoples which states that Indigenous Peoples have the right to establish their own communication media in their own languages.” He also stressed that community radios are essential in promoting Indigenous languages, cultures, education, and information.

Ancestral authorities, represented by Julian Bal, emphasized, "We support and take care of community radio stations with our lives if necessary," and requested that the honorable Inter-American Court, " intervene so that the State recognizes our rights within the legal framework and respects and promotes community radio stations so that nothing and no one can disturb our peace and harmony and our self-determination.”


According to the Guatemalan Constitution, the State is the one that administers the frequencies, therefore it must be the one to distribute radio frequencies equitably and adopt legislation to recognize the operation of Indigenous community radio in the country. One of the proposals that has advanced to its second reading is Initiative 4087 Law on Community Communication Media, which must be approved. Expert statements exemplify how several Latin American countries have updated their regulations and granted frequencies for community use, including Uruguay, Bolivia, Colombia, Mexico, which at the same time have divided the radioelectric spectrum in equal parts, 33 percent for commercial use, 33 percent for state use and 33 percent for community use.

This distribution is adapted to the needs of the country, with a population of more than 18 million inhabitants and 25 linguistic communities. When the State of Guatemala distributes the spectrum in three sectors, commercial, state and indigenous community, in an equitable way, it will guarantee the plurality of voices and the democratization of the radioelectric spectrum, in addition, it would comply with Article 9 of the Inter-American Democratic Charter, which emphasizes that the “elimination of all forms of discrimination, especially gender, ethnic and racial, and the various forms of intolerance, as well as the promotion and protection of the human rights of Indigenous Peoples, which contribute to the strengthening of democracy and participation citizen.”

It will take the Inter-American Court of Human Rights several months to rule on this case.  Community radio stations will continue advocating for their freedom of expression rights in Guatemala by raising awareness on this historic case among Indigenous communities and government representatives while waiting for the final decision.