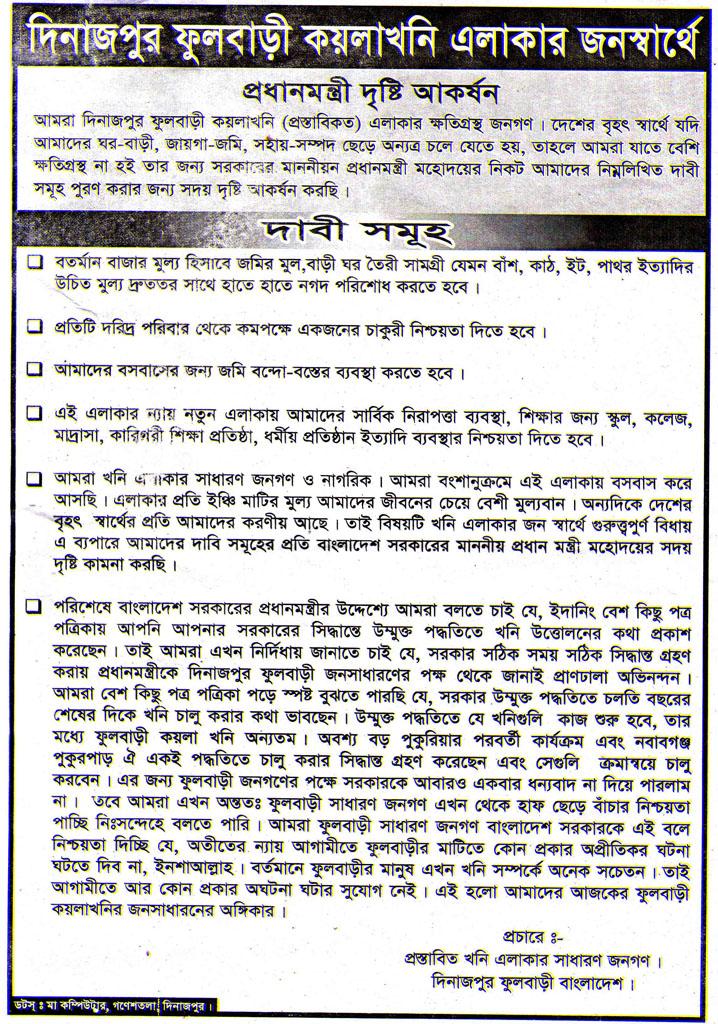 With the appointment of a new director, the London-based company GCM Resources is redoubling its efforts to install the Phulbari coal mine in Northern Bangladesh, despite calls by the UN for the project’s immediate halt.

The company released a statement in late April outlining a new strategy to “address the needs of the government and the people of Bangladesh” in what appears to be an effort to convince the government of Bangladesh and its citizens that the coal mine is in their best interest.

Coinciding with this new strategy has been the release of a series of posters and flyers, produced anonymously, claiming that that people in Northern Bangladesh have extended their support for the Phulbari open-pit mine. However, campaign partners on the ground in Bangladesh explained: “Those who are distributing these leaflets are not from the local population... but from outside by cronies of GCM. Local activists and protestors against the mine are still strong and resilient in their resistance against the mine.”

Similar leaflets were distributed among communities in 2006 causing upheaval  just prior to the death of three protesters in August of that year.  Activist groups are concerned that the leaflets could bring renewed divisions within the community. Activist Rumuna Hashem explained: “These posters and leaflets are published in anonymous names so as to confuse people, create mistrust and apathy among inhabitants, and transform divisions among activists within Phulbari, Parbotipur and Dinajpur.”

On May 7, 2012, the National Committee to Protect Oil Gas and Mineral Resources, an ally against Phulbari coal mine, held a countrywide demonstration in front of power station in the capital city of Dhaka and denounced the leaflets as false propoganda.  The demonstrators were met with a forceful police barricade leaving many injured.