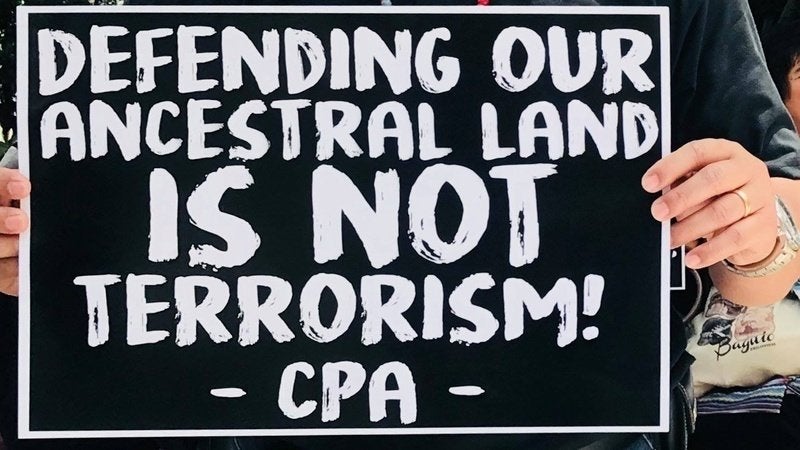 Amid the COVID-19 pandemic and the Philippine government’s Enhanced Community Quarantine, a smear campaign has been intensified against the Cordillera Peoples Alliance (CPA) -- an Indigenous and human rights coalition in the Philippines. Allegedly perpetrated by the Armed Forces of the Philippines (AFP), the Philippine National Police (PNP), and allies of President Rodrigo Duterte’s regime, the attacks include death threats and social media posts targeting Indigenous activists and their family members, including minors.

The smear campaign escalated after the CPA released a statement criticizing the Duterte regime’s decision to devote resources to spreading anti-Communist propaganda leaflets in parts of the Cordillera region of the country on April 12, 2020. The statement noted that the large sum of money devoted to spreading the leaflets could have been spent on COVID-19 health and economic relief efforts instead.

Meanwhile, the CPA reports that in the Cordillera region, "The lockdown has caused the livelihood displacement of thousands of people who are running out of money to buy food, medicines and other basic household necessities. If the lockdown continues for a few months, the survival of indigenous peoples and marginalized sectors are at stake not only from the threat of COVID-19 but from hunger and the absence of other basic needs."  CPA has been organizing to serve Indigenous families through the Serve the People Brigade – Cordillera Disaster Response Network and the Health for the People Brigade to distribute relief goods (beans, rice, sugar, oil, etc) and making and distributing facemasks.

Attacks on Indigenous activists, environmental activists, and human rights defenders by the government are not a new phenomenon in the Philippines. “Red-tagging” refers to the propaganda tactic employed by the government in which individuals, organizations, or institutions get publicly branded as Communist or leftist terrorist groups.  Although the country is technically a constitutional democracy, international human rights organizations have decried the government’s use of red-baiting tactics to target individuals who criticize them, arguing that it undermines democracy and threatens Indigenous human rights defenders, journalists, and their ability to carry out vital work, such as humanitarian efforts for COVID response.  In the past, President Rodrigo Duterte has incited civilians to violence offering bounties, and particularly targeting women with violence.

Activists from the Cordillera Peoples Alliance are the most recent victims of red-tagging. The CPA, which was established in 1984 by 27 organizations from the Cordillera region, has a long history of advancing Indigenous Peoples’ rights and promoting peace and self-determination. The CPA has grown to include 207 organizations and has earned national and international recognition for its work, including awards such as the Gawad Bayani ng Kalikasan in 2009 and the International Eco Water Award from the Government of South Korea in 2014.

Other Indigenous leaders have also been subject to unfounded terrorist accusations by the government of the Philippines. In 2018, the Philippine Department of Justice listed 649 alleged terrorists, including the former UN Special Rapporteur on the Rights of Indigenous Peoples Victoria Tauli-Corpuz and Joan Carling, co-convener of the Indigenous Peoples Major Group on Sustainable Development. The United Nations and various Indigenous and human rights organizations, including Cultural Survival condemned the Philippine government for putting these human rights leaders on its terrorist “hit list.” Three special rapporteurs, Forst, Kaye and Ní Aoláin, said that the allegations against Corpuz were made “in retaliation for her invaluable work defending the human rights of Indigenous peoples worldwide, and in the Philippines” and that “the criminalizing discourse used by Philippine public officials undermines the value of the vital work of human rights defenders, denigrates them in the eyes of the public and may put them at risk of threats, violence or other forms of harassment.”

In 2019, Cultural Survival's Keepers of the Earth Fund provided a small grant to the Cordillera Peoples Alliance. This  grant helped CPA and its collaboration with the Kaling Peoples of Kalinga province to launch the “Let the Chico River Flow Free” campaign, which aimed to educate Indigenous communities on their rights to Free, Prior and Informed Consent (FPIC), particularly as it related to a series of hydropower projects carried out by the Philippine government that threatened the environment and livelihood of the Kalinga Peoples.

Sign petition:
Appeal for Urgent Action on the Attacks Against the CPA and its Leaders