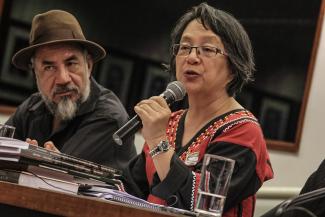 The recent #MeToo and #TimesUp movements have brought to the surface the ugly realities women all over the world face daily. For many Indigenous women, that reality is even more acute. Indigenous women and girls are murdered and disappear at alarming rates. According to the World Bank, one billion women—one out of three women globally—will face intimate partner violence or sexual violence in her lifetime. Statistics on violence committed against Indigenous women remain unreliable and incomplete, while statistics that do exist are believed to vastly underestimate the true number of murders and disappearances of Indigenous women around the world. Indigenous women are disproportionately affected by violence and discrimination because of their intersectional identities that make them more vulnerable than other groups in society. Underlying factors of poverty, historic marginalization, racism, and legacies of colonialism have made Indigenous women frequent targets of hatred and violence.

In Canada, Indigenous women are murdered at a rate seven times higher than non-Indigenous women. In the United States, the National Institute of Justice has released staggering statistics showing that 84 percent of Alaska Native and American Indian women have experienced some form of violence in their lifetimes, ranging from psychological to sexual and physical violence. Despite the gravidity of the situation, 38 percent of Indigenous women victims were unable to access legal, medical, and other services, underscoring a tremendous lack—and need—of resources to support victims.

In September 2015, United Nations Special Rapporteur on the Rights of Indigenous Peoples, Victoria Tauli-Corpuz (Igorot), wrote in a special report on Indigenous women and girls that Indigenous women all over the world experience a “broad, multifaceted and complex spectrum of mutually reinforcing human rights abuses” due to their particular position of vulnerability amongst patriarchal power structures. Her report cited a variety of statistics further highlighting the dark reality facing Indigenous women. For example, Native American and Alaska Native women are 2.5 times more likely to be raped or sexually assaulted than other women in the U.S., while 86 percent of reported cases are perpetrated by non-Natives; and Indigenous women in Canada are 4 times more likely to be murdered than non-Indigenous women. The rate of these atrocities and injustices are not unique to North America: in Indigenous territories occupied by the Burmese army, the rape of Indigenous women is viewed as both “entertainment” and part of a strategy to demoralize and weaken the Indigenous population; furthermore, Tauli-Corpuz wrote, in Fiji, India, Myanmar, Nepal, the Philippines, Thailand, and Timor-Leste, militarized conflict over Indigenous land has led to gang-rape, sexual enslavement, and the murder of Tribal women.

CS: How has the landscape for women and girls changed since your 2015 report?
Victoria Tauli-Corpuz: I know of Indigenous communities who have changed some of their inheritance laws to remove their discriminatory aspects against women; this has happened in my own community here in the Cordillera, Philippines, where women are equally given a chance to inherit land. Because of the conscious efforts of the Indigenous People’s movements to deal with discrimination against women, there have been a few changes. But I can’t say for certain [these have been] satisfactory. The changes are happening slowly, and because of the conscious efforts of Indigenous people and Indigenous women.

CS: Have the statistics of violence against Indigenous women improved?
Victoria Tauli-Corpuz: I cannot say for certain that it has improved because I still receive a lot of reports of sexual violence against Indigenous women. Very recently there was this case of two Indigenous women in Bangladesh who were raped, and when the Chakma queen went to help them, she herself was aggressively beaten by the military. I think violence because of discrimination has not really improved in regards to race. I have come from Canada where the cases of missing and murdered women is still a very prevalent issue. But I think that things have also been progressing in a way we would like.

CS: What do you believe is the catalyst for change?
Victoria Tauli-Corpuz: First of all, the States who have signed on to the Convention on the Elimination of Discrimination Against Women should put forth much more effort to ensure the rights of Indigenous women are respected and that this kind of violence doesn’t happen. In many cases I have seen, it is the police or military who are doing this violence against women. I think there needs to be a more conscious effort to stop violence because of gender discrimination and discrimination against Indigenous Peoples in general. There are many State policies that are still very discriminatory and the justice system is not available for Indigenous women to use when they become victims of violence. There has to be a lot of work done in terms of making the justice system more sensitive to issues of Indigenous women and Indigenous people as a whole.

CS: In the 2015 report, you named weaknesses in monitoring systems and implementation in relation to Indigenous women’s rights and a lack of disaggregated data regarding Indigenous women as key challenges for the global community. Do these continue to be key challenges?
Victoria Tauli-Corpuz: Yes, monitoring is still not at a satisfactory level. Even disaggregating data on Indigenous people as a whole is not really happening in some countries. Secondly, in some regions, like Africa and Asia, governments don’t even recognize the existence or identity of Indigenous Peoples; therefore, the monitoring of what is happening to them isn’t taking place. Thirdly, the statistical systems in most countries are not yet in the stage where they are able to disaggregate data based on ethnicity or gender. You can have data on the extent of violence against women in general, but not against Indigenous women in particular, which many say there aren’t the resources for that. But Indigenous women are being trained to monitor within their communities to see what the situation is for themselves and to influence their own local government to change things. It is happening under the sustainable development goals framework to push the government to monitor what is happening to them.

CS: What are some promising practices that have been implemented since your report?
Victoria Tauli-Corpuz: There are now some Indigenous women who are members of governmental women’s commissions. In the Philippines, they have the Philippines Commission on Women with members who are Indigenous women. There are [also] more reports being written on the situation of Indigenous women. For instance, I am getting good reports on how criminalization of Indigenous women is happening. That means that women who are resisting are filing criminal charges. Thirdly, there are many Indigenous organizations now that are undertaking their own programs and projects related to raising awareness on their rights, but also socio-economic projects that help them promote their own livelihoods and protect their [trades].