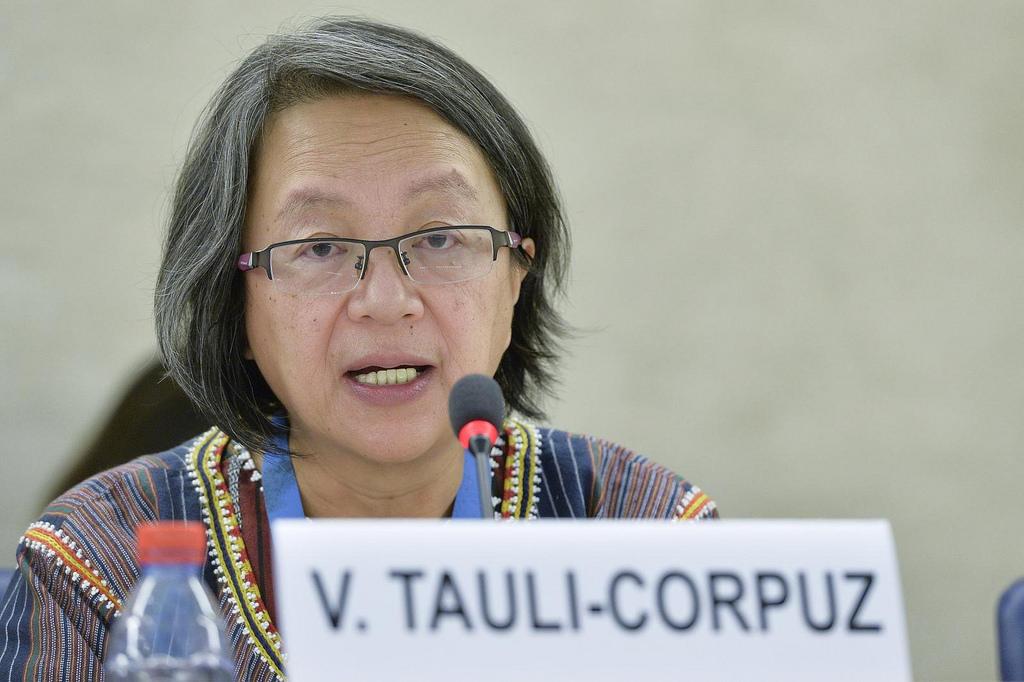 What do you do when a country places a United Nations Special Rapporteur on a terrorist hit list?

If you're the UN, you hit back.

A petition filed February 21 in a Manila court by apparently unstable President Rodrigo Duterte of the Philippines labels Victoria Tauli-Corpuz, UN Special Rapporteur on the Rights of Indigenous Peoples 'a terrorist.'

Human Rights Watch saw the petition this week and called it "a virtual hit list."

The legal petition accuses 600 people including Victoria Tauli-Corpuz  and Joan Carling, co-convener of the Indigenous Peoples Major Group on Sustainable Development, and several other Indigenous human rights defenders as being affiliated with “terrorist and outlawed organizations, associations and/or group of persons” connected to the Communist Party of the Philippines (CPP) and the New People’s Army (NPA).

Although Zeid bluntly stated the president of the Philippines "is in need of a psychiatric evaluation,” there are serious concerns for their safety.

Tauli-Corpuz, a member of the Kankanaey Igorot people in the Philippines, believes she was targeted for statements she made on December 27, 2017 to the Human Rights Council. The Council has entrusted her to provide reports of alleged violations of Indigenous people’s rights worldwide.

Tauli-Corpuz called the allegations, “baseless, malicious and irresponsible,” and added she was consulting with lawyers on legal courses of action to clear her name and make accountable "those who put my life and security at risk."

Human rights organizations have charged the Philippines army with harassing and killing the Indigenous Lumad people on Mindanao Island who have been caught in the middle of a communist insurgency. The terrorist list is the most recent move by the Philippines in a long conflict between defenders of Indigenous Peoples’ rights and the Duterte administration, the International Work Group for Indigenous Affairs (IWGIA) says.

“The Government of the Philippines regularly and increasingly threatens and harasses Indigenous Peoples," Julie Koch, executive director of IWGIA said in a statement. “We are extremely worried about finding some of our long-term partners on the list. We fear for their personal safety."

One of IWGIA's partners on the list is Cordillera Peoples Alliance, with co-founder Joan Carling and several other members named. Carling said she expects to take legal action, and as well expects the Philippine government to "ensure the physical safety of those of us who are listed in the petition, as called for by UN experts.”

The international human rights and Indigenous community is expressing solidarity with Tauli-Corpuz and Carling, while condemning the Philippine government.

"Vicky is an ardent advocate for Indigenous rights around the world, not a terrorist," Amazon Watch executive director Leila Salazar-López told Cultural Survival. She said the accusations against her were very worrisome. "We will stand with her as she has stood with Indigenous Peoples and land defenders for decades."

Patricia Gualinga, Kichwa women's leader from the community of Sarayaku, Ecuadorian Amazon told Cultural Survival, "I stand in solidarity with my sister Vicky.”

"When a woman is clear in her defense of women's and Indigenous Peoples' rights, authoritarian governments use their power to criminalize, threaten, and persecute us through the law, as has happened here in the Amazon," she said.

The growing list of those expressing solidarity with Tauli-Corpuz and Carling include the Cordillera Peoples Alliance, the Cultural Conservancy, the Seventh Generation Fund for Indigenous Peoples, Tero Mustonen of Snowchange in Finland, Tebtebba, Indigenous Climate Action Network, International Funders for Indigenous Peoples, Luisa Maffi of Terralingua, Tarcilla Rivera Zea and Jesús Fuentes as members of United Nations Permanent Forum on Indigenous Issues, and a growing list of others as they learn the news.

The Editorial Director at ČálliidLágádus - ForfatternesForlag said, "I am horrified that human rights defenders like UN Special Rrapporteur for Indigenous Peoples Human Rights are being targeted like this. Vicky is being accused for terrorism by Filipino authorities. This brave, warm-hearted, clear-spoken woman is a defender of humanity, no terrorist!"

Tauli-Corpuz is one of the Indigenous leaders who helped draft the Declaration on the Rights of Indigenous Peoples in 1993 and then lobbied for it for more than 20 years until the UN General Assembly finally adopted the treaty in 2007.

She has founded and managed various nonprofits that raise awareness about social ills, climate change, and the advancement of Indigenous Peoples’ and women’s rights. In 1996, she founded Tebtebba, an international organization that promotes Indigenous Peoples’ perspectives on key issues such as human rights, sustainable development, climate change, and the environment.

Related: Cultural Survival Stands in Solidarity with Victoria Tauli-Corpuz and Joan Carling in the Wake of Unfounded Terrorist Accusations

-- Terri Hansen is a member of the Winnebago Tribe. She has covered Indigenous Peoples’ issues since 1993. Hansen’s focus is science and the environment. She has reported on climate change in tribal communities since 2008, and on Indigenous participation in the annual UN climate summits since the COP15 in Copenhagen in 2009. Follow her on Twitter @TerriHansen.