Decolonization is frequently defined and discussed as the process by which subjugated territories put an end to their colony status. However, this limited definition falls short of expressing the full connotations of the concept. For Indigenous Peoples, decolonization includes the restoration of ancestral practices, the promotion and use of native languages, Indigenous sovereignty, the growing of food, reclamation of clothing, and recovery of practices and ways of seeing and understanding the world, among many others. Indigenous decolonization struggles and triumphs are happening in an effort to undo practices and ideologies imposed from the “encounter between two worlds” that resulted in the establishment of an unequal system for Indigenous Peoples of Abya Yala (Latin America).

This system of inequality disproportionately affects Indigenous women, who face severe racism, machismo, violence, and other effects of patriarchal culture. But, many women have initiated processes to counteract the colonization that relentlessly continues to affect them today. To shed light on these struggles, we spoke with several Indigenous youth from Guatemala, Honduras, and Mexico, who participated in a 15-session human rights training program supported by Cultural Survival in early 2021. The Indigenous Women for the Defense of their Human Rights Training sought to build the capacity of 24 Indigenous human rights defenders from Guatemala, Mexico, and Honduras, who are continuing to make changes in their communities by sharing their rights knowledge with other women. Their shared and unique experiences enabled us to understand that decolonization is not a homogeneous or linear process, but diverse and personal.

One of the starting points for decolonization is developing an awareness of being, analyzing the meaning of existence and life practices. Therefore, decolonization often begins from cultural practices and identity. GILDA MARICELA (Maya Kaqchikel), originally from San Juan Comalapa, Guatemala, explains that her decolonization process has prompted her to use her mother tongue, Kaqchikel, and wear her Mayan clothing, but also to incorporate and apply ancestral knowledge in her professional career as a psychologist.

Decolonizing also means “never ceasing to be,” as defined by BRENDA XITUMUL (Maya Achí) from Rabinal, Alta Verapaz, Guatemala, who remembers that when she was orphaned with her father, she remained close to her mother’s spirit by speaking their mother tongue and wearing their Mayan clothing. Even though she suffered discrimination while growing up, she has always felt proud of who she is, because “that’s how I grew up . . . I [would] think of the strength of my mother.” She names her mother as her main influence in resisting colonization.

Indigenous Peoples not only bravely face their painful past, but also reflect on their present to collectively build their future. CANDELARIA XÍ CHÉ (Maya Q’eqchi’) from Petén, Guatemala, says that it is important to transmit resistance practices and ancestral knowledge to future generations. Speaking one’s native language and losing the fear of wearing traditional clothing in public spaces is essential for resistance. MANUELA DAMIANA (Maya K’iche‘) originally from Nahualá, Sololá, Guatemala, adds that respect for the elderly is fundamental.

SILVIA JACINTO MENDOZA (Mixteca) from Ometepec Guerrero, Mexico, describes her experience of decolonization on a family level: “We have tried to maintain our mother tongue, we live together as a Mixtec family does, we eat our traditional food, we dress like Mixtecos, and we have our Mixtec stories.” For MARÍA DE LOS ÁNGELES GONZÁLEZ RAMOS (Purépecha) from Comachuén, Michoacán, Mexico, the process of decolonization has taken place strongly at the community level: “It has been something collective, to participate in community decision-making, trusting in my community authorities, and above all, asserting our right to self-determination and autonomy as a whole,” she says, adding that part of decolonizing is reclaiming those spaces that are denied to them because they are women.

Decolonization requires the deconstruction of imposed sexist systems. ANGIE MILADY LÓPEZ (Lenca), who lives in Honduras, says that “she has learned to unlearn” by taking up space in the face of sexist practices, debating with the women in her circle, and sharing her knowledge with other women so that they know their identity and history. For DAMIANA TZAJ (Maya K’iche’), learning to be independent, demanding equality between men and women, claiming the right of citizen participation, and giving value to the participation and opinions of women is essential to overcome colonialist patriarchal domination.

CATARINA AJTZALAM (Maya K’iche’) originally from Nahualá, Sololá, Guatemala, has formed her point of view based on painful experiences that she overcame. Her grandparents were colonized with sexist practices and therefore doubted her abilities, and so, she believes that decolonization is also based on participation in public spaces and decision-making. For Ajtzalam, this process is also expressed through the level of consciousness of a community that wants to transform oppressive and violent relationships.

Another form of decolonization is approached by challenging the power structures in the traditional educational system. That is what ROSEMARY DIONICIO (Maya K’iche’), originally from Uspantán, Quiché, Guatemala, wants to confront. Her desire to decolonize inspired her to study intercultural bilingual education to promote and appropriate her Indigenous language. For Dionicio, it is vital to dare to revolutionize, debunk stereotypes about Indigenous Peoples, and become an active political participant. She dreams of being able to implement processes of decolonization in childhood through education and from the communities. One of the consequences of colonial education is an embedded fear and contempt for anything Indigenous. Xí Ché affirms: “Being an educator, I have noticed that it is the parents who sometimes do not like that their children learn and speak in their own languages.” 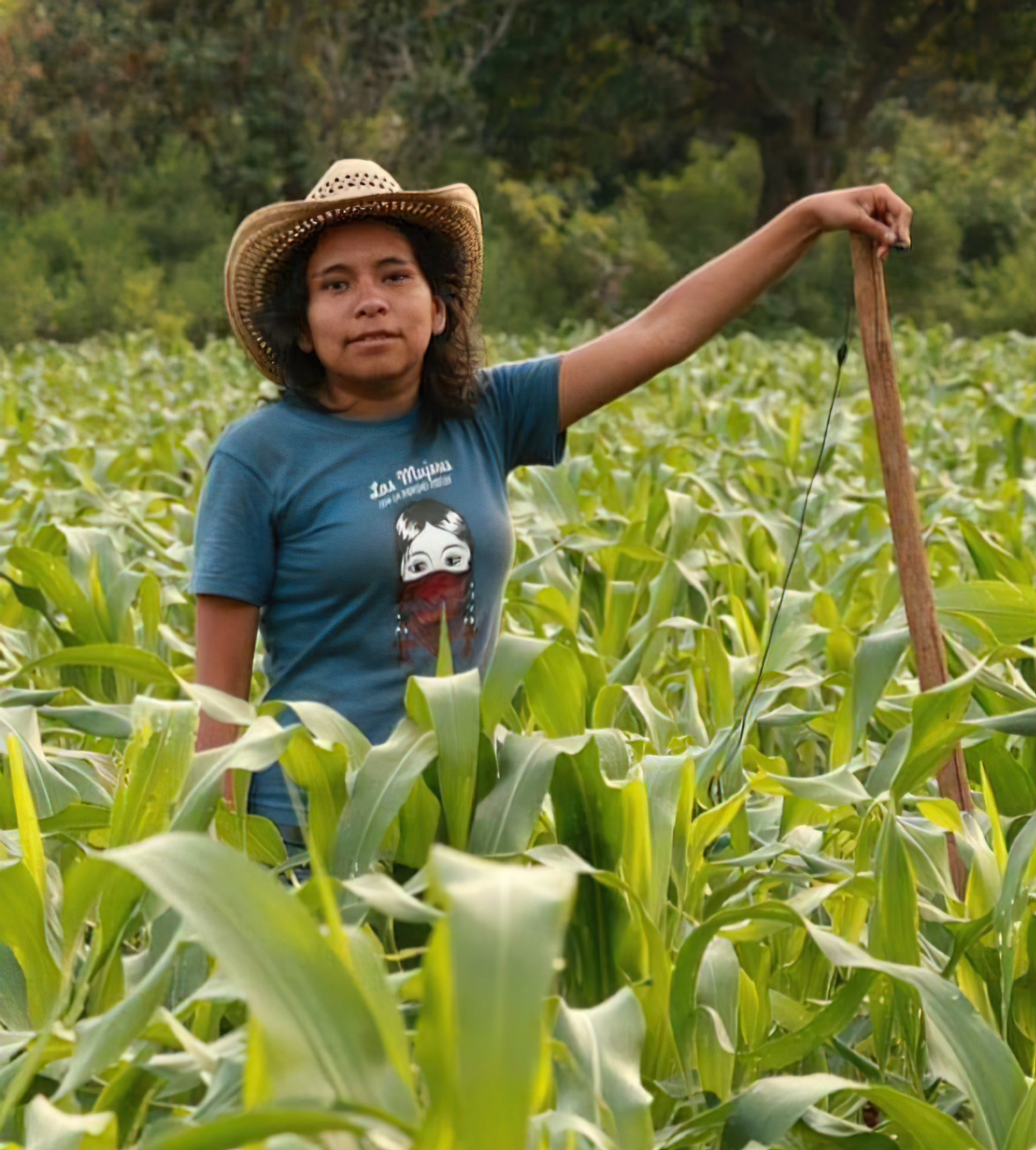 Another participant of the human rights training, ANGELICA AYALA (Nahua), is originally from Tepoztlán Morelos, Mexico. She is a human rights activist and a youth land defender. When she was a child, she saw how her community rose up against the construction of a golf club that was not endorsed by the people, and there she understood the importance of defending its territory and organizing to protect its resources. Ayala believes that resistance is key to preserving the present and future and explains how decolonization begins through organization. When young people get involved in communal festivals and then participate in mayordomías (neighborhood assemblies), they pay more attention to ancestral practices, understanding the process of the cornfield and the ceremonies for harvesting in addition to valuing the hills and sacred spaces, the water, and the rainy season. She says, “With imposed projects such as the installation of gas pipelines, aqueducts, thermoelectric plants, and construction of highways, it is necessary to maintain and strengthen the social fabric, transmit to the new generations the reasons why they fight, and say, ‘Here we are.’ They cannot continue doing what they do; we continue to exist, resisting. We do not leave or give up. We ask for respect and that our ways of life and territory be respected.” 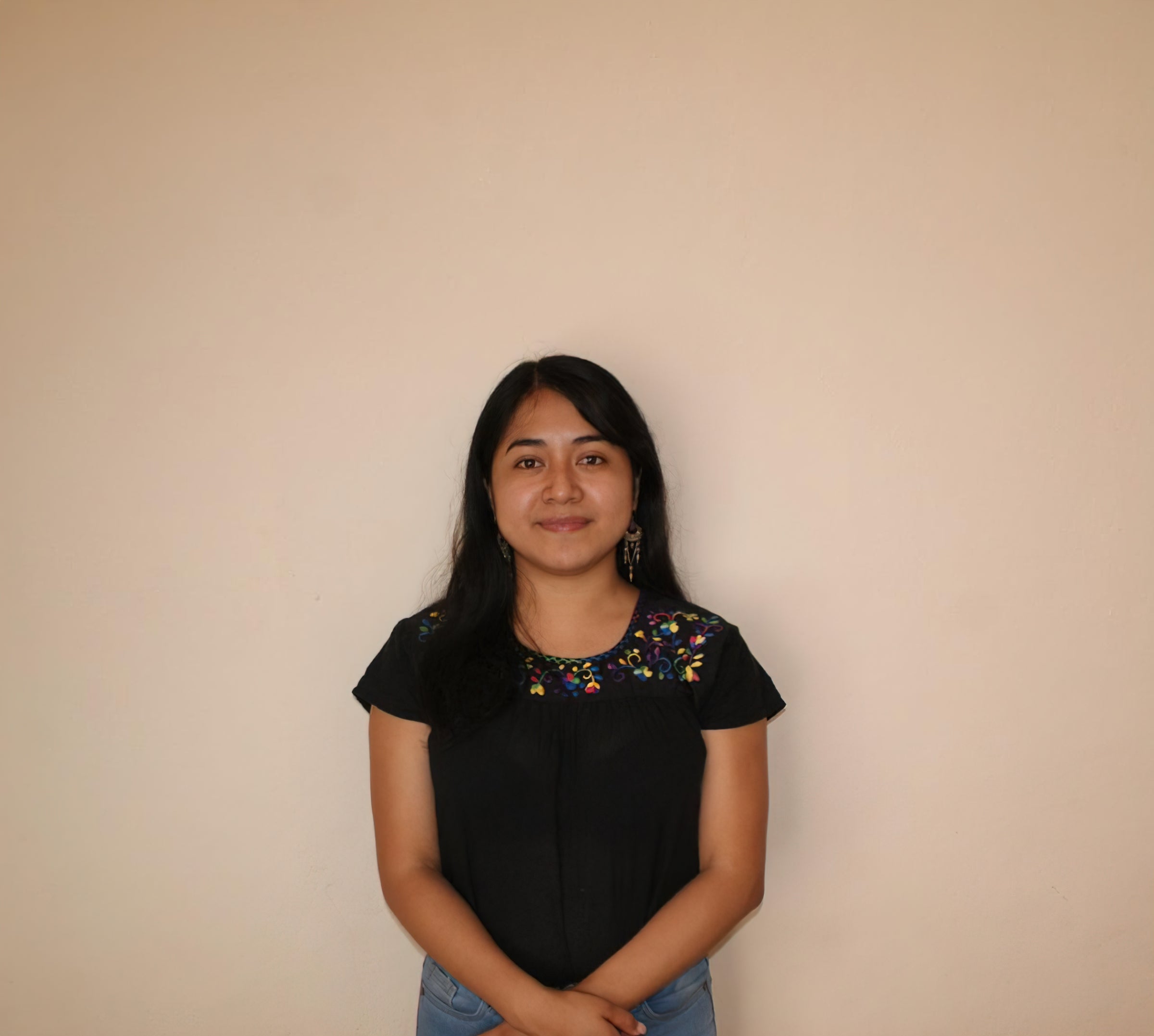 BETY PICHE (Zapoteca), originally from Oaxaca, Mexico, says that she fights against the homogenizing policies of the colonial educational system, questioning the Spanish language that it wants to impose as the communication system among Indigenous Peoples. For Piche, resistance to Western thinking is necessary if we want to preserve the heritage of our ancestors. She has been appropriating her mother tongue together with the Intercultural Youth Collective Our Voices, made up of young Indigenous migrants, who, for different reasons, have come to live in Mexico City. “The continuity of the decolonization processes is linked to information; once we start the decolonization process, we cannot stop,” she says. Piche also believes that in order to continue resisting, it is important that Indigenous Peoples are informed and seek their own means to communicate. Preserving a language is not only an element of cultural resistance, but also an important means for communication between Peoples and political activism. 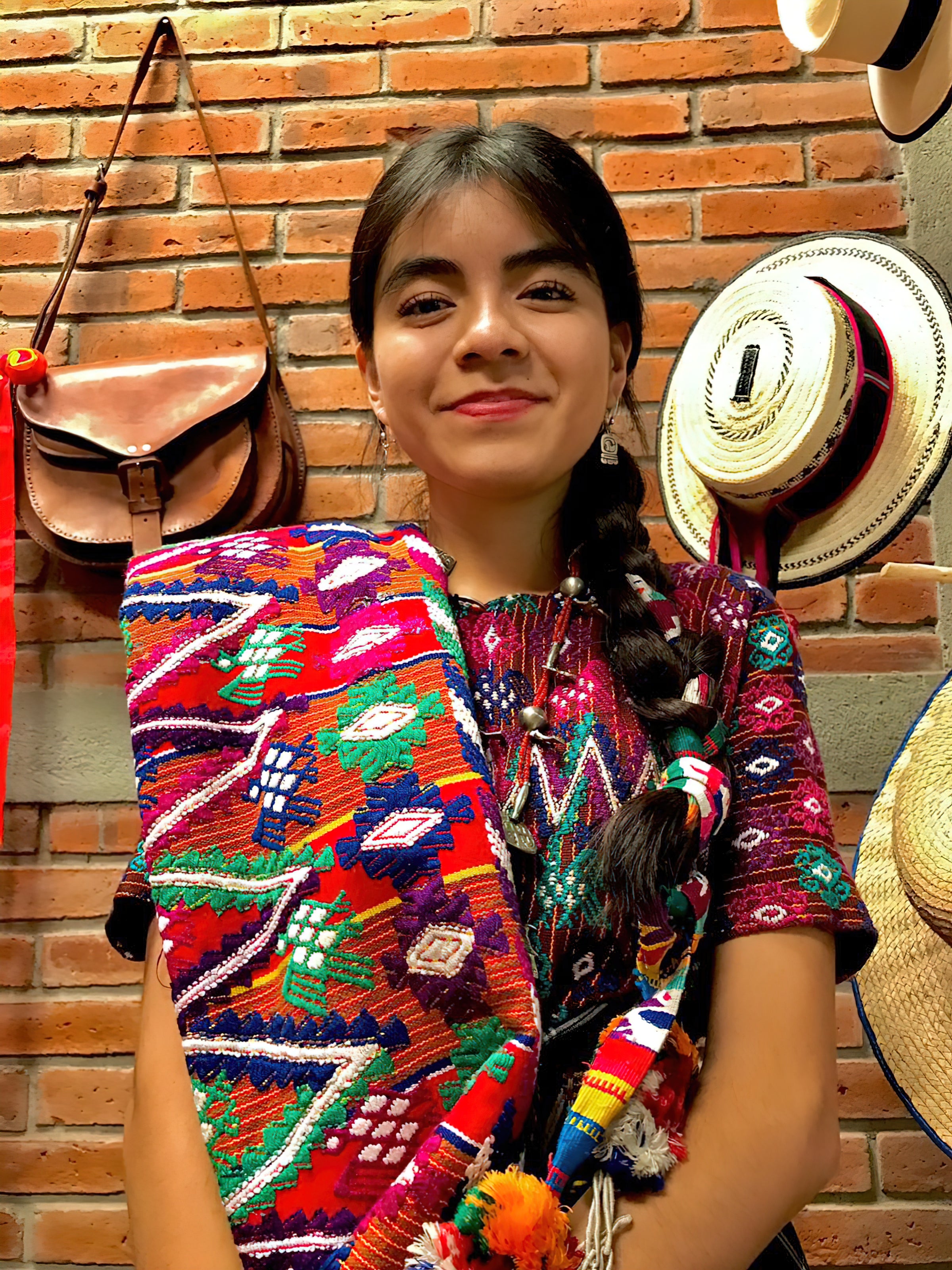 MACTZIL CAMEY (Maya Kaqchikel), from Chimaltenango, Guatemala, believes that resistance can also be expressed from knowledge. Communities and the oral languages of our ancestors keep the seeds, tissues, and memory of the Peoples alive. Camey says that in her experience, it has been vital to question what is imposed as an absolute truth. She adds that on a personal level, it has been very important to turn from individualism to a more collective sense of community. In her opinion, the struggle to claim the appropriation of her Indigenous identity is represented by the use of her mother tongue, wearing her clothing, and using her own food systems. Together with her family, she has found ways to continue the decolonization process. 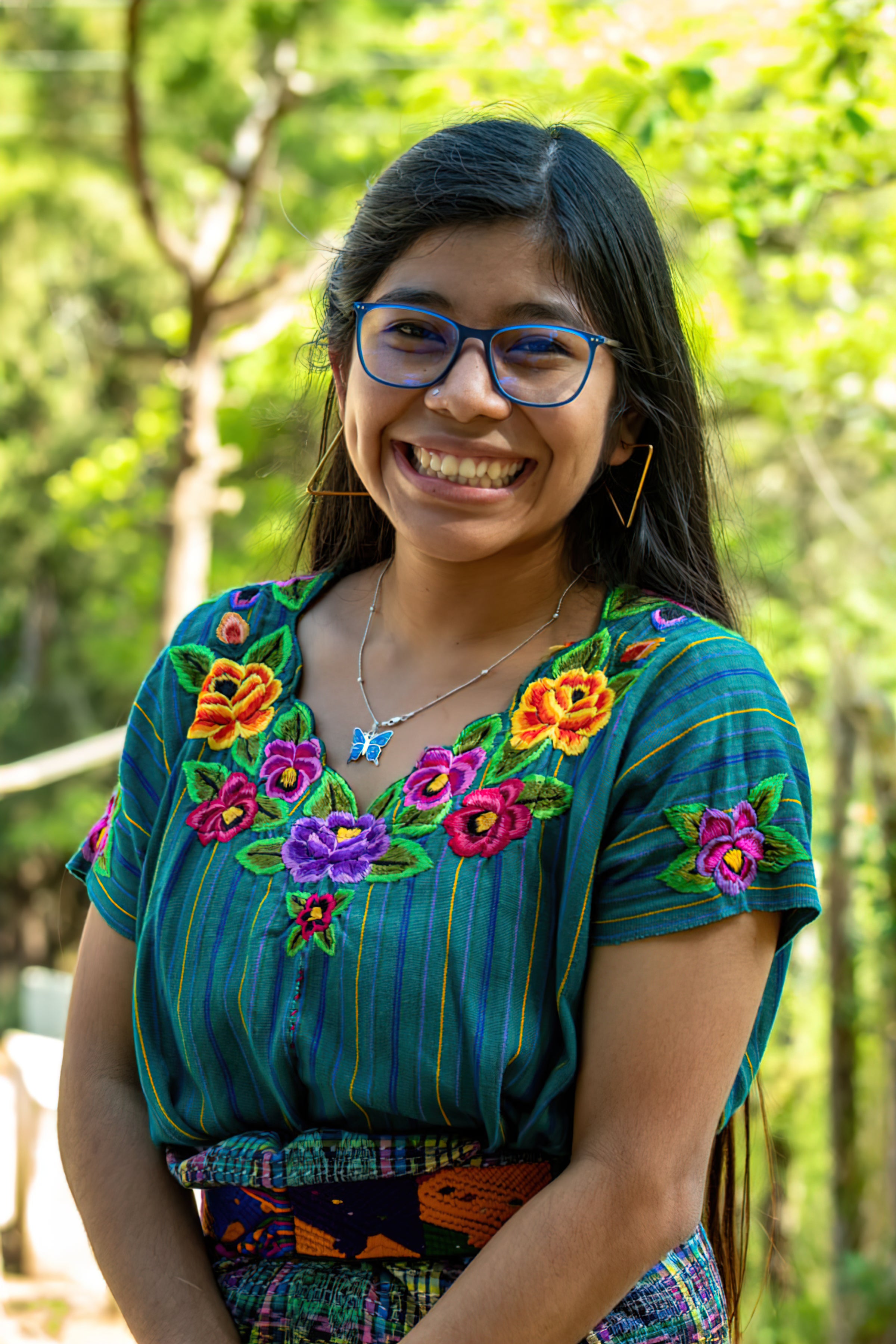 SUCELY PULUC (Maya K’iche’), from Guatemala, is convinced that activism is key to decolonization. Her work has transformed her into a political activist who questions and denounces the dominant vision of the world. Through this questioning, she has opened her mind to the oral narration of her grandparents, learning to value medicinal plants, the cultivation of the land, and the production of her own food. In her decolonization process, Puluc recognizes both the strength of other women in her genealogical line, as well as other Maya women who have contributed to her life. She appreciates the possibility of weaving paths with other women, and exhorts Indigenous women to take the spaces that have been denied them and appropriate them to build their lives from their realities and stories. 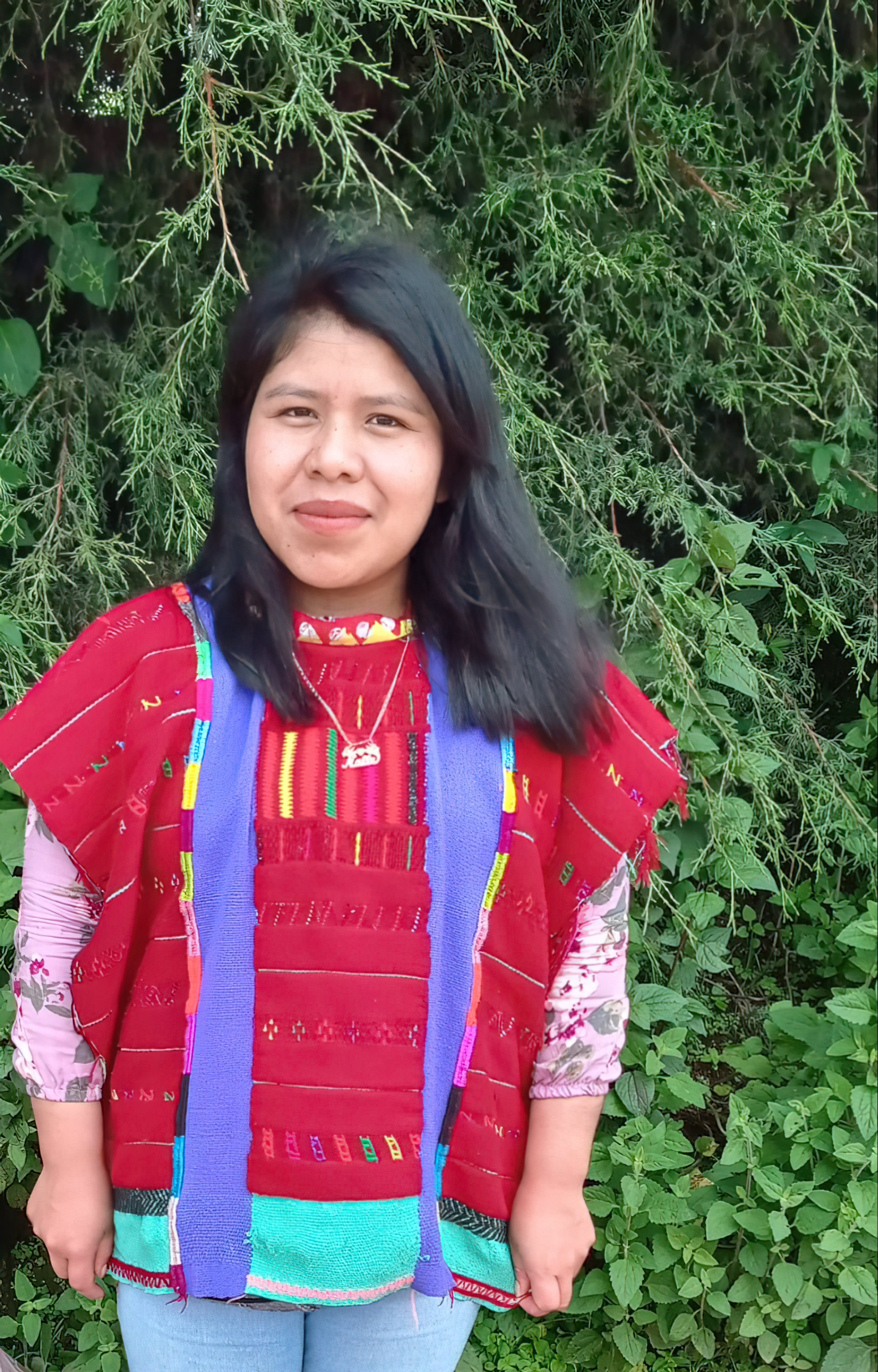 NAYELLI LÓPEZ REYES (Triqui) from San Martín Itunyoso, Oaxaca, Mexico, says that in order to decolonize, we must avoid new forms of theft from Indigenous Peoples and take care of intellectual property through community organization. “In my town, we don’t let them take pictures of us to profit from us or steal our culture. We are cautious with those who visit our community, as there are those who have other intentions. We are not violent, but we take care of ourselves as a result of other experiences we have had. The government and the people of the city tend to think that we are less, because of the way we speak, walk, think...because we live our culture. However, to be firm with our ideas, beliefs, and ways of life is to resist colonization.” 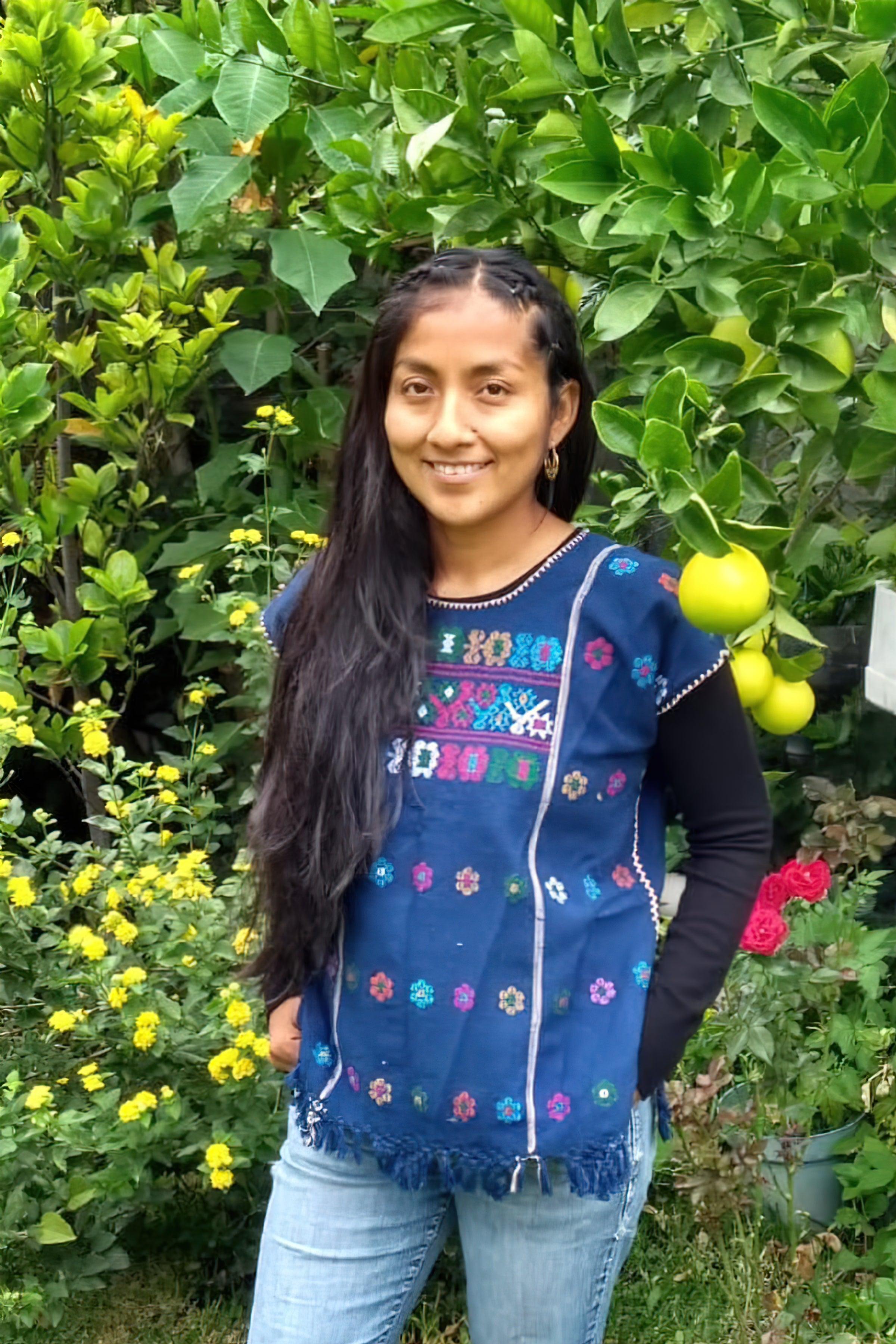 For GRACIELA LÓPEZ  (Amuzga) from Xochistlahuaca, Guerrero, Mexico, the decision to decolonize is made at the moment when simply “being” is questioned. There, a feeling arises of returning to one’s roots and seeking “that warm embrace of the community.” López experienced a great deal of violence, racism, and discrimination in her life and remembers that she stopped speaking the Amuzgo language when she moved to a city where there were more white people than Indigenous People. She says that although she denied her culture in words, her body and thought told her that she was part of an Indigenous People.

Longing to connect with her roots and identity, when the opportunity to study at an Indigenous-minded university was presented to her, she did not hesitate to do so. She used education as a tool to strongly initiate her decolonization process, opening her heart to her own history and fighting for the defense of the territory against wind and mining projects that, she says, “tear the Earth into pieces, but also the Peoples. To decolonize it is important to seek rebellion, rethink control over our bodies and ideas, and stop trying to be like Western women; ceasing to run at their rhythms, fashions, and criteria, [instead] building our own thinking, recovering our life practices, and being part of the community organization. We need to feel proud to see our brown skin, our beautiful Indigenous faces.”