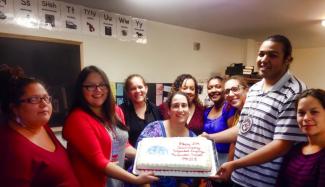 Summer Turtle Program youth, ranging in age from 5-12, swarm around reporter Sally Mairs as soon as she reveals her handheld microphone and shiny recorder. Mairs has just arrived at Maushop Farm in Mashpee, Massachusetts to visit with staff and students at the annual day camp hosted by the Wôpanâak Language Reclamation Project for three weeks each summer. “Who can introduce themselves in their language for me?” she asks from the midst of the crush of a dozen children surrounding her. Paul raises his hand quickly. “Nutus8ees, that’s how you say ‘my name is.’ So, Nutus8ees Paul,” he says proudly.

Three dozen youth from the Asonnet Band of Wampanoag, the Aquinnah Wampanoag Tribe, the Herring Pond Wampanoag Tribe, and the Mashpee Wampanoag Tribe gather daily at the farm to learn simple phrases, basic vocabulary for counting, clothing, kinship terms, as well as intertribal protocol, such as how to express their tribal affiliation, how to make prayer offerings, how to use more formal language for ceremonial occasions, and how to work together to smudge one another with cedar or sage smoke and eagle feathers to purify hearts and minds. They begin each day speaking Wôpanâôt8âôk.

The Summer Turtle Program provides youth with language, cultural lessons, and activities both ancient and modern: sea fishing, relays, an obstacle course, and miniature diorama construction projects featuring weety8s, traditional Wôpanâak summer homes covered in woven reed mats. During the last week of the program, following morning lessons on traditional Wôpanâak crops and how corn came to the People via the crow, students watch continental trade networks unfurl across large maps of the Americas and eagerly raise their hands to make guesses about the origins of the plethora of modern food staples emerging from ancient agricultural practices indigenous to the Americas (sweet potatoes, potatoes, tomatoes, popcorn, wild rice, blueberries, and strawberries, to name a few). Then they team up to write and perform puppet shows enacting their own imaginative versions of how traditional crops came to be. An eager and fidgety queue forms next to the theater, while those who’ve concluded their masterpieces lounge in the pine needles—satisfied with their performances, or strategizing how to sharpen their story for best dramatic impact during their final shows for parents and the community.

A shell fishing expedition precedes the final day of Summer Turtle Program so that students can help feed their families and elected tribal leaders, who gather for a festive clambake orchestrated by the Tribal Natural Resources Department staff. The mood is celebratory as students line up by age to sing Wôpanâôt8âôk songs, though there are tears of devastation behind the puppet theater because of the limited number of performances that can be showcased for the crowd. Vice Chairwoman of the Mashpee Wampanoag Tribe and language project co-founder and senior linguist Jessie little doe Baird presents certificates of appreciation to the six teachers, tribal staffers, and volunteers who planned, funded, and fed the program for the duration. She beams at the crowd, proud of her mentees’ language abilities and the enthusiasm they’ve engendered in tribal youth for their language and culture. “These teachers are preparing for our school. These ladies, and Brian, are wonderful!” she exclaims. “Our communities need this immersion school, because we see all over Indian Country that language and language immersion programs inoculate children against social challenges like addiction and dropping out. It’s important our youth understand their role as future leaders and knowledge keepers for our Wampanoag Nation.”

Summer Turtle is a proving ground for the teachers: tribal children and students from Cape Cod and the islands will soon have a language school of their own, with nearly all classes taught in their native language. Beginning in August 2015, the language project plans to launch a year-round school for Kindergarten and Grade 1 students, once its public charter school application is approved by the state. Founding trustees for the school have convened for the past year and a half to shape the vision, mission, and policies for the new institution, and to mobilize the expertise and funding to establish two initial immersion classrooms. They plan to serve students through Grade 6 by the 2021–2022 academic year.

As recently as 1993, there were no native speakers of Wôpanâôt8âôk; Wampanoag children on Cape Cod and Martha’s Vineyard grew up with little knowledge of their mother tongue. Existing for more than a century in written records, embedded on the Massachusetts landscape, in the state’s name, and countless street signs and place names, Wôpanâôt8âôk reemerged as a spoken language in tribal households and community-based language in the mid-1990s. Following the guidance of her ancestors, which came to her in dreams, little doe earned a research fellowship and master’s degree in Algonquian linguistics from MIT in 2000, while teaching fellow community members to speak, play games, write, and pray in Wôpanâôt8âôk. Her two decades of mentoring and teaching have yielded a fellow MIT-credentialed linguist and future school principal, Nitana Hicks, as well as a dedicated group of language apprentices who meet daily in a workplace provided by the Mashpee Wampanoag Tribe. They spend 9–12 hours a week in language immersion sessions— no written or spoken English allowed—and are tasked with creating an entire K-3 curriculum framework and thousands of daily lesson plans grounded in Wampanoag cultural values while adhering to Massachusetts’ newly adopted Common Core Standards. Only English Language Arts content will be taught in English, with the majority of the school day unfolding in carefully planned Wôpanâôt8âôk lessons and activities.

The language immersion movement is growing nationwide, and not just in Indian Country where more than 50 Indigenous language schools and programs strive to carry forward their languages in the living vessels of youthful minds. Team members have visited immersion schools of the Ojibwe in Hayward, Wisconsin and the Mohawk in Akwesasne, New York, and have also toured schools in Massachusetts’ growing network of more than 80 charter schools— some offering English/Spanish bilingual instruction or Mandarin immersion. The teacher trainees also lead community language classes year-round in Mashpee, New Bedford, Plymouth, and other locales with concentrations of Wampanoag households. They receive weekly grammar lessons from the team’s two linguists, and learn how to work with the 11,000-word dictionary generated by nearly two decades of research by little doe and other MIT-based Algonquian linguists. With no elder fluent speakers to turn to for translations or neologisms, terms must be carefully researched or based on parallel items in sister languages. Corresponding changes and precise descriptions with respect to Wôpanâak cosmology are considered and discussed as a group before a decision is made.

In addition to the founding trustees for the charter school, the team is guided by the language project’s intertribal board of directors, who meet monthly to set project policy and review funding opportunities and translation and partnership requests. “Sometimes I ask myself, ‘who am I to make these words, to lead this culturally-based framework?’” says Hicks, curriculum manager for the team. “You’re the best at this. All of you. We believe in you. Continue to call on your People for guidance,” Jason Baird, Aquinnah Tribal Medicine Man, responds. The project’s board of directors, language students, and staff are seated in a circle of chairs in the Bourne Public Library on a Sunday morning for the monthly committee meeting. Heads nod in a chorus.