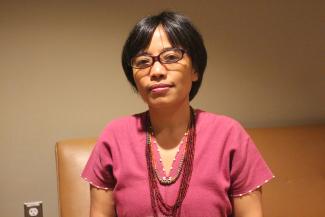 In 2017, Rukka Sombolinggi (Toraja) from central Sulawesi, Indonesia was elected the first woman secretary general of the Indigenous Peoples’ Alliance of Indonesian Archipelago (AMAN). Before joining AMAN in 1999, Sombolinggi worked for JAPHAMA, a network of Indigenous Peoples’ defenders—one of the main groups that convened the first congress of Indigenous Peoples in Indonesia during which AMAN was established. Also a filmmaker, she produced Standing Strong On the Tsunami Ruins in 2005, a documentary about Indigenous communities affected by the tsunami in Aceh. She continues to fight for Indigenous women’s voices to be included in multiple spheres of community. Sombolinggi spoke with Cultural Survival’s Dev Kumar Sunuwar at this year’s United Nations Permanent Forum on Indigenous Issues.

Cultural Survival: Could you tell us about your work with AMAN?

Rukka Sombolinggi: AMAN was established in 1999, shortly after the Suharto regime fell. But the movement in Indonesia started much earlier, in the ‘70s, ‘80s, and ’90s. As of today, our members are 2,366 Indigenous communities. They are served by one headquarter in Jakarta, where I am. We have 21 provincial chapters and 120 local chapters working to serve our members in matters of discrimination.

CS: What is it like to be the first woman leader? What are the challenges hindering women from gaining positions of leadership?

Rukka: Being an Indigenous woman and single is unconventional. Sometimes people will ask, “do you have kids?” or “where does your husband come from?” There’s an advantage because I don’t have that domestic partnership commitment that can weigh people down. I have more freedom to work, to commit myself fully for AMAN’s members.

In general, Indigenous women in many different parts of the world, including Indonesia especially, face multiple discriminations. As girls, at home, in the family, and in the community, we are always treated like second-class citizens. The most challenging role for a woman is as an Indigenous woman, because when Indigenous Peoples’ communities face problems, women and children will suffer the most. Because of our domestic roles, as a caregiver of the family, of the community, it puts so much additional burden on women. At the economic level, the position of Indigenous women as caregivers, that’s their political position. It gives them meaning. But once your land is taken away, the status as caregiver . . . then you lose that.

Indigenous women are the keepers of traditional knowledge, in seeds, in medicines; that gives a special role to Indigenous women, they are respected because of that role. But when land and resources are taken away, they cannot make medicines anymore. They immediately become completely powerless, and that’s where they have to go out and become workers. They still have to perform domestically as a caregiver, but they have to also work on the plantations, and then everything is measured by how much money you get from the company. It’s always the women who will suffer the most.

CS: You have been involved in the Indigenous Peoples’ movement for so long, and now you are taking a position of leadership. What has been your experience bringing women into leadership positions?

Rukka: We need to narrow the gaps starting at the community level, and also at the organizational level. At the organizational level, we have protocols and procedures to ensure women will get into those positions. If we hire for a post, for example, women will not get it [without] affirmative action. As organizations we have the privilege to have the protocols to pay attention to the specific needs of women. How do they get additional capacity-building in terms of awareness raising? This is very important because as women coming from Indigenous communities, at some point you already have the mindset that you are lower than men; you are in the inferior position. There’s a feeling of inferiority that a man doesn’t have. It’s our cultural background that a woman, no matter how good she is, always thinks that she can’t afford or that she doesn’t deserve. These are the things at the underlying emotional level (self-esteem, confidence) that we have to address first, and not many of the leaders in organizations have that understanding.

At the community level, it is much more intriguing because it is repeated discrimination: How women are perceived, that all women just have to be working on the field, making decisions . . . you just have to stay at home looking after your children and cook . . . you know nothing when it comes to decision making, when it comes to the political affairs or anything, which is not true. We need to find different strategies in different communities. In some communities it is easy to bring out women. In others, you really need to work with the elders, the male figures, the leaders in the community. You work with them, and you assure that inclusion of Indigenous women will benefit not just women but also the men, and the whole community as a whole—that’s the strategy. It’s much more of an art when it comes to Indigenous communities. But as organizations, we can actually do it. We can identify the problems, we can issue an organizational policy. As long as you enjoy the dynamic of being patient . . . we don’t push just for the sake of having a woman’s presence, but we make sure that there is no additional burden on women. Because sometimes when they go home after a meeting, they will get the intimidation or they will be mocked. Like, now your friend has gone back to Jakarta, now you go back to your corner.

We are Indigenous Peoples, but we are just like other societies. We are dynamic. We are open to improvement. We cannot use the few remaining examples of matriarchal communities to justify the still-existing, extensive discrimination against women. What we can do is use them as examples of places where women play important roles and the situation of the community is much better. We use these cases to encourage other Indigenous community to improve. It’s definitely different the way they will see you as a leader if you are woman or if you are man. As women, we need to prove more and more, to do things better to get their recognition. You have to really be assertive, especially in building authority. Because authority is not given, it is built. We build authority by sowing examples, by working harder than men, by constantly reminding ourselves that we have a responsibility to become role models for other women.