We Are a Riverine People: The Penobscot Nation of Maine 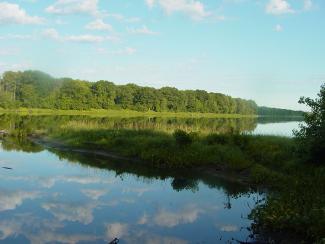 In 1980, the Penobscot Nation entered into an agreement with the United States and the state of Maine to settle claims to millions of acres of their Aboriginal territory. After years of paternalistic control by the state, the members of the Penobscot Nation believed they were entering into a new era of cooperation. However, the parties’ differing interpretations of the Maine Indian Claims Settlement Act have been a source of continual conflict. Now the Penobscot people have been compelled to fight to maintain their connection to the river that is central to their culture and identity.

In August 2012, Maine’s Attorney General issued an opinion to the Maine Commissioner of Inland Fisheries and Wildlife and the Colonel of the Maine Warden Service stating his view that, pursuant to the terms of the Settlement Act, the Penobscot Nation’s reservation is confined to the islands and that Maine has exclusive authority to regulate all activities occurring on the Penobscot River. On the same day he wrote a letter to Penobscot Chief Kirk Francis enclosing his opinion and asking the Chief to tell him whether he agreed with it. The Attorney General explained that if Chief Francis did not agree, legal action should commence.

The Settlement Act confirmed the right of tribal members to take fish for their sustenance from the Penobscot Indian Reservation. Until 2012 there had never been any dispute that this means the right to take fish from the Penobscot River, from Indian Island northward. Penobscot tribal members have relied upon the river for subsistence fishing, hunting, and trapping for hundreds of years; no white person dealing with the tribe has ever questioned that those rights are a part of the Penobscot Indian Reservation until now. Indeed, the Settlement Act leaves these subsistence practices subject to exclusive regulation by the Nation, free from all state regulation unless they affect fish or wildlife stocks outside of the tribe’s lands and waters.

Threatened by the Attorney General’s stance, the Penobscot Nation filed a lawsuit in federal district court against the Maine Attorney General, the Commissioner of the Maine Department of Inland Fisheries and Wildlife, and the Colonel of the Maine Warden Service to prevent them from taking action to threaten the tribe’s rights and authorities in the river. The lawsuit aims to obtain confirmation of the Penobscots’ inherent rights, stating that “The nation’s jurisdiction over sustenance fishing by its members in the Penobscot River is an exercise of its inherent sovereign authority, as a matter of federal law, and it remained intact; it has never been surrendered by treaty or by an act of Congress.”

The United States Department of Justice filed a motion to intervene in the case in August 2013, which was granted in February 2014. The Justice Department has an obligation to ensure the respect of tribal reservation boundaries and ensure “that the Nation can fully exercise its sovereign powers within those borders without improper interference from the State and others.” Eighteen municipalities and businesses that possess state permits to dump waste into the Penobscot River are also participating in the lawsuit, fearing that the Penobscots will try to limit their dumping if the tribe’s authority over the river is confirmed. The coalition hopes for a court ruling that the Penobscot reservation does not include any portion of the river, citing the Maine Indian Claims Settlement Act. Mark Chavaree has served as the Penobscot Nation’s staff attorney for 24 years and offers his thoughts on the tribe’s ongoing battle with the state of Maine in a phone interview with Cultural Survival:

“The state has been reluctant to recognize tribal rights. The system that Native people live under in this country isn’t one that we created, it was imposed on us, and under that system we have had rights withdrawn from us. But ultimately, the rights we do exercise are our inherent rights as a government and as an Indian tribe. Those rights weren’t given to us by the United States or the state of Maine; they exist by virtue of our inherent authority as a people, as a government that existed prior to this country ever coming into being and prior to any European landing on this continent. Those rights have always been ours. Over time, under this system of United States law, certain powers have been stripped from the tribes by our inclusion within this country, but elements of our inherent authority remain intact and must be respected. The Settlement Act was a recognition that we had the right to continue to practice our culture as a riverine people. Part of that culture is that we take our sustenance from the river and its resources, as well as the lands which form our Aboriginal territory.

“The river and the surrounding land are the area that we have lived in for thousands of years. Fishing has always been central to our culture. It’s central to our survival as a tribe. Some say the river is not part of your reservation, so then the obvious question is, where does our sustenance fishing right exist? It certainly can’t exist on land. Why would we agree to a fishery that was not part of the area that we’ve always taken fish from? This is the crux of the case: we are riverine people and the river and its resources are central to who we are. The tribe and the river share a name. It’s so central to who we are. And for anyone to claim that we have no rights in the river is just another attempt at terminating us as a tribe. We are in a struggle for survival. I can’t help thinking that the Wabanaki, the Penobscot, we’re an endangered species. We are continuing a way of life that was passed onto us by our ancestors and that hopefully we can pass on to our descendants, and we have a responsibility to preserve that the best we can.

“Economically we are behind a lot of other citizens in this country and in this state. So part of our survival is obviously to provide for ourselves, and the opportunities under which we’re able to provide for ourselves and our dependents have changed; the river and its resources present opportunities for us to do that. It’s not just the fish—we take the aquatic animals, we take certain plants that exist within the river system not only for sustenance but also for medicinal purposes, so our tie to the river is central to our existence not only as a culture but economically. There are people that act as guides on the river. We live within the river. It was our highway, it was our grocery store, it provided for all of our needs. So for anyone to argue that our reservation does not include the river makes no sense.

“We’re advocating for the government to recognize our rights, just like other citizens do when they feel like their right of free speech, or their right to bear arms...when they’re advocating for those rights, that’s what the tribes are doing. We’re advocating for rights that are recognized by the US government. It’s not special privileges...[it’s] self-governance. It’s really about who gets to make decisions about governance, about how we choose our leaders, our form of government, how we utilize our land, how we develop regulatory systems and law enforcement within our communities, who decides the rules around the taking of fish and wildlife.

“Sovereignty, or self-governance, is a responsibility. It’s not just something that you do; there is a responsibility to do it in a way that respects our culture and how our people want to live their lives and the worldview that we live in. So if we don’t have the authority, if it’s taken away from us, then obviously we lose the ability to protect our communities, protect our people, and ultimately our unique culture. And before you know it, we are no longer Penobscot.”