Through Our Eyes: An Indigenous View of Mashapaug Pond 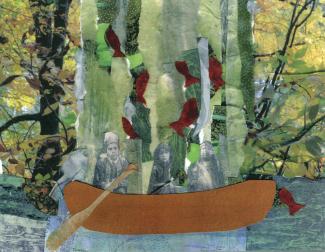 Through Our Eyes: An Indigenous View of Mashapaug Pond is the culmination of a yearlong project between Rhode Island’s Narragansett community and artist Holly Ewald, founder of the Urban Pond Procession. This book of environmentally-themed collage art presents Indigenous perspectives on the history of the
Mashapaug Pond, the last remaining natural freshwater body in Providence, Rhode Island. Beginning with pre-European contact, the collages progress through colonial times to the industrial era to the effects of modern urban storm water runoff, up to the Urban Pond Procession’s current efforts to encourage community stewardship of the ponds in the lower Pawtuxent watershed.

The collages utilize a fusion of poetry (in English and Narragansett Algonquin), interviews, photography, and a variety of textural media to portray an era when the Narragansett community’s use of the pond was vital for their physical and psycho-spiritual survival. At one time the pond provided opportunities for young children to learn to fish, swim, and navigate canoes. Now, however, due to surface water runoff and more than a century of industrial pollution, the waters of the Mashapaug Pond no longer support the life of the community. Reflections on the changing nature of the pond and the Narragansetts’ relationship to it are expressedthrough the memories of elders and the imagination of youth.

Because the names and ages of collaborators are not included with the collages, a scan of the contributors’ biographies in the appendix will yield some pleasant surprises. A photo collage by co-editor Dawn Dove offers one of the book’s most striking images: three black and white photographs of Narragansetts dressed in traditional clothing posed in a canoe constructed of paper. In one photo, a young boy wears a headdress and an embroidered jacket; his white shirt and dark tie emphasize the transition from traditional to westernized clothing styles. The young girl in the center of the canoe wears a long dress with a shawl draped around her neck and shoulders. And in the third image, an adult woman, perhaps the mother, wears a headband with a sash across her dress. The three figures have serious countenances, but the center background of tissue paper trees and shrubbery in subtle shades creates a dreamy, peaceful atmosphere. The collage is
bordered by color photographs of brilliantly colored fall foliage and bright red fish that jump out of the pond to heights above the canoe passengers; the blue water beneath the canoe is in fact a map. A “real” modern environment, an imagined nature scene, and a Narragansett family from a past era come together in a boldly textured image that is hauntingly beautiful.

Among other standouts is a textured collage by 10-year old Laurel Spears, who constructed her piece with overlapping scraps of material including a silk-screened scene of deer on pale blue cloth with a foreground image of a wigwam. Narragansett elder and 93-year-old family matriarch, Eleanor Spears
Dove, composed a text reflective of seasonal family life around the pond during the time when the Narragansetts lived in longhouses and depended on hunting, fishing, and gathering for survival. Spears and Spears Dove, great granddaughter and great grandmother, represent two of the four generations of women (along with Dawn Dove, grandmother, and Loren Spears, mother) who collaborated with other family and tribal members on many of the visual images and accompanying text featured in the book. A series of lines in one such collaborative poem offers a poignant reflection of the tribe’s revitalization,which culminated in the April 1983 recognition of the Narragansetts as a federally recognized tribe, a sovereign nation:

We are clay, we can remold
ourselves – our image
of who we are.

— Phoebe Farris, Ph.D. (Powhatan-Renape) is contributing arts editor for the CSQ. She is a professor emerita of Purdue University and the vice president for membership of the Washington D.C. branch of American Association of University Women.