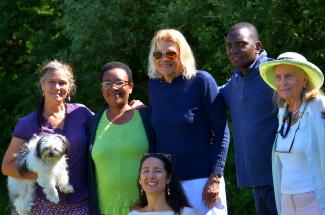 Reflecting on the past year at Cultural Survival, I am grateful for the success we have experienced in our programming and for having moved through the challenges we faced as an organization. I am also deeply aware that leadership in the executive director role is only successful when interconnected throughout the organization and interdependent on the wisdom and experience of staff and board members. The late Sarah Fuller, who served as Cultural Survival’s Chair of the board of directors (2008–2017) was an admirable woman leader and mentor who shared her knowledge, wisdom, experience,and most of all, her courage and strength. Sarah was a pioneer and inspiration for women in business and led an impressive career. She was instrumental in supporting the leadership of our organization and the board of directors, and guiding the growth and future of the organization. Sarah opened herself, as well as her Little Compton, Rhode Island home, to Indigenous artists who would often stay with her while participating at the Cultural Survival Bazaars.

One year after Sarah’s passing, on this rising morning overlooking Puget Sound from Whidbey Island, as I think about how we might honor Sarah’s legacy and the gift she brought to Cultural Survival, I am reminded of her spirit and generosity. I am probably in the most fitting space to write and reflect about Sarah, which is in a place of solitude where I can look up at the sky, out over the ocean, through the forest, and reach out to capture the essence of the natural world into my thinking and feeling as I write this. Sarah loved the outdoors, attested to by her stories of camping and fishing with her husband, Bill, along some of the grandest rivers in the western United States. When I became the executive director of Cultural Survival, Sarah expressed her support and desire to strengthen the organization’s work through an environmental program. She recognized the importance of the environment and its ecosystems, especially what they held for Indigenous Peoples, along with her own love and respect for the natural world. We discussed the ways in which Indigenous Peoples, who comprise five percent of the world’s population, are living in the world’s richest areas of biodiversity and are working to protect their lands and territories in the face of immense challenges from resource extraction, development, and climate change. While environmental issues were already central to our advocacy work with Indigenous Peoples, we began to conceptualize what more we could do to address the issues and impacts of climate change, and Sarah began to think about how to raise funds to support the initiative.

What emerged was an initiative in which Cultural Survival brought together Indigenous Peoples, scientists, policymakers, students, educators, community based people, and environmental and conservation organizations to address the challenges of understanding and responding to a changing and variable climate, extreme weather events, and research and policy needs. In April 2017, we convened a three-day symposium in Boulder, Colorado: “Pathways from Science to Action.” The goal was to facilitate dialogue and discussion among diverse stakeholders working towards inclusive solutions and cooperative models in addressing climate change by integrating Indigenous science and Western-based climate science. Over 140 participants from around the globe convened for dialogue and strategies for action focused on cross-cultural approaches for adaptation solutions to climate change through collaborative efforts between the science community and Indigenous Peoples, educational institutions, and local communities, in an effort to build just climate pathways.

Intentionally, the convening was held in an Indigenous community, on the issues, causes, and impacts of climate change for Indigenous Peoples and their local communities, and to engage and explore how their knowledge intersects with Western climate science. Involving Indigenous Peoples in climate change initiatives is one potential solution for increasing the resiliency of Indigenous communities and addressing climate change on a broader scale. The perspectives and knowledge of Indigenous Cultural Survival Quarterly Peoples serve as an invaluable source of knowledge for climate change adaptation and mitigation. Sharing this knowledge and shifting the narrative to understandings of interconnected and interdependent living with Mother Earth and with each other, is key to mitigating climate change and restoring balance in the world. For participant Alicia Sarmiento Sanchez(Nahuat) from Petlacala, Mexico, "These events that Cultural Survival has organized hold so much value in strengthening our knowledge and permit space for Indigenous farmers in the community to share our knowledge and traditions.They also allow us to learn from others, and that strengthens us. Beyond the financial assistance to participate, Cultural Survival also supports processes which are greatly important— processes of co-existence between one another, the community,and Indigenous people are much needed, because it makes us feel that we are not alone—in fact that we are many."

Sarah would be proud to know that her shared vision of engaging an environmental initiative at Cultural Survival is being realized. Through her philanthropy and funding, she respected the importance of reciprocal relationships with Indigenous Peoples and their communities. Sarah’s passion, generosity, and dedication to Cultural Survival’s mission lives on in our work as we envision a future that respects and honors Indigenous Peoples’ inherent rights and dynamic cultures, deeply and richly interwoven in lands, languages,spiritual traditions, and artistic expression, rooted in self-determination and self-governance.