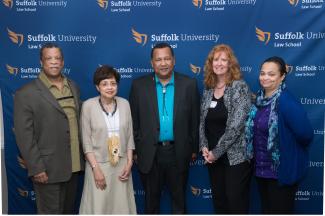 Native land loss, the policies that enabled it, and the subsequent consequences on Native American tribes in Massachusetts was the subject of a panel discussion at Suffolk University last April. “A Hidden History: How Massachusetts Law and Policy Facilitated the Loss of Tribal Lands” convened with an opening blessing by Jim Peters, executive director of the Massachusetts Commission on Indian Affairs. Panelists included Ann Marie Plane, an associate professor of history at the University of California-Santa Barbara; Cheryll Toney Holley, chief of the Nipmuc Nation and Hassanamisco Band of Nipmuc Indians; Raymond Trusty Williams, Jr. (Golden Hawk), vice president of the Tribal Council for the Chappaquiddick Wampanoag Tribe; Alma Gordon-Smith, sachem (chief) of the Chappaquiddick Wampanoag Tribe; and Bill Hunt, vice chairman of the Herring Pond Wampanoag Tribe in Southern Plymouth, Massachusetts.

Plane provided the context for the discussion, explaining “how a land-holding Native majority population became a landless minority over the span of just a few centuries [and] was virtually erased from the awareness of local society.” She pointed to the imposition of legal wardship, 19th century ideas about so-called racial purity defining “real” Native Americans, and the misapplication of concepts of equal rights and blind justice as keys to colonial-era land procurement.

The advent of legal control over Native populations dates back to the 17th century as colonists established land claims under the auspices of both crown and religious law; such efforts included “praying towns,” which were set up in an attempt to convert Native people to Christianity and organize their interactions with English colonists. Native subjugation was aided by widespread pandemics and the ensuing decimation of tribes, events interpreted by the non-Native settlers as divine retribution and further solidifying their notions of the righteousness of colonial settlements.

English doctrine about land ownership—namely, that unoccupied lands could be legally claimed—also contributed to Native land loss. Since Native people had different concepts of governance and land use, their migration patterns created vacant territories. Holley explained: “We weren’t wanderers and vagrants; it’s just how our traditional way of life was. We knew where to go and at what time to go there. . . . We never had that concept of ownership before.” Even after losing official title to their lands, however, Native people often retained customary rights of access to the areas and returned to places that were culturally significant.

“Despite the fact that they felt completely entitled, legally and religiously, to these lands, colonists did purchase land from Native landholders and sachems,” Plane said, noting how multiple lines of descent and competition for resources complicated the deals. Because there was no Free, Prior and Informed Consent, Native people were forced to operate within an imposed foreign legal and tax system with little understanding of the consequences for the future. Toward the end of the 18th century, English settlers developed a guardianship system ostensibly to prevent the abuse of Native Americans during land negotiations, but in reality only furthering the fraud, abuse, and corruption. Guardians were paid by the tribes, but often the tribes’ only sources of income were from sales of land or resources. Holley described how the majority of the Hassanamesit Nipmuc reservation, near today’s town of Grafton, was sold to English families for £2,500. “They’re supposed to distribute the funds from the purchase to the Native people when they need it, but instead what happens is that it disappears,” she said.

Multiple state congressional reports from the mid-1800s investigating such guardianships acknowledged that many guardians had siphoned trust funds for personal use and that the state was indebted to several tribes. “Without the money from these trust funds, the Nipmuc people began to sell off the remaining land to pay off debts, back taxes, and care for the sick and elderly, to build English-style houses and fences, the things they could have used the trust funds for,” Holley explained. “People accumulated little debts like the general store bill, and they would have 10 acres of land sold off to settle those. Loss of land destroyed communities. Families could not support themselves on dwindling acreage, could not farm, hunt, or gather because these were someone else’s property and fences were put up. They had to move away to find jobs.”

Today, only three acres remain of the original Hassanamesit reservation in Grafton. Although no Nipmuc people live on their traditional lands, they continue to congregate for cultural events that serve as an important connection to their ancestors.

The Chappaquiddick Wampanoag once inhabited the entire island of Chappaquiddick, a small is island off the eastern end of Martha’s Vineyard. But by 1788, European expansion via unscrupulous land deals left the Chappaquiddick with just one-fifth of the island—mostly sandy soil that was difficult to cultivate. The Enfranchisement Act of 1869 granted full citizenship rights to Native people and also removed the special status possessed by the state’s 10 reservations, effectively eliminating Indian communal land holding. Thousands of acres of reservation land were divided up or sold in the intervening years, and the previously held Chappaquiddick territory became part of Edgartown. After the land reallotment most Chappaquiddick dispersed to the mainland in search of employment, mainly in domestic servitude. “It was a struggle for our people to maintain our sense of community and eke out a living,” Gordon- Smith said. Today, two large Chappaquiddick families remain on the island; the tribe is working to reclaim lands by untangling the complex history of title transfers and land sales.

Although Native people lost control over their lands, they never lost their cultural connection, and in fact have maintained a continual presence in most areas. Hunt spoke about the Wampanoag tribal land of Herring Pond, which traditionally ranges from Plymouth, Massachusetts to parts of upper Cape Cod. The original reservation was laid out in the 1700s totaling 3,000 acres, but in 1742 the Commonwealth ordered all remnants of historical tribes to move to one of four communities with functioning governments: Mashpee, Aquinnah, Herring Pond, or Hassanamesit.

During Herring Pond’s assimilation, the Wampanoag struggled with issues of debt, earning a living, and creating a stable community, difficulties encountered by many other tribes. In order to survive, many moved off of reservations and adopted English habits. When the balance of Herring Pond was finally auctioned off in 1873, the tribe largely disappeared from historical records—but its people persisted, remaining in traditional areas and continuing key aspects of their culture. In 1928 the tribe organized its first powwow in over 200 years, and since then has also turned the Pondville Baptist Church Meeting House into a central place of congregation. “Considering all of the things that have been done to remove Natives from their land, whether it was legal or illegal, the fact that we’re still here says a lot,” Hunt said, adding that the tribe is still discovering property to which it holds the title and is working to rebuild the community.

The European appropriation of tribal land has had far-reaching consequences for Native Americans, as traditional healing methods, arts, governance, original language, and spiritual beliefs related to the land were all disrupted. Speaking about the Chappaquiddick, Gordon-Smith said that “the allocation of their land has taken a toll on many levels: community ties are challenged, there is conflict within tribes, they could not comfortably visit the land, and it’s difficult to build self-esteem as a people.” But as Plane said, “Native peoples never gave up their identity. They never gave up their connection to the land. They never let the state decide who was or was not Native,” and that “this long and proud tradition of activism in these communities is continued today in the efforts of many in the state of Massachusetts who are trying to obtain resources essential to continue cultural survival.” Hunt concurred, enumerating ways that tribes keep their culture and history present today: “Through our youth and our elders. Our elders transfer a lot of the knowledge and wisdom that they have. We have classes making skins, dancing, singing. We have a language reclamation project where children can learn to speak Wampanoag,” he said.

Holley summed up the significance of the intergenerational commitment to rebuilding Native communities: “I think the reason why my people still exist is there have always been people in every generation that kept reminding us who we were, and that we always had one piece of land to cling
on to. So I am very grateful to the people who came before me that held on to that.”