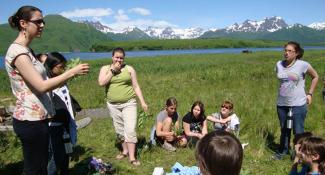 Alutiiq dance traditions returned to Kodiak Island last August after an absence of more than two centuries— a casualty of Russian and American missionaries’ proselytizing influence in tribal communities, where Native dancing was forbidden or discouraged as an irrelevant and unnecessary practice. In order to reintroduce Alutiiq youth to creating new artistic performances in the traditional storytelling method, Dr. April “Isiik” Counceller (Alutiiq), manager of the Alutiiq Museum’s Qik’rtarmiut Alutiit (Alutiiq People of the Island) Language Program, organized a three-day dance workshop with professional Central Yup’ik dancer and University of Alaska professor Mary John, Ph.D., and two other professors in the University of Alaska system, Theresa John, Ph.D., and Agatha John-Shields, M.A.

The workshop culminated in a performance for the community at the Kodiak National Wildlife Refuge Visitors Center. These sessions brought traditional knowledge of Native dance from the neighboring Yup'ik culture to Alutiiq dance group members, who created new dances with their Elders and instructors. Dances were created with traditional building blocks, but expressing contemporary stories and experiences, such as crab fishing and survival of the 1964 Great Alaskan Earthquake and tsunami. The Alutiiq (also known as Sugpiaq) people, have historically resided in Southern Alaska in coastal communities ranging from the Alaska Peninsula eastward across Kodiak Island and the Kenai Peninsula to Prince William Sound.
By composing Alutiiq-language lyrics and a song together in advance at their weekly language club meetings at the local Kodiak tribal center, Counceller and fellow members laid the groundwork for the performance—excerpts of which can be seen online at OurMotherTongues.org. However, reintroducing Alutiiq dance traditions to Kodiak Island is just one small component of Counceller’s and many other Alutiiq tribal language leaders’ efforts to provide new educational opportunities and career pathways for Alaska Native youth.
“The [Alutiiq] language movement has matured to the point where we now need a consistent writing system since semi-fluent speakers are able to produce teaching materials; we want to be able to use these [materials] in five years,” says Counceller. Recent gains in language revitalization efforts include a three-year Native American Language Preservation and Maintenance Grant from the United States Department of Health and Human Services’ Administration awarded to the Native village of Afognak. The grant facilitated the implementation of the Kodiak Alutiiq (Qik’rtarmiut) Teacher Mentorship Project. Developed through the Qik’rtarmiut Alutiit Regional Language Advisory Committee, the project attracts participants from many walks of life to bi-monthly meetings. Young tribal citizens now have the opportunity to become second-language learners and teachers of the Alutiiq language through the Native Village of Afognak’s teacher-mentoring project. The strategy of the project builds from current, semifluent speakers’ skills and quickly guides them through to a higher level of competency. Language learners simultaneously acquire instructional skills to pass their language knowledge on to others in the community.
Alutiiq students of all ages interested in their ancestral language can also enroll in a newly launched Alutiiq Studies program at Kodiak College, supported in part by a five-year, Title III United States Department of Education grant that includes support for student recruitment and retention support. With the new funding, Kodiak College, a community college unit of the University of Alaska, Fairbanks, now offers both certificate and associate degree programs in Alutiiq Studies, with several specialized tracks offered—all of which will include Alutiiq language as a critical component. Students will be able to transfer seamlessly to a four-year institution throughout the state university system, or enroll specifically to advance their language fluency.
“We’re exactly where we need to be,” says Counceller, assessing overall reach and scope of current language revitalization efforts. The long-term involvement, financial investments, and language leadership from the Native Village of Afognak—including Liicugtukut Alutiiq, “We Want to Learn Alutiiq” at AlutiiqLanguage.org—coupled with the emerging Kodiak College Alutiiq Studies program, and the language education programs ongoing at the Alutiiq Museum and Archaelogical Repository, all have revitalized language in an impressive and dramatic manner.
Counceller, a founding member of the Qik’rtarmiut Alutiit Regional Language Advisory Committee, mother of two young children, and former language apprentice in the Alutiiq Museum’s earlier master-apprentice project—is wellpositioned to help carry forward Alutiiq language to new generations of young people. In the fall of 2010, she completed a dissertation entitled “Niugneliyukut (We are Making New Words): A Community Philosophy of Language Revitalization,” through the University of Alaska, Fairbanks’ Interdisciplinary Program in Language Planning and Indigenous Knowledge Systems, while also working as the Alutiiq Museum’s language manager—a role she’ll continue to fill while assuming her faculty position at Kodiak College. Having spent the past 10 years studying Alutiiq language at the museum, with elders, and via her academic research, Counceller is now helping to lead efforts to fine-tune the Alutiiq orthography— standardizing the alphabet, spelling rules, sounds and combinations. “There’s a really big need for that because of all the new language materials coming out in the community,” she explains.
While working in the education and language departments at the Alutiiq Museum in Kodiak since 2002, Counceller has spearheaded Alutiiq language documentation, education, and revitalization, including working with first-language elders to found the Alutiiq New Words Council, or Nuta’at Niugnelistet (New Word Makers), which has received National Science Foundation funding support since 2007 for the Alutiiq Living Words Project. The project “updates” the language with new terminology. Elders and second-language learners convene regularly to create Alutiiq vocabulary for words like “email” (cukasqaq kaliqaq, “fast paper”) and “ATM” (akirsurwik). The Nuta’at Niugnelistet will continue to meet regularly to transport their language fully into the 21st century and online. Their efforts, including an interactive Alutiiq place names map, selected recordings, and document downloads of the latest new words, are all available through their Alutiiq Language web portal.
Counceller is indeed a well-spring of knowledge, and she is only too happy to be a resource for those seeking career and higher education opportunities related to linguistics, anthropology, heritage revitalization, and museum studies. She has a library of academic articles and sources related to Indigenous and community research methods, language revitalization and planning, and Arctic cultures. She is also wisely aware of myriad challenges that Indigenous language communities face as they strive to flourish in an era of globalization and online communication. However, the challenges are not insurmountable. Counceller’s multigenerational team of Alutiiq language activists seem to have found the key to local success: “The most important thing in all of this is that we continue to work together so our efforts are compatible,” says Counceller, also known as Isiik, or Owl in Alutiiq.