The Quechua: Guardians of the Potato 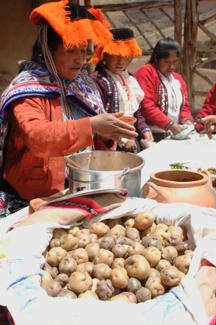 At four the morning, Quechua farmers in the high altitude Andean communities of Amaru and Paru Paru, Peru are beginning the day in their fields, or chacras. Most of them are tending to a crop representative of the Quechua diet and culture: the potato. “Our most basic food is the native potato,” says Isabella, a Quechua woman and respected elder from Amaru.

In nearby Paru Paru, Lino Mamani Huarka and his family grow between 120 and 140 native potato varieties. This is only a small portion of the varieties that exist within Peru; more than 2,800 types are known to have originated in the country. The existence of these varieties can be attributed to the high value the Quechua people place on their cultural traditions and biological diversity.