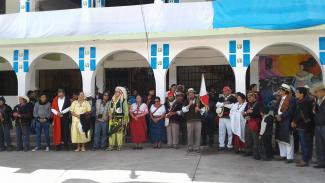 The Comunidad Maya Pixan Ixim are members of the Q’anjob’al Maya of Guatemala living in diaspora in the United States. After years of living in Nebraska, the traditional ancestral government of the Q’anjob’al, which also includes the Akateko, Chuj, and Popti Maya Peoples, has developed a bilateral relationship with the American Indian Omaha Nation. This Nation to  Nation relationship is grounded in the UN Declaration on the Rights of Indigenous Peoples Article 36.

From September 21–28, 2018, leaders of the Omaha Nation traveled to Guatemala for a historic summit between the two traditional governments. Their objectives were to commemorate and spread awareness of the UN Declaration on the Rights of Indigenous Peoples; witness the ceremonial visits of elders of the Q’anjob’al Maya government to sacred sites; and continue to mark Maya territory by visiting and praying, consulting sacred sites on the future of the Q’anjob’al Maya Nation, and furthering intergovernmental dialogue on how to implement Indigenous Peoples’ human rights for the benefit of the Q’anjob’al Maya on Omaha Nations Territory with emphasis on immigration and economic development programs. Cultural Survival provided funding for transportation costs through the Keepers of the Earth Fund, and is producing radio programs based on event coverage through our Indigenous Rights Radio program. 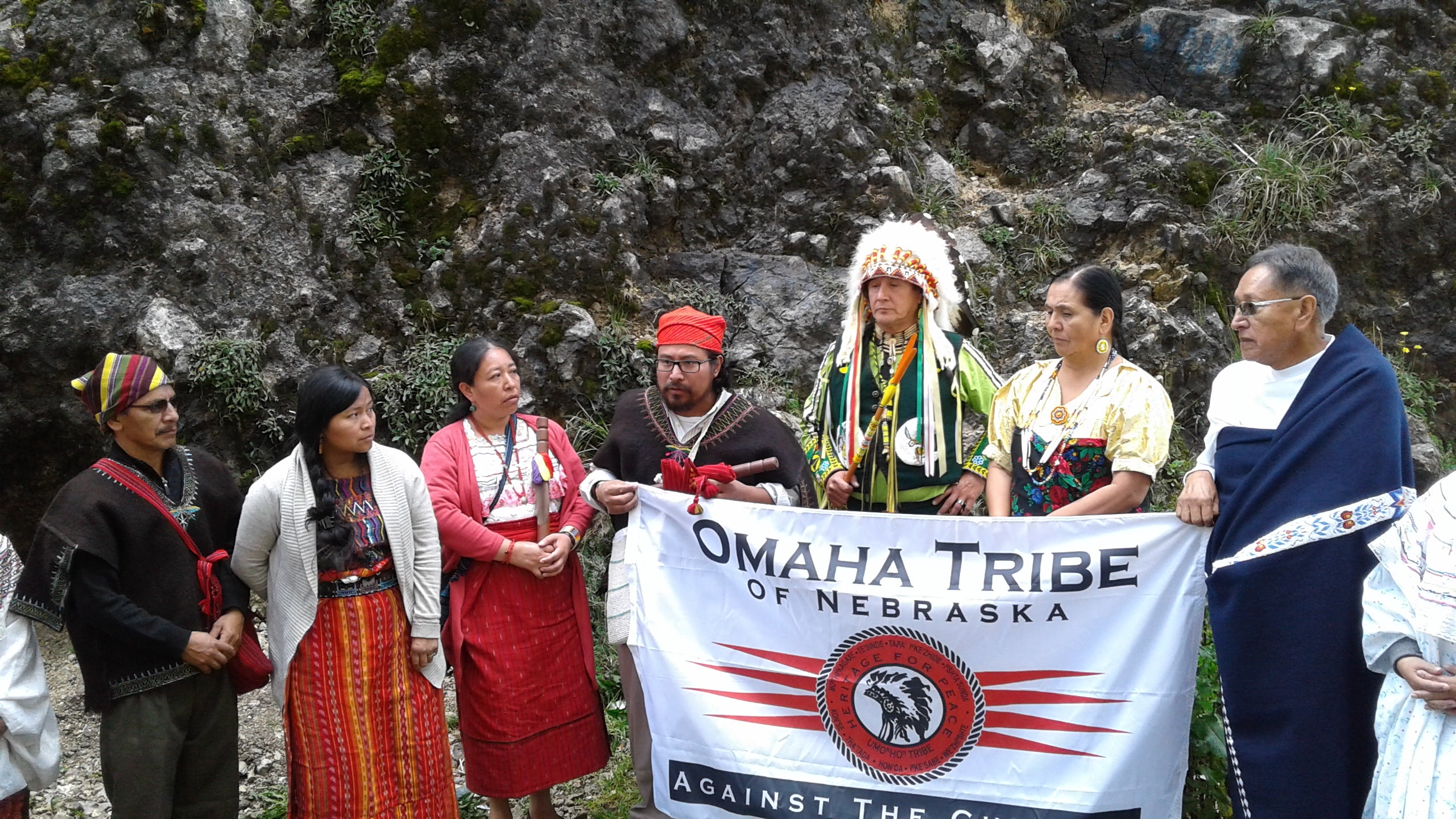 The tour began on Kaqchikel lands in Tecpán, Chimaltenango, where the delegation visited the ruins and held a ceremony that gave them first connection with one of the largest Maya communities in Guatemala, the Kaqchikel. The connection that the Kaqchikel people felt with the Omaha was so great that one of the Maya elders, Cristóbal Cojtí, decided to join the tour and travel to the West for subsequent encounters.

The next stop was San Andrés Xecul, Totonicapán, where the delegation met the K’iche’ people. Chairman of the Omaha Nation, Michael Wolf, gave a speech to all present, without a microphone. “Our lifeways have changed so much that now we have the need to use a machine so that our voice is heard. We must learn to speak loudly, so that our thoughts and feelings can be heard without using technology,” he declared. From there,  the delegation visited Olintepeque, Quetzaltenango, where representatives of the Omaha and of the K’iche’ people,  Chuj, Popti’ Akateko, and Q’anjob’al, exchanged views on the importance of the union of the Indigenous Peoples in Latin America, environmental struggles, and the importance
of local ancestral governments.

The main objective of the exchange was the visit to the Q’anjob’al homelands. After several hours of travel from Quetzaltenango to Huehuetenango, a ceremony was held to enter Q’anjob’al lands at the sacred site Kab’Tzin, known popularly as Captzin. With prayers and a short speech, the Omaha and Maya Q’anjob’al members, accompanied by representatives of other Maya people, made stops in San Juan Ixcoy and San Pedro Soloma. The reception of the delegation by the Q’anjob’al people was very moving, as a large crowd came to receive them with flowers and pom (incense) while the tun and chirimía announced their arrival. Everyone met in the communal hall, where the head of the Nation took the opportunity to speak about the pride of belonging to a Maya people and the importance of the power Indigenous Peoples possess. 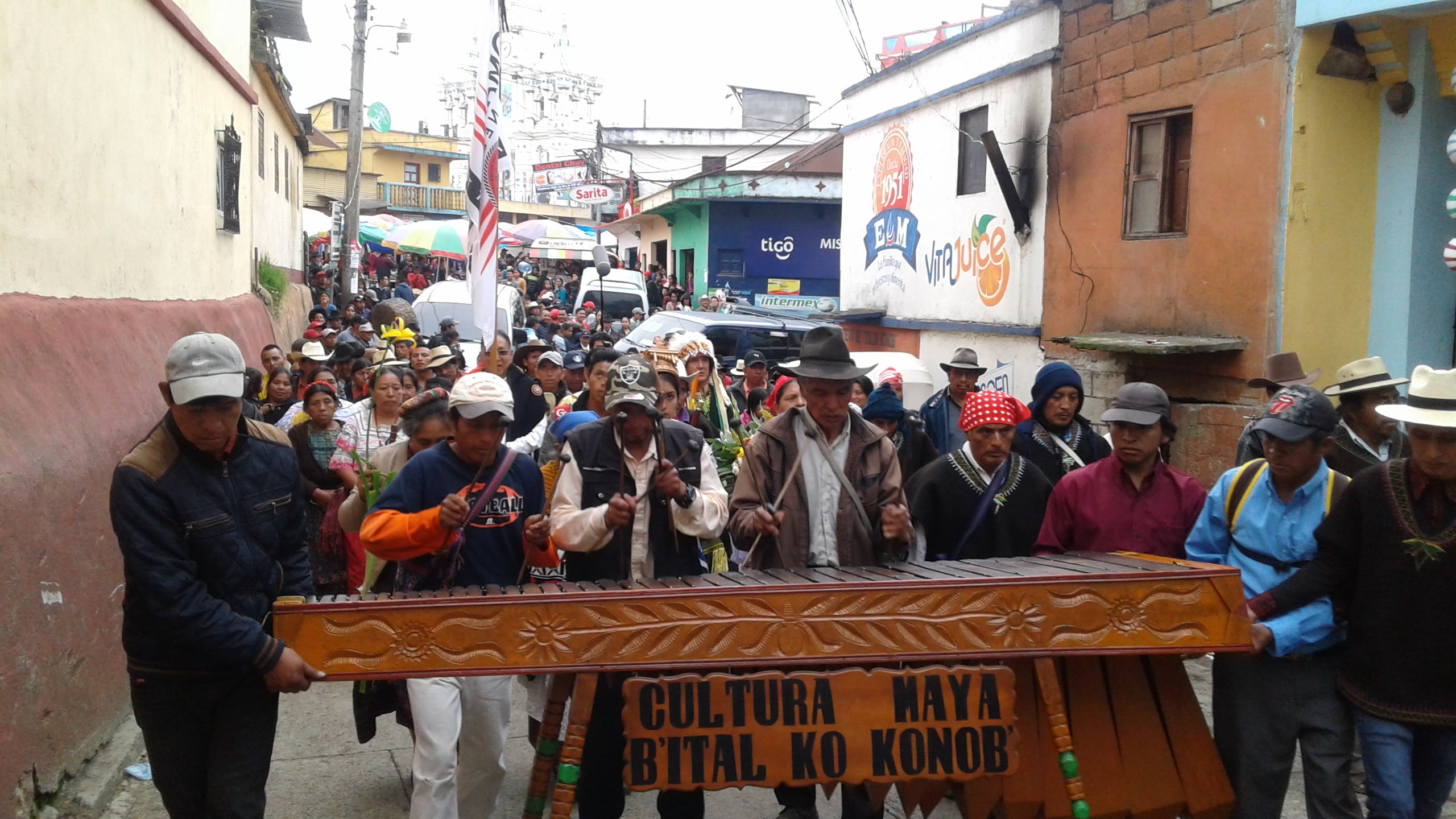 Over the following three days, visits were made to sacred sites to perform exchange ceremonies and share Maya spirituality. For the Omaha delegation, a visit to a ceremonial center that took several hours on difficult access roads was one of  the most important moments of their visit: “Although it was  a difficult trip, we were able to make the journey because we were inspired by the strength of the men, of the women, who took their young children, and of the elderly, who, despite their age, managed to do the walk with us.”

On the last day of the visit, important agreements between the two Peoples were made. They committed to strengthening each other through their sacred ceremonies; to implement  a program of economic development based on regenerative agriculture; to secure memberships for Akateko, Chuj, Popti, and Q’anjob’al Maya Nations on territory of the Omaha  Nation; to organize youth exchanges; to strengthen ancestral music and arts; and to seek recognition from the City of Omaha and the State of Nebraska for the Maya  Nation within the city and state level Commission of Nebraska for Indigenous Issues.

To learn more about the Keepers of the Earth Fund, visit: www.cs.org/koef.