How We Make Progress, How We Have Change: Rebecca Adamson 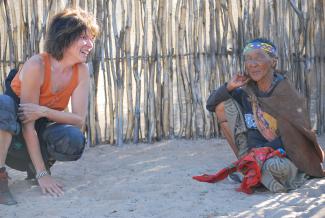 Her voice reflects her passion. Her work reflects her commitment. Her legacy is an inspiration for many. Rebecca Adamson (Cherokee) is a businessperson and Indigenous rights advocate. She is the former director, president, and founder of First Nations Development Institute and the founder of First Peoples Worldwide. Born to a Swedish-American father and a Cherokee mother, Adamson grew up in Akron, Ohio and spent summers with her Cherokee grandmother in North Carolina. Reflecting on these early years, she says, “My journey and my vision has been driven by knowing we could solve our own problems and really wanting to listen to the ways our cultures helped us and supported our problem solving.”

Early in her career Adamson was hired by the coalition of five Indian Controlled Schools in the country. As she tells it, “the schools sued [then-President] Nixon to release the Title IV Indian Education funds. Title IV provided funds for parental involvement, among other things.” With the release of that money, the Coalition of Indian Controlled Schools were able to help tribes start their own schools. “All of this dovetailed into the Indian Education Self Determination Act. After they won and then they hired me, and I got to work in our communities, and it was amazing.” She also worked to get the Indian Self-Determination and Education Assistance Act of 1975 passed, giving tribes authority for how they administered the funds.

Adamson’s background was in philosophy, a field she entered with “an undying belief that as Indigenous Peoples, we needed our own models. People constantly look at our systems and they talk about them being quaint. We get pushed back on two things: one is that the principles that I call ‘fundamental design principles’ are called romantic notions in Western thinking. But then they get caught up thinking that we’re saying individual Indians are better than individual Westerners. Both of those are just wrong. We [have] built systems that actually incentivize the good behavior.”

Later, as she pursued a graduate degree in economics and “began really looking into the finances of it,” she says, “what really hit me was how all the models that we were taking out into our communities carried Western values— they weren’t our values. So I thought if we had a development process that really listened and brought the technical and the resources together with the brilliant thinking and problem solving of Indigenous peoples, we would get new models.” This is how the idea for First Nations Development Institute was born in 1980.

Initially, the primary purpose of First Nations Development Institute was to create a development process for Native people to do their own problem solving. The Institute created the land consolidation model, the tribal investment model, marketing, arts, food sovereignty, traditional food processes, agriculture, and the first microloan fund in the United States. The first 15 years were devoted to exploring Indigenous economics domestically, and the Institute began global outreach in 1994. Their first international field project grew into First Peoples Worldwide.

Since 2007, First Peoples Worldwide’s Keepers of the Earth Fund has awarded nearly $1.5 million to Indigenous communities around the world representing 427 Indigenous groups in 53 countries. “Making that international transition has been extremely rewarding,” Adamson says. “It is magnitudes more difficult, more violent, and more discriminatory internationally, with what other Indigenous groups are facing. The grants are really what bring the energy and excitement and the heartbeat into our work.” She adds that the fund has supported projects that are “really struggling in dealing with huge global corporations and the pressure of being surrounded by the extractive industries and the governments that want the resources. In those cases we may be the only funder out there that is funding our communities to make their own decisions. One-third of our grantmaking portfolio had never had funding before. So we’re building those links back up to national and international groups so that we build that political machinery, bit by bit.”

For Adamson, getting corporations and governments to respect Indigenous rights requires a multipronged approach. “In the long run I think the activist groups keep the heat on. Social media has absolutely been bringing attention to it. If corporations want to manage by headlines, we’ve got to get them headlines. The activist groups are doing good work on that. Legal and rights groups are trying to get legal precedents set. What hasn’t really been approached in all this is the market. That’s why First Peoples Worldwide did the Indigenous Rights Risk Report (see page 14), to try to get one more strategic tool out there that we could all use. I think it really will bring more power and augment what we’ve already got underway,” she says.

Forward progress, however, isn’t always linear: “We don’t have a silver bullet anywhere. We could win a court case and the government decides not to uphold it. We could win an activist and media campaign, and as soon as the headlines die down they turn around and do it again. We make progress and then we slide back. [But] that is how we make progress and that is how we have change.“

After concluding its risk assessment of US-based extractive companies, First Peoples Worldwide is now turning its attention to Canada; Adamson estimates that about 70 percent of the global equity capital financing oil, gas, and mining comes from the Canadian exchange. “What we hope to do is bring the Indigenous groups in areas where we’re researching together with the other groups in the areas we’ve already researched. That’s the idea, to really start sharing this information among ourselves,” she says.

To aid in this information sharing, First Peoples Worldwide is currently developing curriculum on shareholder advocacy and planning to organize Indigenous shareholder advocacy leadership training centers in Indigenous areas where resource extraction is rampant, including two centers in Canada, one in Mexico, and one in Argentina. “We are organizing these centers so that our people in those places have the accountability they need to really negotiate and control their destinies with these corporations and with the government,” she explains.

Getting resources and information to the grassroots is a must for Adamson. “Real successes have been primarily [achieved] by us, by Indigenous people. We’ve got thousands of grassroots groups out there, and we need to be able to link them with the international and national groups. We have an ability to build the political machinery globally that we need to achieve change. We need more local capacity. Funders right now tend to build somebody else’s capacity, to study us, to work for us, to be an intermediary with us, but never fund us.” She cites the adoption of Free, Prior and Informed Consent (FPIC) as a prime example: “We saw hundreds of thousands of dollars going out to non-Indigenous groups to do FPIC studies. The Indigenous groups are the ones having to figure out how to implement it, and yet all of the resources went to other folks to study us in doing it.”

Adamson believes that Canada, at the epicenter of so many protests and recent controversies around FPIC and Indigenous rights, “is really the microcosm of all of this. What the First Nations have made [Prime Minister] Harper’s administration understand is they can stop his resource development agenda.” She also points to the Amazon region, which “has had the lowest bids on concessions in its history,” a cause she attributes directly to protests and work stoppages. “We can stop the production and the extraction of these resources and get heard, but it’s a path that could lead to violence, which in many cases has been a struggle for our lives,” she says.

As the First Peoples’ risk report illustrates, in-country risk is one of the biggest drivers of corporate risk. “Corporations want to go to where there’s the least risk, and if it’s working with us, we can be at the table directing the government to title our land, uphold our rights,” Adamson says. “We are finding out through the risk report that it’s good business when countries uphold Indigenous rights. My hope is that we can get the results into the market quicker; that we can prove that countries that want economic performance have to uphold our rights to get it, and companies that want profit have to uphold our rights to get the profit. We’ve got to get that message out more and more.”

Image: Rebecca Adamson with a San elder in Botswana. Photo Courtesy of FPW.