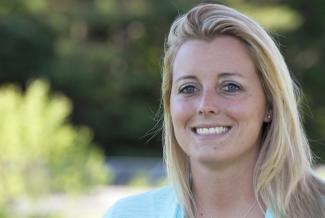 I like to think I had the ultimate childhood, one of those you see in movies and think can't be possible. Although I did not live on the reservation after the age of five, I spent a significant amount of time there with my grandmother, Theresa Hayward, who lived on Elizabeth George Drive—named after my great grandmother who had spent her life living on the reservation. My extended family lived on two streets, the first phase of government housing built on the reservation. Getting the first phase approved was such a great accomplishment, and quite possibly the first crucial step in becoming self-sufficient—going from fighting for permits to 10 by 55-foot trailers where the water supply was fed through garden hoses and makeshift plumbing, to negotiating with the power company to install a utility pole in a remote location for electricity, to brand new homes with modern day amenities. It was a tight-knit community on the brink of immense change.

The year I was born (1983) was the year the Mashantucket Pequot Tribal Nation received federal recognition and sovereignty—the right to autonomy and self-government. This was a time of excitement. We were finally able to begin the fight for what was ours and obtain the land that was unlawfully taken by the state from our ancestors in 1856. Little did I know I was growing up during a historic time for my people. The tribe purchased “Mr. Pizza” and had been selling organic produce supplied by a hydroponic greenhouse, but the opening of the Bingo hall in 1986 fueled the start to the tribe’s economic development and revitalization. Then there were talks of doing something bigger, more extravagant; something to put us on the map, so to speak.

My home was across the street from two of my mom’s sisters and one of my cousins, near the cul-de-sac and the homestead. From the end of the driveway I could see my grandmother’s house up on the hill; listening hard, I almost hear my aunts shouting their plans across the street, or my grandmother calling for me. I remember how much fun it was playing outside with my younger cousins. We would be outside from first thing in the morning until dark. We were welcome in any house, at any time, and every house felt like home. There was a great sense of security and comfort knowing that you were surrounded by family and always had someone to turn to if in need. Whether it was a game of baseball in the cul-de-sac, riding bikes, building forts in the woods, playing cops and robbers, hiking around the reservation and exploring, or digging in the dirt, we were simply satisfied.

When I was five, my parents decided that they wanted to purchase their own land and build a new house, so we moved off the reservation, but not too far—just down the road— close enough to stay connected. When my brother was old enough for preschool, my mom went back to work. I continued to ride the bus to Nan’s house on the reservation every day after school. When it came to weekends, I remember calling Nan asking if I could spend it with her and, if not for the entire weekend, I got to spend at least some of it on the rez.

Looking back, I also spent a few summers with Nan and Pop, too. Nan always had someone stopping by to visit. There are a few visitors that I remember in great detail. One man who came rarely, that Nan would always be extremely happy to see, was her eldest son, Skip. Since his vision of Foxwoods Resort Casino had come to fruition, it became increasingly difficult to keep track of him. One morning we heard a knock at the door. It was Uncle Skip. Nan stopped everything and welcomed him in. They chatted for what seemed like hours. Then Uncle Skip revealed he had a surprise for her. He went to the door and brought back another gentleman. “Hi. I’m Harry Belafonte. It’s very nice to meet you,” he said. The look on Nan’s face was priceless—pure shock. Looking back, I’m sure she was probably a little embarrassed, too—after all, we were still in our pj’s! At the time, I had no idea who he was so I continued playing with the “Hot Potato,” and then after a few min- utes, Harry lay down on the floor next to me and began to play along. Uncle Skip always had a way of surprising Nan with something out of the ordinary. One time, he set up dinner for her and my grandfather with Johnny and June Carter Cash. After that dinner I was able to meet them, too, and see them perform at Foxwoods. That was the ultimate experience—meeting a legend, sharing it with my best friend (Nan) and seeing her so happy.

Growing up blond-haired, blue eyed, and of mixed European-Native American descent, I don’t look like the stereotypical Native American. In elementary, middle, and even high school, I had a hard time getting my peers, and sometimes the teachers, to believe I was Native American. Some would say, “you’re not a real Indian, you have blond hair and blue eyes.” I didn’t like that I had to explain anything at all, even to the other Pequot children who said they were more Pequot because of the color of their skin. To this day, I still find some shocked to learn of my heritage because I don’t “look like an Indian” or fit the stereotype that the media has created for Native Americans. Recently I was faced with a similar issue: I was at the doctor’s office for a routine checkup, and somehow it came up that I was Pequot. The doctor couldn’t possibly have reacted worse! I have never seen such a look of disdain and overall disbelief. To make matters worse, she began interrogating me. It felt as if I were being cross-examined for being me. Unfortunately, the questions she asked were those I have had to continuously answer my entire life—questions that still have me questioning my identity into my thirties. “Really? You don’t look Indian. What is your blood quantum? Where do you get your ancestry from, your grandmother or something?” as if to add a little condescension to the mix. Needless to say, I will not be returning to that office.

I consider myself lucky and honored to have grown up and witnessed such a great time in Pequot history. I have been given opportunities that I might not ever have had, and have been able to experience life in a way that is unique only to our family and tribal nation. Though I moved off the reservation as a child and have lived off the reservation for quite some time, I still feel I “grew up on the rez.” Even though I wasn’t physically living here, it did not mean that I was any less connected or any less Pequot. I have remained attached to the land, my family, and my culture, and take pride in being Pequot. The rez, and Elizabeth George Drive in particular, will always be home to me regardless of where I choose to live. I will always cherish the memories of my childhood and growing up Pequot.

—Kimberly Shockley works for her tribe at the Mashantucket Pequot Museum and Research Center as the director of public programs, furthering the museum’s mission to inspire awareness and understanding of the histories, cultures, and survival of the Mashantucket Pequot Tribal Nation and North America’s Indigenous people. The museum stands as a testament to the survival of the Pequot people and all Indigenous cultures that struggle to maintain their identities.