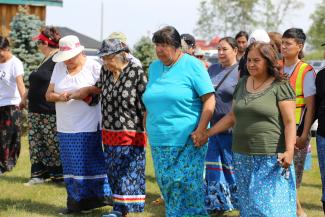 Respected traditional elders from Nations across Great Turtle Island (North America) and Abya Yala (Mexico, Central, and South America) came together in the center of the North American continent in Manitoba, Canada from July 19–22, 2018, having traveled from their respective territories East, West, North, and from the South, all the way to the Inca. At this gathering, the elders formally acknowledged that they have selected the Turtle Lodge at Sagkeeng First Nation, Anishinabe Territory, as their central house of knowledge and their place of governance as Knowledge Keepers and traditional leaders of their Nations and Peoples, which honors and connects the network of elders and regions across the territories and from where their voice can be shared with all Peoples.

The elders, most of whom are fluent in their original languages and knowledgeable in the ceremonies and teachings of their Nations and Peoples, were called together at the Zuguswediwin (“Lifting the Sacred Pipe”) National Elders Gathering, based on a dream received by elder Nii Gaani Aki Inini, Leading Earth Man (Dave Courchene) of the Anishinabe Nation. Courchene is the caretaker of Turtle Lodge, a sacred lodge he dreamed of over 30 years ago. It was built in 2002 by volunteers, mainly young people, using donated materials. In a dream he received while recovering from a major illness this year, Courchene had a vision of grandmothers from different Nations crossing a turtle- embroidered yellow blanket, carrying medicines and a declaration of commitment to an elder carrying a sacred pipe for blessing, witnessed by the people.

At the Zuguswediwin gathering, elders convened to discuss how to implement their nationhood and restore balance and wellness to their Nations and Peoples using their traditional ways. Young people and grandmothers from the Giigewigamig First Nation Health Authority provided the inspiration, arriving at the gathering after walking 185 kilometers over four days through the communities of Bloodvein, Hollow Water, Black River, and Sagkeeng. They walked in reverence for their ancestral way of life based on close connection to land, air, water, and fire. Other youth shared dreams and visions they had received through fasting on the land.

Delegates from national research bodies, including the Social Sciences and Humanities Research Council, Natural Sciences and Engineering Research Council, and Canadian Institutes of Health Research were welcomed and permitted to present questions to the elders on how to work together to provide a framework for respectful engagement of Indigenous communities, brought to the gathering at Turtle Lodge by the National Centre for Truth and Reconciliation. Their ques- tions were met with firm responses by the elders that they need to spearhead their own processes of sharing knowledge by setting agendas that are based on Indigenous values and priorities, deter- mined through a ceremonial context, and based within their own house of knowledge: Turtle Lodge.

Together the elders developed and ceremonially ratified the Zuguswediwin Declaration of Commitment of the Original Nations and Peoples of Great Turtle Island, a spiritual commitment to act in accordance with their ancestral laws and traditions. The declaration both begins and ends in the Anishinabe language. It is intended to be further translated into all the respective languages of the elders who signed it, after grandmothers carried it with medicines across the yellow turtle blanket in a powerful ceremony, passing it over to the pipe carriers at Turtle Lodge on July 21.

On July 22, the elders and witnesses took the Zuguswediwin Declaration to Manitou Api (“Where the Creator Sat”), an ancient sacred site in the center of the continent, to be blessed by a sacred pipe that was commissioned in Ottawa in 2016 by a national group of elders representing the four directions. At Manitou Api, the group also honored their ancestors and placed the document in the water for its message to be symbolically and spiritually carried around the world. One of the elders, Allan White, from Whitefish Bay Anishinabe Nation, came forward with an instruction he had received in the ceremony that the grandmothers and elders will dream and gather at the Turtle Lodge at the same time next year, bringing those dreams for the people to understand the full meaning and power of vision that comes from dreams.

The Zuguswediwin Declaration is being engraved into the hide of a buffalo and will soon be available for all to see at Turtle Lodge.

The Turtle Lodge has become well known internationally as a center for sharing traditional Indigenous knowledge on climate change. In 2016, Manitoba elders gathered there, as requested by the Assembly of Manitoba Chiefs’ Grand Chief Derek Nepinak, to discuss their response to a proposed pipeline coming into their territory. The Elders developed a document entitled “Ogichi Tibakonigaywin— The Great Binding Law,” which outlined the natural laws, duties, and responsibilities that each individual is born with to take care of the land.

In June 2017, Turtle Lodge hosted Indigenous Knowledge Keepers from across North and South America along with international climate change experts, who together developed 12 Onjisay Aki Climate Calls to Action focusing on actions to support ancestral knowledge, sovereignty, relationships, and transformation. For these efforts Turtle Lodge was awarded the Anne Lindsay Protecting our Earth Award by the Manitoba Eco-Network. In September 2017, Turtle Lodge hosted the Indigenous Knowledge Keepers and Scientists Gathering, co-chaired by Elder Dave Courchene and David Suzuki, which brought Indigenous approaches and teachings together with the climate change expertise of top Canadian scientists.

. . . We are the Original free and independent Nations and Peoples of Great Turtle Island, and the true leaders of our homeland.

In good faith we commit to exercising our birthright to live and implement our way of life.

We humbly acknowledge our Creator, who has gifted our Peoples with knowledge of how to have a sacred relationship with Spirit and the Land.

We humbly acknowledge the Earth as our Mother, the Source through which Life flows.

In good faith we commit to walk in the way of the Buffalo, who brings the Law of Respect—to give and to share. The Buffalo brings the gift of the Drum and the Pipe, the Drum that carries the Prayers and the hopes of the Nation, and the Pipe that holds the power to invoke the Spirit to come within our presence.

We commit to walk in the way of the Eagle, who brings the Law of Love, which is the essence of kindness in the heart of all that is alive. The Eagle nurtures and heals the spirit and emotions through Ceremony.

We commit to walk in the way of the Bear, who brings the Law of Courage, walking the Spiritual and Natural Laws.

Mother Earth provides all we need to live a healthy life. The Bear teaches us how to live on the land, and introduces us to our vision quests, rites of passage and fasting in Ceremony, to connect our spirits with our physical bodies.

We commit to walk in the way of the Sabe, who brings the Law of Honesty— kind words spoken from the heart. The Sabe brings medicine from the land for healing, including the sacred foods. The body is the lodge of the spirit, and needs natural foods, medicine and physical activity to stay healthy. We commit to gather our sacred medicines from the land and share them with each other.

We commit to walk in the way of the Beaver. The Beaver brings Wisdom, knowing our identity as defined by the unique gifts given to everyone. We commit to use our gifts to serve the Nation in helping build a strong, healthy community.

We commit to walk in the way of the Wolf, who brings Humility, understand- ing that there is one Creator for all, who loves each and every one equally. We humble ourselves to educate ourselves with the diverse unique knowledge that has arrived on our homeland, providing it complements and supports the values and rules of conduct toward each other and the land.

We commit to walk in the way of the Turtle, who brings the Law of Truth. To live and know Truth is to walk the Spiritual Laws of the Creator and Natural Laws of Mother Earth, taught on the land, in our lodges and our ceremonies, using our languages. Living a spiritual life as human beings will bring peace, love and kindness into our world.

It is in this spirit that we commit to build a community, reflecting our true identity, complete with the means to survive, creating our own currency for survival. This currency is based on the Seven Sacred Laws of Respect, Love, Courage, Honesty, Humility, Wisdom and Truth, relying on the spirit, the land and the natural seasons, for everything we need to survive.

We commit to continue to build a strong foundation for our children, grandchildren, families and communities, and that foundation is based on the Seven Sacred Laws . . .

Grandmothers and youth from the Anishinabe communities of Bloodvein, Hollow Water, Black River, and Sagkeeng arrive at the Turtle Lodge for the Zuguswediwin “Lifting the Sacred Pipe” Gathering, after walking 185 km from Bloodvein First Nation.