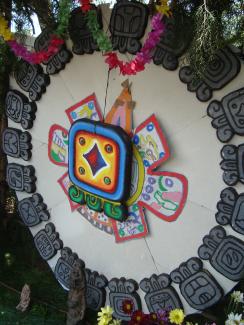 It seems the closer we get to December 21, 2012, the more we hear the “doomsday” myth repeated. It shows up in films, television commercials, cable specials, and print ads. To Maya priests, however, December 21, 2012, or Oxlajuj Baktum, does not signal the end of the world. The date actually marks the end of a 5,129-year Long Count calendar cycle, the end of one cycle and the beginning of another.

“I want to send a message to everyone in North America, and the rest of the world: You don’t have to be afraid, because 2012 isn’t going to end the world. [There will be] a new era of peace. Maybe the filmmakers weren’t listening when they asked about 2012, or maybe they got it from a bad source. But they are taking advantage of our culture, and profiting from it,” says Julian Velazquez, a Maya spiritual guide in Momostenango, Guatemala.

A recent discovery of a Maya mural in a chamber in Xultún, a large Maya archaeological site that flourished between 600 and 800 CE, provides additional confirmation that December 21, 2012 does not portend the end of the world. The mural, which is located near the Preclassic site of San Bartolo in the Petén Jungle of northern Guatemala, depicts the cyclical nature of time; the chamberwalls are covered in calculations that are thought to have aided scribes in tracking time. The mural includes glyphs and columns of numbers in the form of bars and dots, based on astronomical observations. Scholars believe that the glyphs refer to dates thousands of years into the future—perhaps as far as 7,000 years from the time they were painted—further undermining the misconception that the Maya were predicting the end of the world on December 21, 2012.

In a full excavation of the site last year, William Saturno, a Boston University archaeologist, and his team of students found what they believe to be the ancient workroom of a Maya scribe, a record-keeper of Xultún. The scribe’s calculations are barely visible hieroglyphic texts depicted on the east and north walls of the chamber that appear to represent various calendar cycles the Maya were noted for: the 260-day ceremonial calendar, the 365-day solar calendar, the 584-day cycle of Venus, and the 780-day cycle of Mars.

At the time the mural was created, Xultún was suffering through a period of intense drought. Throughout the region, cities were collapsing. In times of difficulty, the Maya turned to their leaders for guidance in appeasing the gods. In turn Maya leaders consulted astronomers and scribes, who used a combination of past events and complex arithmetic to predict the future. Placed in this context, the calculations in the mural appear to have been a practical response by the people of Xultún trying to make sense of what was happening.

While it is impossible to know the Maya’s intentions with exact certainty, one thing is clear: on December 22, the world will still be here. As for the myth of 12/21/2012? We predict We predict the end is near.

To learn more about Maya priests’ take on 2012, visit: www.cs.org