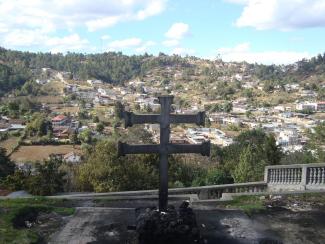 Author
Danielle DeLuca
In Momostenango, a small town in the highland region of Guatemala, the Quiche Mayan community did not enter the 2012 year dreading doomsday predictions. Instead, they’re gearing up for their biggest party yet.
Momostenago has a total of 10 sacred altars. On important days of the Mayan calendar, these prayer spaces are packed with Indigenous Mayans coming to make their offerings, pray, and celebrate special occasions, such as the initiation of the planting season, a marriage, a birth, or the opening of a new business. At each sacred site we visited on a sunny Tuesday afternoon, smoke was still rising from piles of smoldering ashes, surrounded by blackened clay pots, traditionally used to encircle the burning of different “offerings,” like essential oils, herbs, incense, corn, sugar, and colored candles. The popularity of the altars is evidenced by stores that have popped up at each site, selling the items used in prayer. Don Celso, the owner of one such store, said he receives visitors throughout seven days of the 20-day Mayan month; each prayer site has its own special use. On the hill in front of his store, people come between the days of Kawoq and Kame, to pray for fertility, for rain, or to communicate with ancestors.
According to Julian Velazquez, a Mayan spiritual guide and the director of community radio station Stereo Maya in Momostenango, the community is planning to celebrate the change of the 2012 cycle a lo grande: “big time.” An association of spiritual guides to which Velasquez belongs is getting together at the end of this month to begin planning activities for the nine-day celebration of Oxlajuj B’aqtun, as the December 21, 2012 calendar date is known to Mayans. Oxlajuj B’aqtun translates to 13 cycles of the cycle called B’aqtun, the longest cycle, consisting of 144,000 days, a benchmark of roughly 5,129 years which also coincides with the completion of a 26,000 year celestial cycle.
Velasquez was adamant: “I want to send a message to everyone in North America, and in the rest of the world: You don’t have to be afraid, because 2012 isn’t going to end the world. [There will be] a new era of peace. The Hollywood movies are full of lies. Maybe the filmmakers weren’t listening when they asked about 2012, or maybe they got it from a bad source. But they are taking advantage of our culture, and profiting from it.”
Velasquez is wary of how different groups are using 2012 for their gain. Guatemala’s new president, General Otto Perez Molina, evoked the new era of Oxlajuj B’aqtun in his inauguration speech as an indicator of how he will bring change to the troubled country. Yet, Molina took office on January 14th, the Mayan day of Tijax, which is considered a day of suffering. “I appreciate that the General referenced the Maya in his speech, and recognized that we are in a period of change, but I don’t agree with the President’s appropriation of 2012. We would have liked to hear him say that the government will allow all of the Mayans to celebrate in the way that they wish—free to broadcast the ceremonies across community radio stations without persecution, and that the celebration will unfold from our own history, language, culture, and through our own customs.”
Listen to an interview with Julian Velasquez on President Molina’s use of 2012: www.culturalsurvival.org/news/guatemala/2012-does-mayan-calendar-predict-end-world.