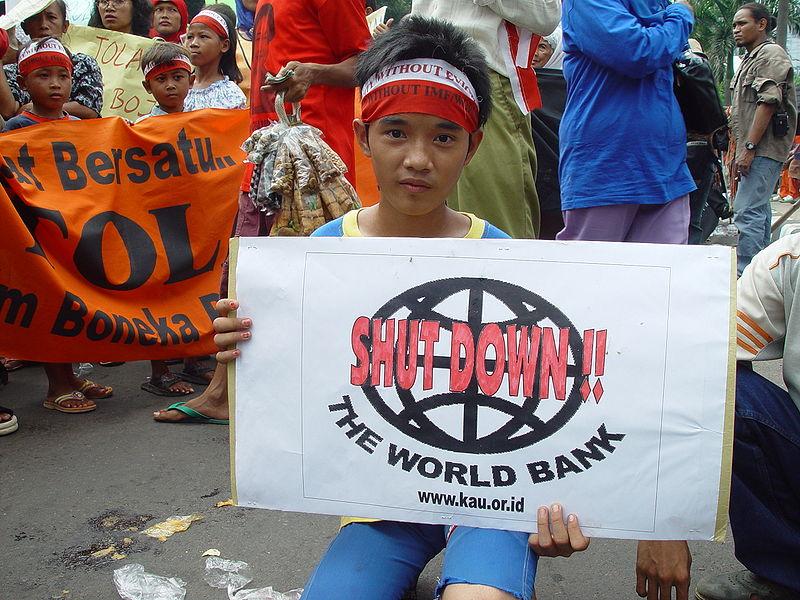 The World Bank has finally responded to pressure from NGOs, rights activists and grassroots groups calling on an end to financing for land grabbing projects that allow the leasing of huge tracts traditionally occupied by the world's poorest and most disenfranchised to make way for large-scale corporate agriculture projects. In their statement, released at the close of this week's World Bank Conference on Land and Poverty, Bank President Dr. Jim Yong Kim announced, "The World Bank Group shares these concerns about the risks associated with large-scale land acquisitions. “Securing access to land is critical for millions of poor people. Modern, efficient, and transparent policies on land rights are vital to reducing poverty and promoting growth, agriculture production, better nutrition, and sustainable development.  He conceded that more efforts "must made to build capacity and safeguards related to land rights—and to empower civil society to hold governments accountable.”

The World Bank has been a key investor in land grabbing scandals across the developing world, despite their stated principles respecting Indigenous People's right to Free, Prior and Informed Consent before projects that affect their lands.

Oxfam International has said the World Bank is in a unique position as both a financier and adviser to developing countries to ensure land deals are transparent and not forcing local communities off land they have farmed for generations.  According to Oxfam, more than 60 percent of investments in agricultural land by foreign investors between 2000 and 2010 were in developing countries with serious hunger problems.  In these cases, food produced are not for sale locally but get exported to international markets."The bank can set an example to investors and government that could help put a stop to these human rights abuses and ensure that investors genuinely help boost development in some of the poorest communities," Jeremy Hobbs, Oxfam's executive director, said.

One of the controversial investments of the World Bank that is linked to land grabbing is its support for Ethiopia's Protection of Basic Services program. This government fund has been conducting a 'villagization' process in Gambella, Ethiopia that forcibly and violently removed Anuak and other Indigenous Peoples from their traditional lands to make way for foreign investment.  An independent panel has been appointed to investigate claims from the refugees.  The Guardian reports:

In a letter sent to the panel in September, the refugees say some people have been forcibly relocated from their land, which is now being leased to foreign investors.  "These mass evictions have been carried out under the pretext of providing better services and improving the livelihoods of the communities," says the letter. "However, once they moved to the new sites, they found not only infertile land, but also no schools, clinics, wells or other basic services."  It says the government forced them to abandon their crops just before harvest, and they were not given any food assistance during the move. "Those farmers who refused to implement the programme … have been targeted with arrest, beating, torture and killing," the letter says.  The refugees say they "have all been severely harmed by the World Bank-financed [project], which is contributing directly to the Ethiopian government's villagisation programme in Gambella region".

The World Bank continues to deny evidence that their funds are linked to villagization and says they haven't encountered any human rights violations in the area.