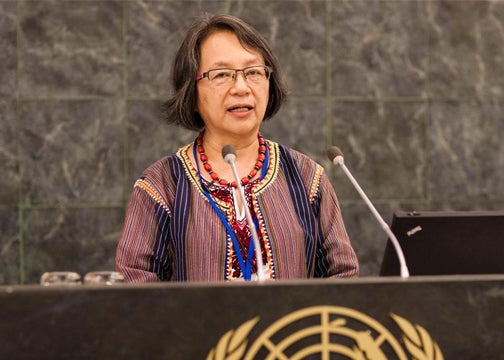 On February 21, 2018, the government of the Philippines filed a legal petition to have a number of organizations, associations, and leaders declared as terrorist and outlaws pursuant to the National Security Act of 2007. To the shock of the world, this includes UN Special Rapporteur on the Rights of Indigenous Peoples Victoria Tauli-Corpuz and Joan Carling, co-convener of the Indigenous Peoples Major Group on Sustainable Development, as well as 600 other Indigenous human rights defenders from across the country. Terri Hansen spoke with Victoria Tauli-Corpuz about the allegations.

Terri Hansen: Do you have serious concerns about your safety?

Victoria Tauli-Corpuz: Yes, of course I do. One can never know what the government is capable of doing, especially in a context where extrajudicial killings are becoming more common.

But I am more concerned for others in the government’s petition—which includes activists who have dedicated their lives to advocating for Indigenous rights. Not everyone has the resources to defend themselves legally or the visibility provided by a UN position to argue their case. Under the Convention on the Privileges and Immunities of the UN—which the Philippine government ratified—I should not be subjected to such accusations and cases as I am fulfilling my mandate as a UN expert.

Unfortunately, being labeled a “terrorist” or “criminal” is a common challenge for Indigenous leaders around the world. The lands we have long protected and depended on are often targeted for industry, mining, logging, or agriculture without our consent—or designated as protected areas even though it is our sustainable management that has kept the forests standing.

When we stand our ground and refuse to leave our ancestral homes, we often face criminalization. In my case, I believe the government’s attempt to label me a terrorist is in retaliation for speaking out against the treatment of the Mindanao Indigenous Peoples in the Philippines.

TH: When did you learn that Duterte's administration had listed you as a terrorist?

VTC: I found out last week when a media person asked if she could interview me on this issue. It was the first time I had heard of such a petition, so she sent me a copy of it.

Since then, the government has doubled down on its position, saying it has a “basis” for the accusations—even though I have never been involved with the groups mentioned in the petition. I am looking into legal options to counter this clearly false accusation, and will continue to do everything I can to advocate for others innocent people included in the government’s petition. The Office of the Legal Affairs of the United Nations is also expected to look into this.

TH: Do you fear for further retaliation against the Mindanao Indigenous Peoples?

VTC: I am very concerned about escalating violence against the Mindanao Indigenous Peoples, the Lumad. Indigenous Peoples in other parts of the country are also facing similar situations, although not on the scale seen in Mindanao. The Lumad have faced a long history of threats from agriculture, mining, and industrial operations, typically with the Philippine government enforcing company claims on Indigenous lands. Indigenous Peoples’ livelihoods, cultures, and very lives are at stake when they lose their lands. Recent military operations have driven thousands from their homes, a situation I urge the government to immediately put a stop to. This is causing irrevocable damage to Indigenous lives and livelihoods.

VTC: I think in a situation where governments in various countries are moving toward authoritarianism and fascism, the international community of states and non-state actors have to join forces to denounce and stop this.

Special Rapporteurs, like me, are mandated to examine how states are implementing their duties and so if we observe that there are violations we have to speak up. We also provide technical assistance for states to implement their human rights duties. This is one reason why we carry out country visits and communicate directly with governments. Ironically, as in my case, governments sometimes retaliate when we carry out our mandates. So if those mandated to protect human rights are harassed and repressed, there should be an outcry against these acts as well.

I thank Cultural Survival for speaking in my support. I hope there will be many more individuals and institutions following your example.

-- Terri Hansen is a member of the Winnebago Tribe. She has covered Indigenous Peoples’ issues since 1993. Hansen’s focus is science and the environment. She has reported on climate change in tribal communities since 2008, and on Indigenous participation in the annual UN climate summits since the COP15 in Copenhagen in 2009. Follow her on Twitter @TerriHansen.