The Privatization of Arctic National Wildlife Refuge is a Violation of Gwich'in Rights to Free, Prior and Informed Consent 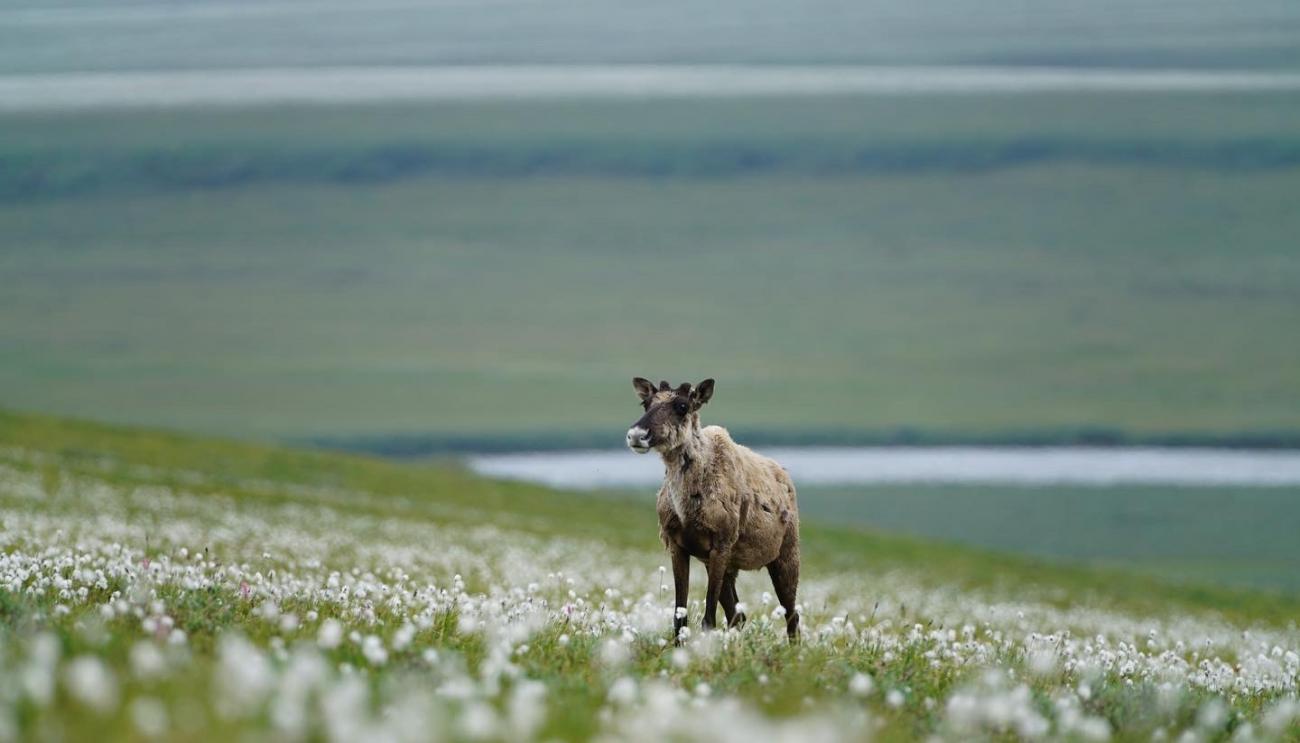 “We are caribou people. Caribou are not just what we eat; they are who we are. They are in our stories and songs and the whole way we see the world. Caribou are our life. Without caribou we wouldn’t exist.”  -Sarah James, Gwich’in Elder

On January 6, 2021, the Trump administration held a lease sale to sell off and privatize lands within approximately 1.6 million acres of the Arctic National Wildlife Refuge for oil and gas development. This violent land-grab has been in the making for decades as oil and gas companies have pushed for drilling rights, despite constant resistance by Gwich’in Peoples, Indigenous to this land, along with other Indigenous rights and environmental advocates. The Alaska Industrial Development and Export Authority placed the highest bid, acquiring nine of the eleven tracts that were leased. Not only does the Arctic National Wildlife Refuge provide essential habitat to porcupine caribou as well as gray wolves, polar bears, musk oxen, and migratory birds from six continents, it is also sacred to the Indigenous Gwich’in people whose homelands this land comprises. The Gwich’in refer to this land base as “The Sacred Place Where Life Begins,” and it is “critical to the survival of the Gwich’in people, who depend on the Porcupine caribou herd that calves their young there for their food security and way of life.” Polar bears, who are a threatened species, have lost much habitat as sea ice melts, and an estimated one-third of the polar bears’ maternal dens reside within the area up for sale. This sale comes in the wake of US Geological Survey Director James Reilly delaying the release of results of his own study on the impact of gas and oil drilling on polar bears’ survival. Trustees for Alaska Senior Staff Attorney Brook Brisson says, “It’s a spider web of industrialization that will destroy land, water, and wildlife habitat that has sustained animals and people for millennia, and that will push carbon pollution into a region suffering the worst impacts from industry-caused climate change.”

Some environmental groups and others are calling the sale a “failure” in the context of former President Trump’s and private companies’ sales goals. Only 11 of 22 tracts for sale were actually sold, none of them to major oil companies, and the $14 million raised is a mere fraction of the projected $1.8 billion, which was budgeted to offset the Trump administration’s tax cuts. The funds would also have been considered by many to be a boon to Alaska’s state economy. Factors contributing to the limited sales included declines in oil and gas prices and the refusal to invest in the land purchases by some of the world’s major banks, including Deutsche Bank, Goldman Sachs, Chase, and Wells Fargo. This trend of divestment is an important one, signaling the growing success of a movement to defend the Arctic and Indigenous Peoples’ stewardship and reciprocal relationship with their lands, territories and natural resources.  A spring 2020 Pew Research survey of US adults found that a majority of respondents support renewable energy sources as opposed to oil and gas development. The Gwich'in Steering Committee and coalition of advocates highlight these data as another indicator that Arctic Refuge drilling is unpopular and makes neither environmental nor business sense.

Yet despite its failure to deliver what the Trump administration promised and its poor outlook for job creation and economic benefits in Alaska, this sale has catastrophic ramifications. The Washington Post calls it “one of the most significant environmental rollbacks the president has accomplished in his term.” In November 2020, the United Nations sent a letter to the United States as a follow-up to a 2019 report to the UN Committee on the Elimination of Racial Discrimination (CERD), enumerating some of the key threats this development poses and announcing its investigation of the process. The letter states that information received by the committee alleges that “permitting to lease the area for oil and gas development will cause irreparable harm to the environment and the Gwich’in, in particular their right to health, adequate food, education, freedom of religion, and that it will increase the risk of violence against Indigenous women. It is further alleged that the domestic legal framework does not provide an adequate forum to address the negative impact of these measures on the human rights of the Gwich’in People, and that the United States has continually failed to consult with the Gwich’in or to seek their Free, Prior and Informed Consent.” Cultural Survival was part of the coalition of organizations, along with First Peoples Worldwide, Land is Life, and the University of Colorado’s American Indian Law Clinic, that partnered with the Gwich’in Steering Committee to request the CERD take action in 2019 and provided updates to the CERD on these recent developments.

Furthermore, the Gwich’in Steering Committee’s Executive Director, Bernadette Demientieff, shared, “‘The Gwich’in people have defended our sacred lands for thousands of years, and we will not stop now. In their push to sell off our lands to the fossil fuel industry, the Trump administration has engaged in a corrupt process and disrespected and dismissed the Indigenous people. We will continue to fight this illegal sale in court, and we call on President-elect Biden to act immediately to protect our lands from destructive drilling once and for all. This process was done in a sloppy and very embarrassing way. Especially to the indigenous people of Alaska and Canada. Listening to corporations and ignoring the tribes shows that they put profit before people. No amount of money is worth losing our identity and way of life. This fight is far from over.’”

Kaila Druck, Gwich’in Youth Council Fort Yukon/Chalkytsik Alaska, said, “Our elders directed us to protect the Porcupine Caribou Herd calving grounds and to never trample the sacred lands where they give birth. Those who push for drilling on this place disrespect our knowledge, our way of life, our elders and our future. We will forever protect this place.”

Moreover, the Gwich’in Steering Committee submitted a follow-up letter to the CERD on January 11, 2021, following the lease sale, pointing out that “[w]hen the U.S. government finalizes these lease sales, it will be nearly impossible for the Gwich’in to invalidate the lease sale and to prevent permanent destruction to the area.” President Joe Biden’s transition website announced that in the initial days of his administration he would direct the Interior Department to place a “temporary moratorium on all oil and natural gas leasing activities in the Arctic National Wildlife Refuge.” He signed an executive order to achieve this on his first day in office.

Cultural Survival joins the Gwich’in Nation in thanking the Biden-Harris administration for this step. We also call on Biden to honor his campaign promise by taking steps to permanently protect the refuge and to ensure compliance with a robust process requiring Free, Prior and Informed Consent from the Gwich’in People and with all Indigenous Peoples prior to implementation of all development projects on their lands.

On his first day in office, President Joe Biden signed an executive order yesterday directing the Interior Department to place a “temporary moratorium on all oil and natural gas leasing activities in the Arctic National Wildlife Refuge.” Cultural Survival joins the Gwich'in Steering Committee in thanking the Biden-Harris administration for this important step. We also call on Biden to honor his campaign promise by taking further action to permanently protect the refuge and to ensure compliance with a robust process requiring Free, Prior and Informed Consent from the Gwich’in People and with all Indigenous Peoples prior to implementation of all development projects on their lands.