A Path Forward: Respecting Free, Prior and Informed Consent 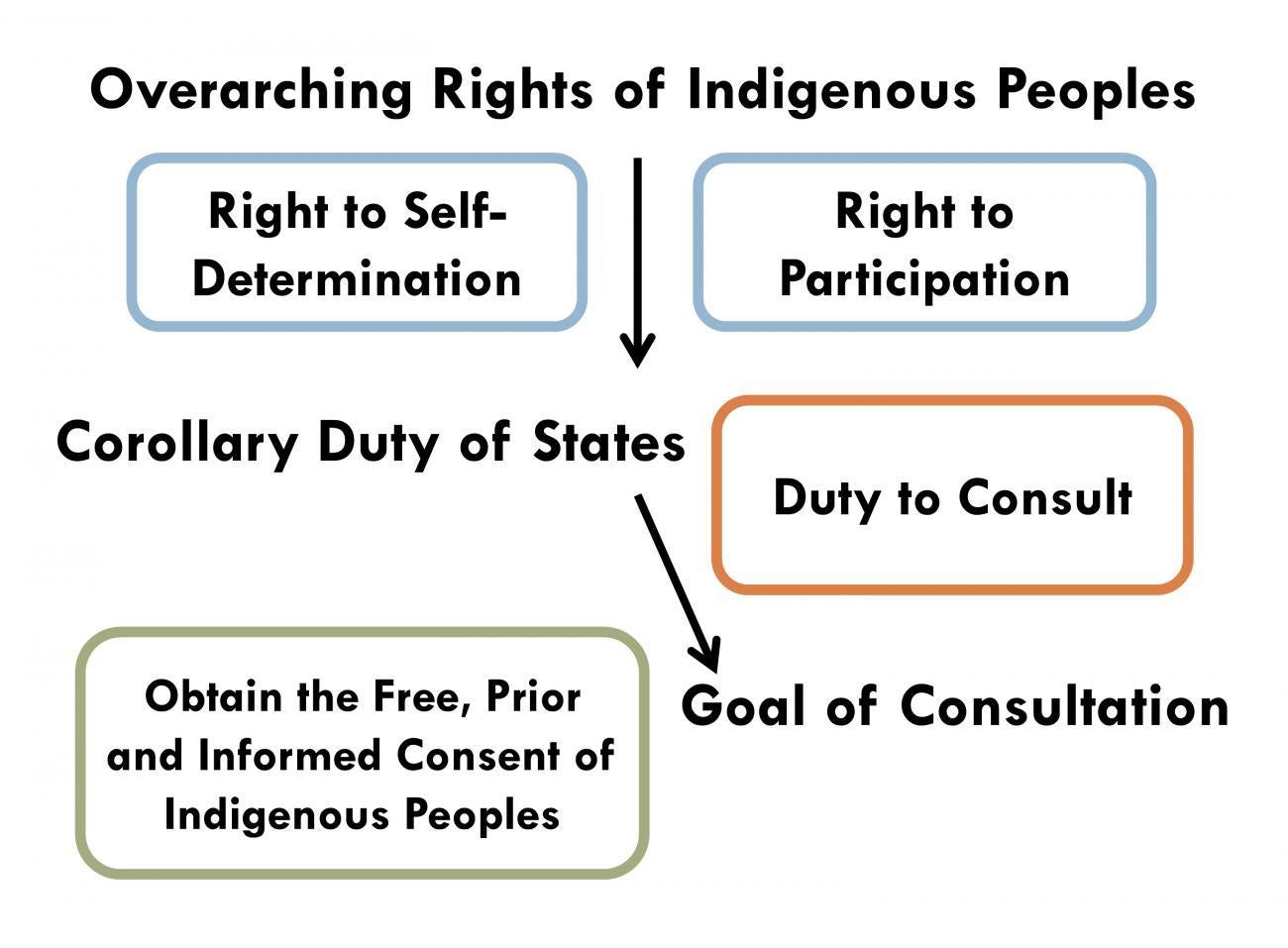 Free, Prior and Informed Consent (FPIC) remains among the most controversial regulatory mechanisms created to manage professional economic and social relationships between Indigenous communities and external parties.

From the moral and legal point of view, any community must be able to make an autonomous choice – a decision free of any form of cohesion - when placed in a position of becoming a subject to action potentially harmful to its members. In practice, governments, as a rule, assume responsibility for the welfare of its citizens; citizens’ consent is embedded in legal and political institutions of the state into which a person is born. In other words, citizens delegate their right to consent to the governing officials who represent their interests and welfare, in principle.

Indigenous politicians question legitimacy of the states’ institutions of governance as means of regulation of the lives of Indigenous men and women. They stress that citizenship has historically functioned in the majority of contemporary states as an instrument of assimilating and dispossessing Indigenous communities. Indigenous men and women were not the original parties to making current institutions of governance of their respective states; they do not share the same values as the rest of the state populations.

Indigenous leaders are determined to preserve forms of governance that historically developed in their communities. They appeal to the right to self-determination enshrined in the UN Declaration on the Rights of Indigenous Peoples, and supported by a number of international legal instruments. Free, Prior and Informed Consent remains the primary mechanism to defend Indigenous political, economic and cultural interests when it comes to projects happening on Indigenous lands, and/or affected communities.

“The potential and meaning of FPIC is enshrined in the three pillars of the UN Declaration on the Rights of Indigenous Peoples: Indigenous right to self-determination, to lands and resources, and cultural rights,” explains Elsa Stamatopoulou, director of Indigenous Peoples’ Rights Program at Columbia University and a veteran of the Indigenous movement. “The power of consent is all-encompassing. Right to Free, Prior and Informed Consent is like the banks of the river through which the rest of the rights will flow.”

Looking back on the history surrounding the negotiations of the content of FPIC within the UN Permanent Forum on Indigenous Issues, Stamatopoulou stresses how politically sensitive this theme has been and remains at the UN. “Given the potential of this instrument to allow communities to say “no” to and stop government decisions concerning their lives, a number of states continue to resist advancement of FPIC,” Stamatopoulou states. “Indigenous advocates, on the other hand, continue to push forward and ensure that the right to consent can become an integral part of relations concerning Indigenous Peoples’ rights and lives, as indicated in the UN Declaration on the Rights of Indigenous Peoples that devotes six articles to FPIC.”

The relevance of this struggle gains significance in light of numerous violations of Indigenous rights across the world.

In Russia, for example, construction of a gas pipeline Nord Stream-2 from Russia to Germany, is currently planned to cross the territory of the Indigenous Izhora and Vod’, as well as the Kurgalsky Biodiversity Reserve. The construction will entail cutting down the forest and destroying the wetlands, which in turn will affect cultural and subsistence practices of Indigenous men and women living on these lands, and ruin the habitat to rare species of birds, animals, and plants of the reserve. Despite the availability of an alternative route, and also the joined protests of environmental and Indigenous rights activists, the Russian government approved the project being determined to maintain its dominance in the European gas market; the regional officials likewise justify the project as benefitting the larger citizenry.

In the Bolivian Amazon, the Chepete-Bala hydroelectric dam project on the Beni River, threatens to flood 48 Indigenous and peasant communities, displacing thousands of people, as well as affecting Madidi National Park home to a number of protected plant, animal and bird species. The government’s justification for the project, is likewise, economic: the 35 dams planned to be constructed are to export energy to Brazil and thus support the country economy, which is dependent (like Russia) on export of natural resources, and with this project, electricity.

In the United States, construction of the Dakota Access Pipeline Project on the lands of the Great Sioux Nation, expedited with the advance of President Trump, remains a source of harm to Tribal communities, threatening sacred sites and causing water pollution. The protests of the Tribal members defending their rights led to violence and criminalization of the protestors.

In all three cases, the projects violate rights of Indigenous Peoples, secured by international law as well as their respective states’ jurisdiction. Indigenous leaders and activists stressed the significance of obtaining consent from communities affected by these projects during the latest session of the UN Permanent Forum on Indigenous Issues in April 2018. They demanded states and industries to comply with FPIC principles, raising attention of international communities to these Indigenous and environmental rights abuses.

The relevance of FPIC also extends to the protection of Indigenous cultural rights, which are as important to Indigenous self-determination as rights to lands and resources, despite that ethical and legal powers of this mechanism have been usually discussed in relationship economic and land issues. Today, most memory institutions continue to function in support of their respective state governments’ in denial of rights to Indigenous Peoples. State archives maintain control over records that document histories of dispossessing Indigenous Peoples and reducing them into non-dominant polities and systematically oppressed societies.  Museums preserve their privilege in shaping public perception of Indigenous histories, keeping Indigenous artifacts in their possession and interpreting Indigenous pasts and ways of being from non-Indigenous perspectives. Research libraries and institutions carefully guard access to print and digital materials created in Indigenous territories, and/or with Indigenous participation vesting the right to Indigenous knowledge in states and/or research and industry communities. These practices support the social and cultural disparity by depriving Indigenous men and women from the right to equitably benefit from their cultural and intellectual resources.

FPIC has potential in affording Indigenous men and women the right to represent their past; to shape contemporary political and cultural discourses concerning their communities; and to benefit from research conducted on their lands and with their participation. “The potential of FPIC to defend rights of Indigenous Peoples goes beyond negotiations over lands and resources, and is as significant when it comes to intangible property, and particularly protection of Indigenous rights to traditional knowledge,” says Kiri Toki, and Indigenous Fellow (2017-2018) at the World Intellectual Property Organization (WIPO). “Traditional knowledge (TK) and traditional cultural expressions (TCEs) that are in the public domain are usually not protected, regardless of how it came to be publicly available in the public domain. Here FPIC may become critical to protect the interests of Indigenous Peoples with respect to TK that is in the public domain. In the Intergovernmental Committee on Intellectual Property and Genetic Resources, Traditional Knowledge and Folklore, the WIPO member states are negotiating how to better protect TK and TCEs and FPIC  features in these discussions. For example it has been included in a proposed definition of ‘misappropriation’ in the TK draft text,” says Toki.

Further, cases of collaboration between professionals willing to engage with Indigenous communities and Indigenous Peoples in ethically sound ways, bring forth exciting practices of conducting relationships between communities and institutions in good faith and in light of FPIC principles.

In Australia, the Aboriginal and Torres Strait Islander Library, Information, and Resource Network professionals have been collaborating with Indigenous communities since the 1990s to guide memory institutions on how to interact with the Aboriginal and Torres Strait Islander Peoples whom they serve. This work produced a set of principles and norms of conduct, specified in the Aboriginal and Torres Strait Islander Protocols for Libraries, Archives and Information Services, that influenced development of policies and practices of working with Indigenous communities in and outside of Australia. Consent is one of the main principles of designing and conducting information practices and services for Indigenous men and women in Australia.

In the United States, developments in support of Indigenous rights to knowledge, led primarily by Indigenous professionals concluded with the development of Protocols for Native American Archival Materials (2006) that have since informed North American archival and library professionals on the significance of obtaining consent from Indigenous communities when it comes to caring for Indigenous tangible and intangible heritage. Recent collaboration between the U.S. museum professionals and communities led to creation of Museum + Community Guidelines intended to guide Indigenous communities in ways of collaborating with museums to ensure protection of Indigenous cultural rights. “These projects, while relatively small in scope, provide a basis for FPIC to be used to develop and extend guidelines for library, archive and museum professionals working with Indigenous knowledge and culture in digital spaces,” says Ashley Evans Bandy, a graduate student at the University of California, Los Angeles in the Department of Information Studies. “While FPIC has not often been explicitly named as a principle in  contemporary cases, the tendency of memory institutions to consult both local and international protocols speaks to how FPIC could serve as inspiration and guidance, particularly for online and digitization projects. Addressing digital collaboration directly could have a ripple effect, encouraging engagement with not only UN protocols, but with local protocols specific to an Indigenous community, while also acknowledging that the digital can have cultural and economic impacts on an Indigenous community.”

These practices are also informing state officials, industry and research professionals on ways of working with Indigenous communities in good faith that in the end will benefit all citizenry. Indigenous politicians – while expressing their struggle in the language of self-determination – in practice seek ways to support equality of inclusion. Indigenous struggle over the recognition of FPIC expresses issues that go beyond Indigenous-state relationships, and aims at restitution of historical justice; at revising contemporary institutions of governance toward ensuring equality of inclusion, and thus in support of political, economic and cultural rights and freedoms of citizens. From that perspective, the struggle over recognition of FPIC, ultimately is an effort in support of peaceful internal relationships among different cultural groups living within the boundaries of one state.

--Ulia Gosart (Popova) is a descendant of Udmurts in Russia. She has been an Indigenous rights advocate for more than a decade, beginning with her service to LIENIP, an umbrella Indigenous rights organization located in Russia. Ulia teaches at University of California, Los Angeles, Department of Information Studies. Her latest work on the situation of Indigenous Peoples in Russia can be found here. 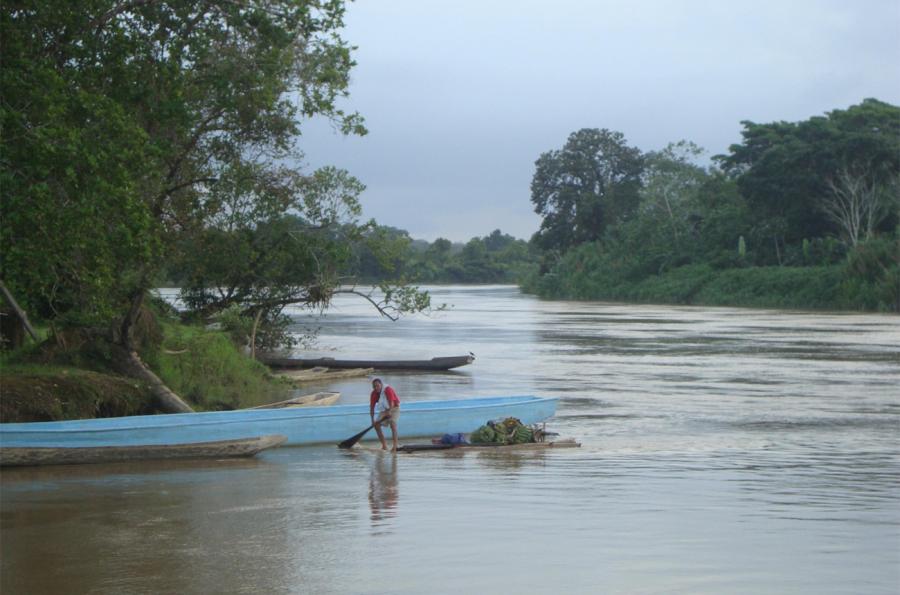 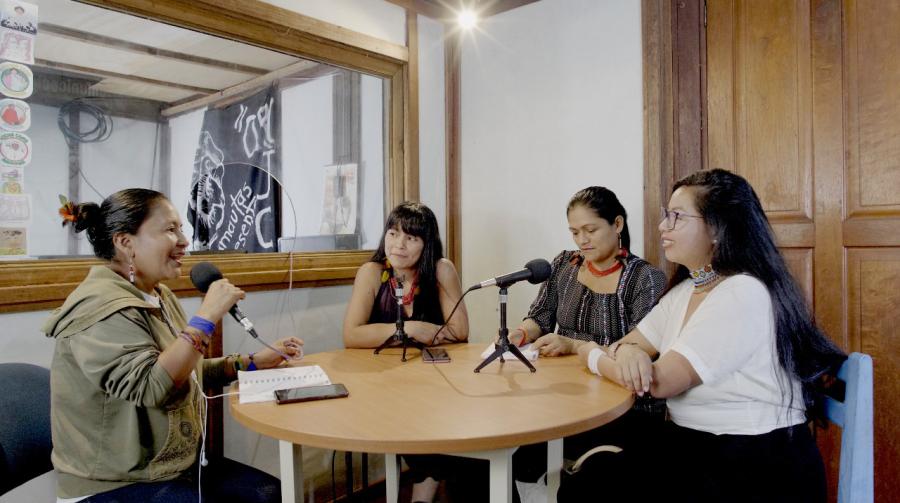 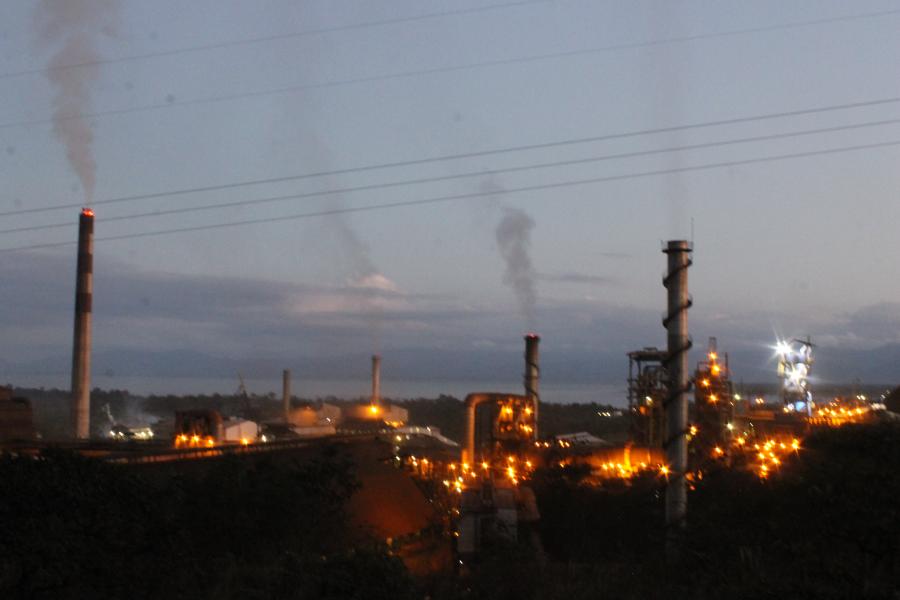