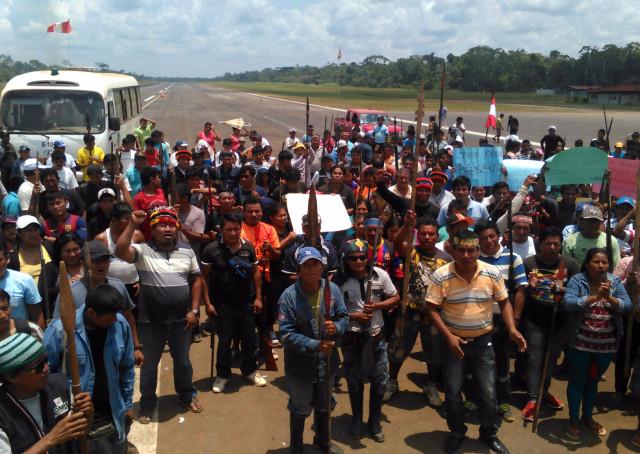 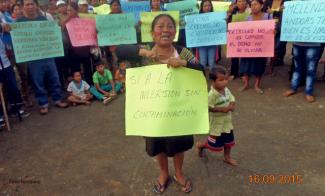 On September 12, 2015, hundreds of people from Quechua, Achuar and Kichwa communities of the Pastaza, Corrientes, and Tigre rivers united to form a peaceful protest at the site of the Andoas airport in the Upper Pastaza region of Loreto where Lot 192 has its headquarters. Using their bodies to block the landing strip, mothers, children, elderly and others occupied the space for a total of 12 days.

The peaceful protest  is a response to the abuse at the hands of the Peruvian state in its inability to comply with the Right to Prior Consultation on Lot 192, the country’s largest oil producing block which is has been issued to a new oil company after the existing concession expired after 45 years of exploitation. Dialogues pursuing a process of consultation with communities were declared ‘concluded’ in late August just as the concession expired on August 29.  A new deal was reached with Canadian company Pacific Stratus to operate the concession for the next two years.  The communities have declared that they are not protesting against Pacific Stratus, nor oil extraction in general. They understand the value of oil to the Peruvian economy, but insist that the industry be held to standards that do not continue to affect their environment and poison their children.

“Every Peruvian knows that no one likes to be at strike, because it disturbs the peace and also puts our lives and the lives our our children at risk, given the usual policies of repression from the State of Peru. However, our communities are obligated to strike because the state, once again, has gravely abused our rights. This is a flight for our dignity, this is a fight for our sons and daughters!’’ declares the first point of a statement by the Quehua, Achuar, and Kichwa Peoples on September 16.

“We are the living ancestors of these territories and we know these lands like the back of our hands. Since Saturday the 12th of September, we have felt obligated to station ourselves peacefully in various points of the territory, including the airport, and various oil wells, stopping one hundred percent of the oil production of Lot 192.”

In addition to the failed consultation, the statement highlights a breach of the March 10 contract made by the State to respond to the State of Emergency that was declared on their lands in 2013 and 2014.  At that time, an agreement had been established that the State would provide land titles, environmental remediation, and health services to communities affected by toxic environmental contaminants resulting from the oil industry.

The protest, hosted on Quechua lands, included communities of neighboring villages and river systems who came to support the Quechua and protest alongside them.  “Almost everyday, from the Corrientes River, the Achuar arrive to the protest. They come to visit the Quechuas, to share food they have hunted and fished from their territories. The Achuars arrive to lament in unity about the attitude of the state that refuses to recognize them as owners of their own destinies.  Someone in Lima believes that the government can decide for [Indigenous Peoples], decide that behind Indigenous Peoples homes, in the forest they inherited from their ancestors, petroleum be produced in exchange for money dripping in contamination and destruction,” wrote Mario Zúñiga, Tami Okamoto y Peter Rodriguez for PUINAMUDT.

“Representatives of the State have the opportunity to not repeat the exclusion committed during so many years against our communities, and to show those who want violence and destruction that as Peruvians, we know how to live in harmony, in equity, and in multiculturalism. We have the opportunity to close an era of exclusion, racism, lies and inequality, and recuperate together the spirit of Buen Vivir. We want to dialogue for a healthy land, for the lives of our children and children yet to come, for the well being of the Indigenous Peoples of Peru, for the future, for mutual respect, and for our dignity as Indigenous Peoples and as Peruvians.”

On September 24, the demonstration was called to an end by an agreement made during a visit by the Minister of Housing, Construction, and Remediation, Milton von Hesse.  Among the agreements made, were a commitment to comply with the March 10th act,  execution of new development projects for the region, prioritizing land titling, and new investments in clean water decontamination, and electricity. Time will tell if these agreements are respected. Meanwhile, as Pacific Stratus takes control, reports of oil spills have already started to come in from Indigenous environmental monitors who patrol the forests watching for signs of spills.