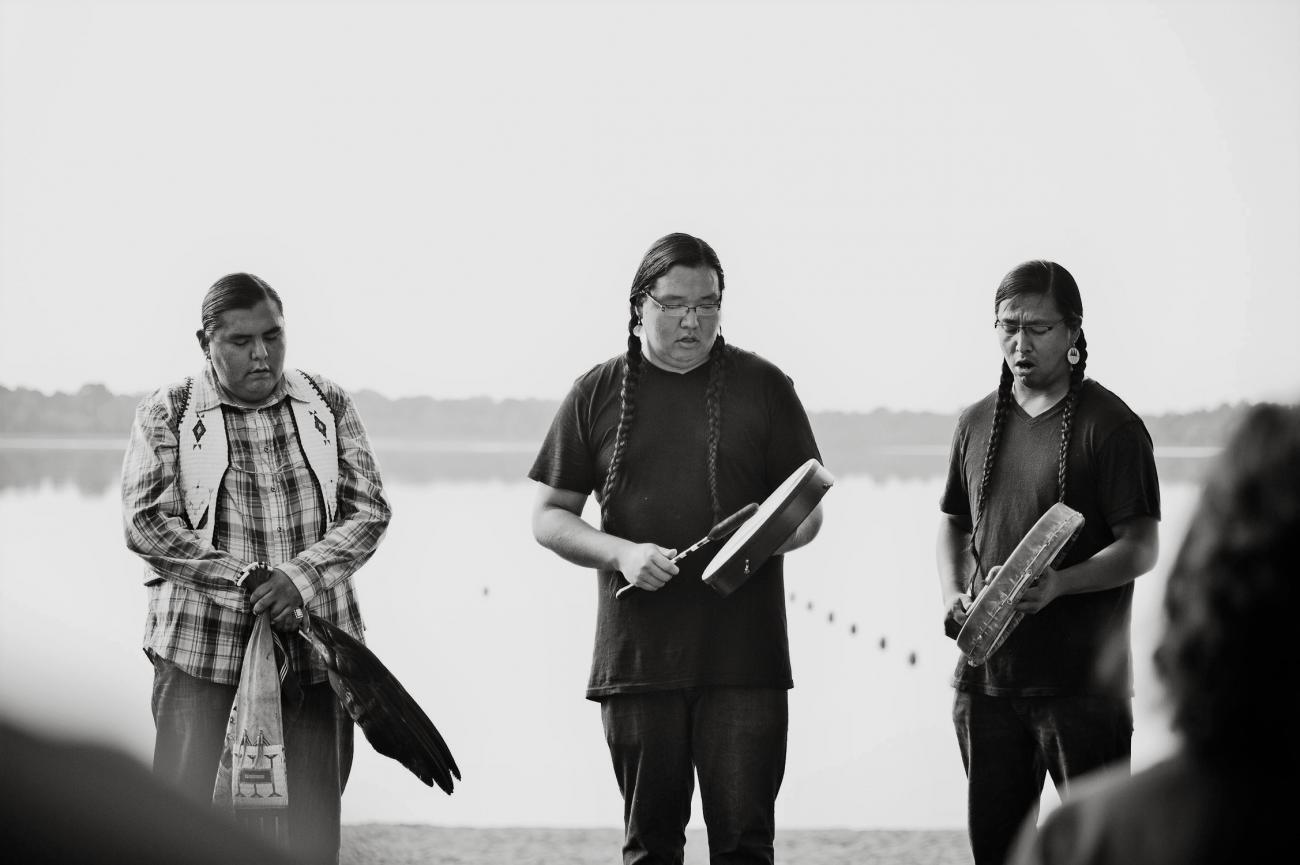 “What seed might we plant together today that could make the most difference to the future of the Indigenous Peoples’ Water Summit?” 26-year-old Thorne LaPointe asked a group of about 50 Indigenous youth, elders, and non-Indigenous supporters at the inaugural Mni Ki Wakan: World Indigenous Peoples’ Decade of Water Summit. The discussion question, posed on the third day of the summit, was emblematic of the tone, structure, and values that guided the entire event. The Mni Ki Wakan, “Water is Sacred” in the Lakota language, Summit was held on July 31- August 2, 2017, in Minneapolis, MN. The international event marked an exploratory first step upon a 10-year journey toward realizing an Indigenous-led, ecologically sustainable future of restoring clean and healthy water. Indigenous and non-Indigenous Peoples, primarily youth, collectively began the interactive process of visioning and designing a Mni Ki Wakan World Water Agenda, laying out transformative possibilities to work towards in the coming years. 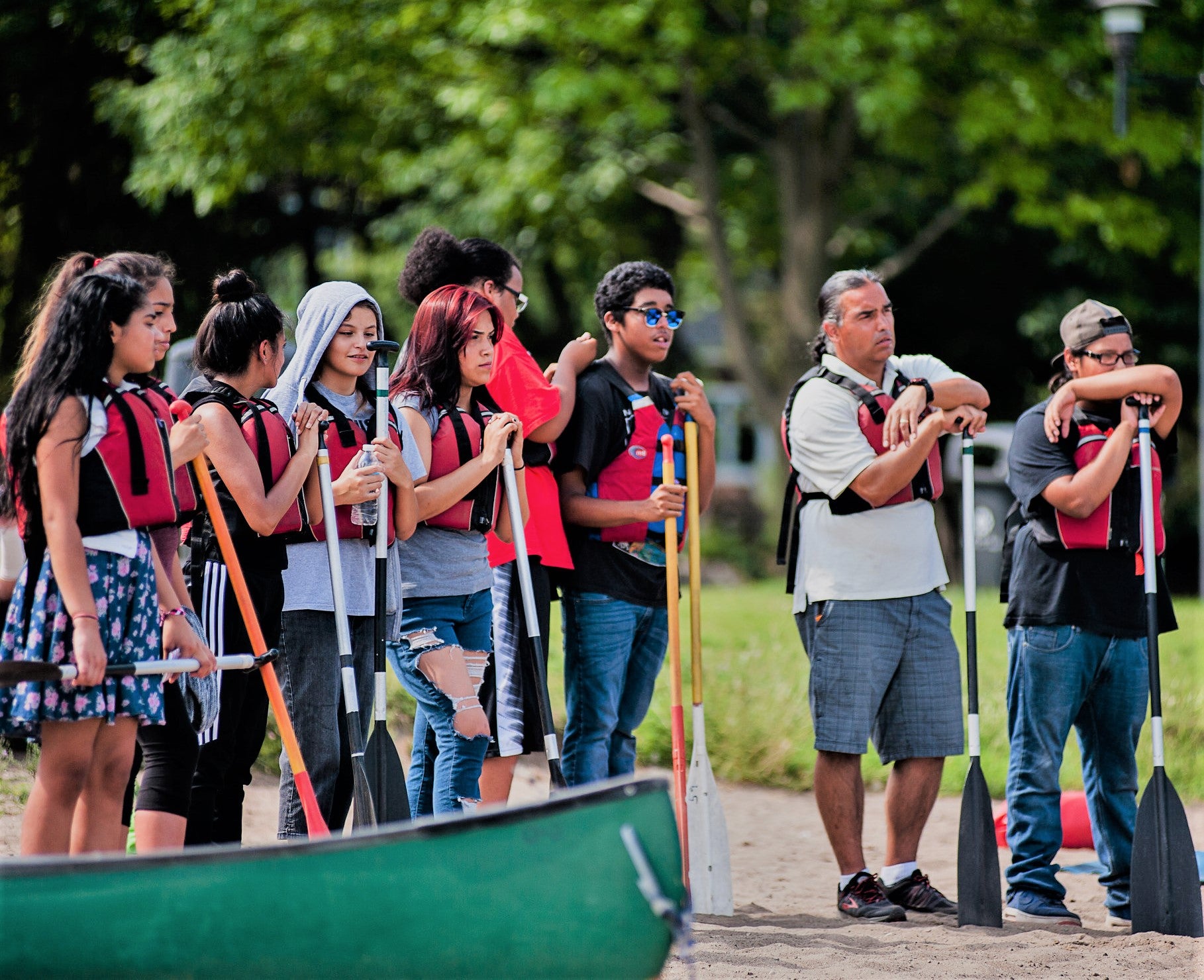 Sicangu Lakota organizers of the summit welcomed representatives of over 15 Native Nations to Minneapolis for a three-day event dedicated to sharing their visions regarding the future of water in their communities. While delegates and organizers stressed that each nation’s approach must vary depending on its circumstance, all agreed that the future depends on water that is safe, clean, and respected. The participants interactively envisioned a Mni Ki Wakan world water agenda for the coming years, based on the understanding that a continuing examination of possibilities could liberate the transformative wisdom of Indigenous Peoples, youth, and communities through future summits.

The focus was on Indigenous youth and their hopes and visions for their communities, which face diverse situations in relation to water and their rights. Adults and elders provided supportive, nourishing presence, their insight, experience, and confidence in the youth guiding exploration of the young people’s own experiences and visions for the future.

One Lakota elder, Sandra Little, said, “I’ve heard a number of times where the youth have felt disconnected from us elders. It doesn’t have to be that way. To be able to put that down and connect with elders in their community or within their own families, it takes two. I know the elders want to speak to the youth and be involved with them. I think it’s a two-way street. We’re there with the wisdom, encouragement and direction they need sometimes. I know that there are a lot of grandmothers out there that raise their grandchildren and great-grandchildren. We just need to reach for each other and connect.” 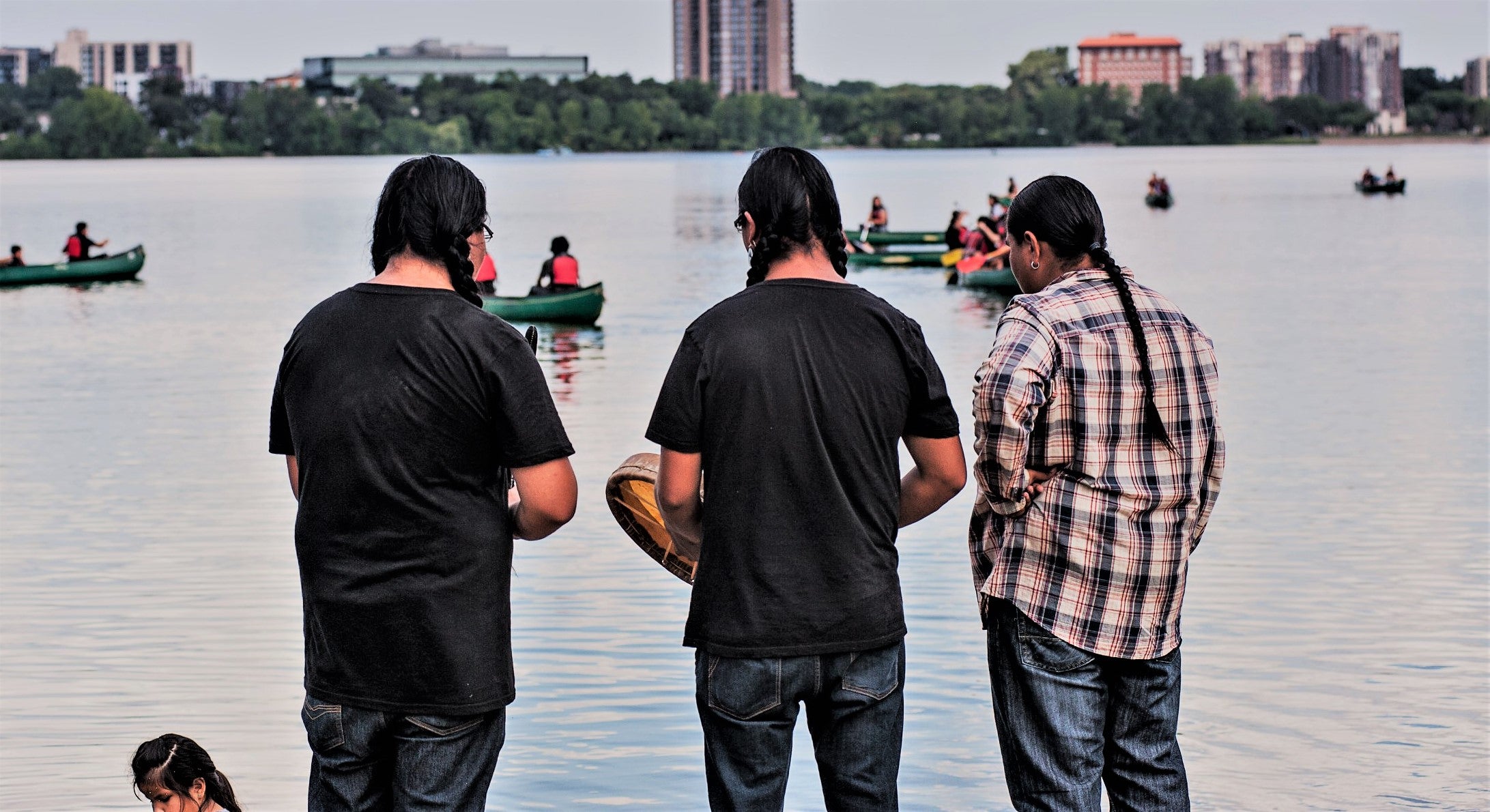 The summit was an example of the two-way street Little referred to. Throughout, youth and elders exchanged with each other and among themselves. By intentionally facilitating these intergenerational exchanges, and by structuring the event around values-based guiding questions and deeply personal conversations, the organizers ensured that the event was Indigenous in form as well as in content. They specifically shied away from the term “conference” because of its associations with a westernized, often-hierarchical structure. The event opened with prayer, and each attendee was asked to share a value that they carried with them to the event. Some of these included “respect,” “equality,” “love for the next generation,” “compassion,” and “we are all related.”

The Mni Ki Wakan: World Indigenous Peoples’ Decade of Water Summit, the first of ten events planned through 2026, was inspired by scores of local, urban Indigenous youth of diverse Tribal Nations who, in 2008, paddled the sacred waterways of their Dakota predecessors throughout present-day Minnesota. These scouting expeditions explored the feasibility of offering more multi-day cultural adventures for youth. In 2009, the Mde Maka Ska Canoe Nations Gathering was held primarily within the boundaries of Minnesota’s largest city of Minneapolis, upon the ancestral lands of the Dakota Nation, to enable hundreds of Indigenous youth to participate in group-oriented experiences that would otherwise not be available to them. This event continues today. In 2015, a series of collective visioning and value sessions, known as the Mde Maka Ska Community Conversations, focused on recovering clean and healthy water and restoring, through the power of Indigenous patience, the original names upon Great Lake waterways. Throughout the course of these historical developments, a delegation of Sicangu Lakota  journeyed annually to the United Nations Permanent Forum on Indigenous Issues (UNPFII). On May 19, 2016, in a UNPFII statement, the delegation invited the international Indigenous community to the first world water forum in Minnesota, USA. 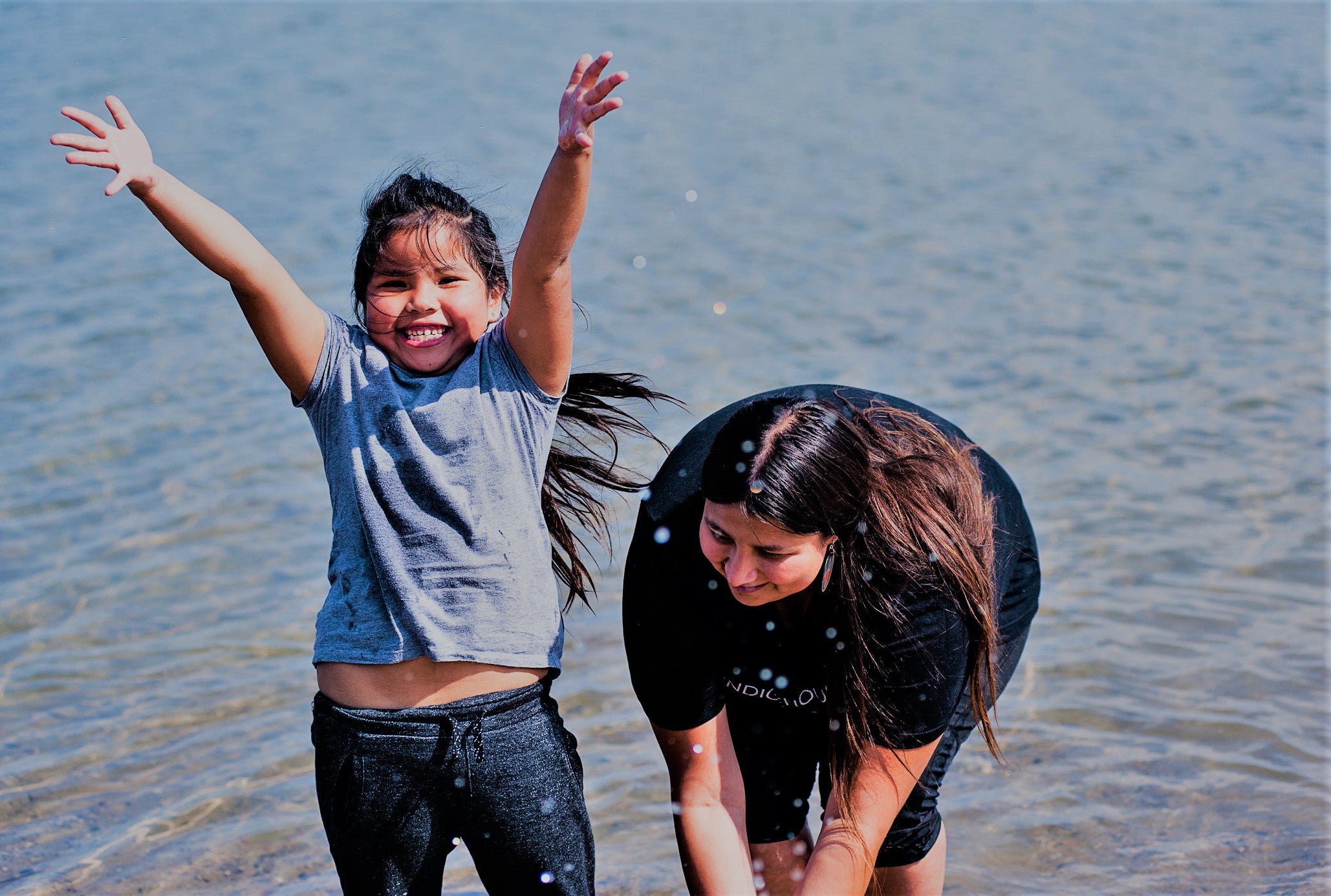 The first day of the Summit brought 33 local and visiting Indigenous youth to an early morning Four Sacred Directions Water Walk around Mde Maka Ska (White Earth Lake, the Lakota name for what is known in English as Lake Calhoun) and a canoe paddle across three lakes. The second two days were full of powerful, intimate visioning, along with talks and poetry by local Indigenous presenters, and intimate musical and dance performances by 17-year old Tla’amin water activist Ta’kaiya Blaney of British Columbia, Canada, and Dakota dancers Daryl and Ariel Kootenay of Alberta, Canada.

Blaney was among about a dozen Indigenous youth who had traveled from out of town to attend the Summit. Emerging as an Indigenous leader and musician when she was just eight years old, Blaney has spent the eight years since attending and presenting at multiple UN events and TEDX talks and has combined her activism and her music to make powerful statements about Indigenous Peoples’ rights and lands. After summit co-organizers Wakinyan and Thorne LaPointe were featured in a Cultural Survival piece in 2014 on Indigenous youth leaders, they read on in the article to learn about Blaney’s commitment to Indigenous youth and children. They knew then that they wanted to work with her at some point, and when they began planning the summit, they invited her to be a keynote presenter.

Throughout the event, water’s meanings and sacredness were a constant theme, and Blaney explained how her name embodies her people’s reverence for water. “My name is Ta’Kaiya; it is a formal way of addressing water in which you are recognizing its inherent sanctity. The literal translation into English is “that water over there.” The reason why is because when we recognize water we are referring to a sacred concept and something that is fundamental to our existence, whereas English doesn’t necessarily have the gravity to the term. [W]ith the values of my elders that have been instilled in me, which have traveled from generation to generation since what we refer to as “time immemorial,” always existing in a way of gratitude to land and that which gives us life, there is an idea of indebtedness in our culture, that you are indebted to what sustains you, to the water, to the air, to the land. It’s an interdependence, interdependent relationship. In Indigenous activism it goes one step further than what we call ‘environmentalism,’ because it’s an idea that we’re not just trying to nurture the land as a resource but interject ourselves back into a broken cycle of dependence on the land and the land’s dependence on us as caretakers and stewards.” All of the youth, many of whom had never attended an event like the Summit before, were fired up to act on the energy generated together and to bring it home with them, excited to be in a space where they could connect with other Indigenous people who were passionate about protecting water in ways based on Indigenous values. Amber Fineday, a 16-year-old from the Fond du Lac Reservation two and a half hours north of Minneapolis, said, “What motivated me to come to the water summit is that my water is sick and I want to raise awareness and try to fix it. Five months ago we were told by the reservation that [the water is] dirty and if you drink it, you’ll get sick. All these elders and children were getting sick and they didn’t know why so they tested the water. We have to go to the community center to get water for us.” Fineday proposed a Facebook group to keep summit attendees and others engaged once everyone had returned home. She committed to talking to people at her Tribal Council and with her school principal to find ways of getting others in her community involved in efforts to protect water. When asked what skills she has to continue this work, she said, “I get nervous in front of crowds but when it’s really time to get down to it, I will go up there and be like listen, this is what we are here for. I think I’m a leader and I don’t know, I’m just here to raise awareness.”

James Freedman, another teen from the Fond du Lac Reservation, was motivated to participate in the Summit because “everybody deserves a healthy planet and we’re only here for a short time so we have to keep it preserved well for the future generations of our families.” Asked about what will make him a leader in this movement for water, Freedman said, “I come from a family that generally likes to live off the land. We usually rice every season, we get syrup. And I just love nature and I love cleaning up the lakes when I’m able to. Everything just intrigues me and keeps me wanting to be involved.”

Kalila Rampanin, who identifies as Cree, Finnish, and a member of the Nuu-chah-nulth First Nation in Canada, said, “Where I live, water is everywhere for us. We all live in a rainforest. I just grew up on the water, ever since I was born. We do a lot of spiritual practices; we do a thing called [Usinge?] and it is basically a spiritual cleanse, you go and bathe in the ocean everyday and brush off and pray. Water is a really good medicine for us. It’s very sacred to me.”

Fifteen-year-old Katie Miquadace’s goals for next year’s meeting of the summit include helping new attendees and continuing to learn. She is excited to work on publicizing the water summit back home at Fond du Lac, saying she likes helping other people. To a question about why youth involvement in this work is important, Miquadace said, “It’ll help for the future; the future is what we’ve got.”

Wrapping up the summit, prior to a closing prayer, co-organizer and longtime community leader, educator, and rights activist Lemoine LaPointe gave the youth some advice to take home with them. “Above all, just stay united for our values. These cannot die because this is what keeps that fuel, that light [in] you burning. It’s what causes you to walk into a room and everyone in that room can feel you emanate with the power and the positivity that you really are. Don’t let anyone take that away from you. Don’t let anyone dim your lights! We, as Native people in particular, have been through that. We have a bright light that the creator placed in us, a nagi, a spirit. Let’s keep it. The only way to keep it is by standing united. One of my grandfathers said, ‘Healing cannot take place alone.’ So we must stand together and understand that the wisdom of our grandfathers, forefathers, predecessors, is good and wise.” His son and co-organizer Thorne LaPointe added, “You youth came here and with your best efforts really helped us to design this. We said it was going to be a water summit designed by our people. We didn’t come there with a premade agenda of how exactly it was going to play out, how it was going to look. We all come from distinctive nations and however big or small our efforts may be that we go home to, we make a difference. We have to understand that we are one. There is a saying: ‘Many people in many places undertaking many tasks can change the world.’ There are 374 million Indigenous people worldwide – that’s 374 million gifts, strengths, and possibilities. Leave knowing that you have a community with you, you are not alone. We are in this together, joined together in common causes.”