What Is Important: Indigenous Youth Speak 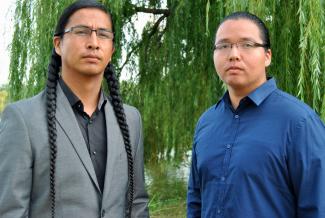 At this year’s UN Permanent Forum on Indigenous Issues, Cultural Survival radio producers interviewed dozens of delegates about the issues pertaining to their communities and their work. The following are excerpts from three interviews with youth delegates.

Thorne (23) and Wakinyan LaPointe (24), Lakota brothers of Rosebud, South Dakota, are American Indian Movement (AIM) West delegates whose community development efforts aid youth “to further their goals in their communities and reflect their values as Native Peoples” by reconnecting them with the land. In their words, the brothers want to “develop and integrate relevant cultural aspects as well as build political, economic, and social bodies that will provide the influence and political power that Indigenous youth need.”

Thorne explained: “We want to remind young people that Indigenous People are strength-based. We show them the strengths that our people have had since time immemorial on these lands. We seek for our youth a transformative experience, the experience that our ancestors had before us...Too often our youth are too focused on the deficits that they say we have. They say that we’re the poorest of the poor; that’s all that our youth grow up and see. They internalize it. We want to teach them to grow our nations in a sustainable way.”

Wakinyan added, “One of our education programs with Indigenous youth in the Minnesota area is a long-term project called Mde Maka Ska; to the Dakota that translates to ‘White Earth Lake.’ It’s part of a body of water that they hold sacred. What we aim to do is simply help reconnect youth with the importance, the sacredness, of water and also the land. Often in the urban areas that these Dakota children live in, there’s a diminishment of that relationship to the land. So enhancing their experiences with the water through canoeing, through visiting with their elders near the water, or interacting with other Native youth from different tribes on land and sharing stories—learning and re-learning to visit again is the most sustainable way that we see in strengthening the values of the Dakota people.”

When youth go into nature with the LaPointe brothers, Wakinyan said, “they learn that the sort of values they picked up in an urban, artificial environment are not sustainable. They’re forced to re-evaluate what they do and who they are in relation to the natural world; what kind of choices they want to make that are sustainable to them and their families. They derive that sense of future from the interactions and relationships they’ve built with the land and its life forms.”

The brothers impart their traditional values, language, and stories as a way of strengthening the impact of this education. “We’ve found what really sticks with them is their language,” Wakinyan said. “When we take them out into a natural setting and use even just one word, you tell a story to that word, reconnecting youth with their origin. Their stories provide them with experiences to give a basis for their values as Indigenous people. We see the international human rights framework as a base to help support that continued learning for Native youth.” Thorne added, “Engaging them in the natural world and showing them how to fight politically, legally for their rights as well, that’s a very powerful thing.”

Tsykarev recently attended the World Conference on Youth and was impressed by the attendance: 1,500 participants representing every country in the world, including the UN President of the General Assembly; Special Envoy on Youth of the Secretary General; and the President of Sri Lanka. The main topic of the conference was the post-2015 development agenda; in Tsykarev’s words, “how youth, including Indigenous youth, can contribute to the preparation of sustainable development goals. I hope that Indigenous voices will be heard through this very important document.”

Tsykarev stressed the importance of language for youth development; he and his colleagues recently submitted a study on language and culture for the promotion and protection of the rights of Indigenous Peoples. “For me, it’s a very important study,” he said. “Language and culture are very important for mentality, for self-identification as Indigenous persons. In my movement of Indigenous Peoples, we come to build language preservation and language development and we, as Indigenous communities, need support from the UN. In my republic, we have so few families in which parents transfer our Native language to children, from generation to generation. We have so few youth who can speak our language.”

Tsykarev said he has faced backlash for his efforts to incorporate Native language into school curriculums. “If we teach Native language to children, the government is concerned that these children cannot go to school and learn effectively because we have no education in Native language. They can learn Russian everywhere. But they should get also Native language, because this is very important for the development of a child. It’s good for their brain. In language exists a code for culture, for mentality.”

Blaney’s passionate speech highlighted the challenges faced by Indigenous youth today: “Children under 18 account for 61 percent of the Indigenous population, the true majority and foundation of Indigenous societies. For centuries, our nations have sustained the familiar cycles of poverty and cultural extinguishment, as well as inadequate healthcare and education, infant mortality, drug abuse, language loss, distance from self-sustaining traditional practices, and suicide. Due to the continuation of historic exclusion, attacks on our cultures, and discrimination, Indigenous youth are subjected to colonization and the devastating after-effects of residential and boarding schools. Indigenous youth are a product of our communities, and so these negative factors become parts of our identity and discriminate against our human rights.”

Blaney proposes an Indigenous Children’s Fund specifically to address culture and language: “because when a language dies, the sense of community and belonging, especially in a youth perspective, dies along with it;” health: “because all Indigenous children are most likely to die under the age of five than live to be an adult in all regions of the world;” education: “in 2009, over 60 percent of Indigenous youth had not completed high school in Canada;” environment, poverty, and well-being: “isolated Indigenous Inuit youth communities alone commit the highest rates of suicide in the world;” and sport: “[this is] a fundamental human right integral to maintaining healthy human relationships [and] a way to help disputes between states.”

The children’s fund incorporates “all essential elements of a youth’s medicine wheel of healthy living: spiritual, mental, emotional, and physical activities.” As Blaney explained, “Our elders are dying before they can effectively pass down the culture. [And so] we recommend the creation and establishment of the Native Children’s Survival Indigenous Children’s Fund, which includes an elders, youth, and children advisory board to exchange wisdom, tradition, and opportunity between the generations. Indigenous Peoples are in a constant hidden war with governments, and children fall victim to such hidden wars.” Blaney hopes to fill a void where existing programs have failed, as she said, “to recognize the essential importance of re-establishing culture in the lives of Indigenous children so we may become successful.”